Viaticum is a term used especially in the Catholic Church for the Eucharist (communion) administered, with or without anointing of the sick, to a person who is dying, and is thus a part of the last rites. According to Cardinal Javier Lozano Barragán, "The Catholic tradition of giving the Eucharist to the dying ensures that instead of dying alone they die with Christ who promises them eternal life."[1] For Communion as Viaticum, the Eucharist is given in the usual form, with the added words "May the Lord Jesus Christ protect you and lead you to eternal life". 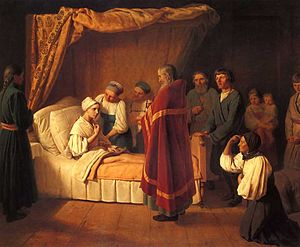 The word viaticum is a Latin word meaning "provisions for a journey," from via, or "way." The Eucharist is seen as the ideal spiritual food to strengthen a dying person for the journey from this world to life after death.

The desire to have the bread and wine consecrated in the Eucharist available for the sick and dying led to the reservation of the Blessed Sacrament, a practice which has endured from the earliest days of the Christian Church. Saint Justin Martyr, writing less than fifty years after the death of Saint John the Apostle, mentions that “the deacons communicate each of those present, and carry away to the absent the consecrated Bread, and wine and water.” (Just. M. Apol. I. cap. lxv.)

If the dying person cannot take solid food, the Eucharist may be administered in the "species" of wine alone, since the bread and wine are the Body, Blood, Soul and Divinity of Christ.

Alternatively, viaticum can refer to an ancient Roman provision or allowance for traveling, originally of transportation and supplies, later of money, made to officials on public missions; mostly simply, the word, a haplology of viā tēcum ("with you on the way"), indicates money or necessities for any journey. Contrary to church doctrine, during late Antiquity and the early medieval period the host was sometimes placed in the mouth of a person already dead, perhaps owing to traditional superstition[2] that scholars have compared to the pre-Christian custom of Charon's obol, a small coin placed in the mouth of the dead for passage to the afterlife and sometimes called a viaticum in Latin literary sources.[3]

Finally, viaticum can also refer to the enlistment bonus received by a Roman legionary, auxiliary soldier or seaman in the Roman Imperial Navy.