From Infogalactic: the planetary knowledge core
Jump to: navigation, search
This article is about the Danish city. For the Russian town, see Vyborg.

Viborg (Danish pronunciation: [ˈʋib̥ɒːˀ]), a city in central Jutland, Denmark, is the capital of both Viborg municipality and Region Midtjylland. Viborg is also the seat of the Western High Court, the High Court for the Jutland peninsula. Viborg Municipality is the second-largest Danish municipality, covering 3.3% of that country's total land area.[2]

Viborg is one of the oldest cities in Denmark, with Viking settlements dating back to the late 8th century.[3] Its central location gave the city great strategic importance, in political and religious matters, during the Middle Ages. A motte-and-bailey-type castle was once located in the city. Viborg takes its name from a combination of two Old Norse words: vé, meaning a holy place, and borg, meaning a fort.

Before the Protestant Reformation Viborg was the home of five monasteries,[5] about 12 parish churches, several chapels and of course the cathedral. Today only the cathedral and a few remains of the Franciscan and the Dominican monasteries are left.

Viborg has over the last decade won a reputation as one of Denmark's leading cities for sports. It started with the city's women's handball team (a popular sport in Denmark), which continues to be one of Europe's top-5 clubs. Subsequently, both the men's handball team and most notably the professional football team have established themselves at the top of the Danish leagues. From 1998 to 2008, Viborg FF was a constant member of the Danish Superliga, reaching an all-time high when winning the Danish cup in 2000.

Viborg is home to a number of educational institutions, including Viborg Katedralskole (cathedral school). Denmark's oldest educational institution celebrated its 900th birthday in 2000. The school is believed to have been founded about 1060 - at the same time as the city became the seat of a bishop. The church needed to educate boys and young men to enter into the church's service, and to that purpose it created a school. Its current monumental home was built in 1926 to accommodate a larger number of students and later the school added a dormitory to house the many students from outer regions or islands not close to a gymnasium. Although this role is now basically obsolete, the dorm continues to be a popular solution for many students wanting to get away from home or for a small number of students from Greenland. Viborg Katedralskole is today one of four gymnasiums in Viborg.

Viborg is also home to The Animation Workshop, an art school based in a former army barracks on the outskirts of town. The school, which achieved official recognition from the Danish government in 2003, offers students a Bachelor of Arts in character animation. 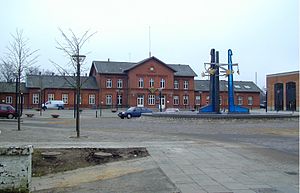 Viborg is served by Viborg railway station. It is located on the Langå-Struer railway line and offers direct InterCity services to Copenhagen and Struer and regional train services to Aarhus and Struer.

In the science fiction book The Corridors of Time by Poul Anderson, a Danish-American writer who did considerable research on Danish history, a large part of the plot takes place in 16th-century Viborg. The protagonist - an American time traveller from the 20th century - arrives in the city in 1535 and gets involved with the adherents of the overthrown King Christian II and of the peasant rebel leader Skipper Clement, who face savage persecution in the city.

Viborg is also the setting of "Number 13", a ghost story by the English writer M.R. James.

Viborg is twinned with: