From Infogalactic: the planetary knowledge core
Jump to: navigation, search
For other uses, see Vincentia (disambiguation).

listen (help·info) (Venetian: Vicensa) is a city in northeastern Italy. It is in the Veneto region at the northern base of the Monte Berico, where it straddles the Bacchiglione River. Vicenza is approximately 60 kilometres (37 mi) west of Venice and 200 kilometres (120 mi) east of Milan.

Vicenza is a thriving and cosmopolitan city, with a rich history and culture, and many museums, art galleries, piazzas, villas, churches and elegant Renaissance palazzi. With the Palladian Villas of the Veneto in the surrounding area, and his renowned Teatro Olimpico (Olympic Theatre), the "city of Palladio" has been enlisted as UNESCO World Heritage Site since 1994.[2]

In December 2008, Vicenza had an estimated population of 115,927[3] and a metropolitan area of 270 000. Vicenza is the third-largest Italian industrial centre as measured by the value of its exports, and is one of the country's wealthiest cities,[2][4] in large part due to its textile and steel industries, which employ tens of thousands. Additionally, about one fifth of the country's gold and jewelry is made in Vicenza, greatly contributing to the city's economy. Another important sector is the engineering/computer components industry (Federico Faggin, the microprocessor's co-inventor, was born in Vicenza).[5]

The citizens of Vicetia received Roman citizenship and were inscribed into the Roman tribe Romilia in 49 BC. The city was known for its agriculture, brickworks, marble quarry, and wool industry and had some importance as a way-station on the important road from Mediolanum (Milan) to Aquileia, near Tergeste (Trieste), but it was overshadowed by its neighbor Patavium (Padua). Little survives of the Roman city, but three of the bridges across the Bacchiglione and Retrone rivers are of Roman origin, and isolated arches of a Roman aqueduct exist outside the Porta Santa Croce.

During the decline of the Western Roman Empire, Heruls, Vandals, Alaric and his Visigoths, as well as the Huns laid waste to the area, but the city recovered after the Ostrogoth conquest in 489 AD, before passing to Byzantine rule soon after. It was also an important Lombard city and then a Frankish centre. Numerous Benedictine monasteries were built in the Vicenza area, beginning in the 6th century.

In 899, Vicenza was destroyed by Magyar raiders.

In 1001, Otto III handed over the government of the city to the bishop, and its communal organization had an opportunity to develop, separating soon from the episcopal authority. It took an active part in the League with Verona and, most of all, in the Lombard League (1164–1167) against Emperor Frederick I Barbarossa compelling Padua and Treviso to join: its podestà, Ezzelino II il Balbo, was captain of the league. When peace was restored, however, the old rivalry with Padua, Bassano, and other cities was renewed, besides which there were the internal factions of the Vivaresi (Ghibellines) and the Maltraversi (Guelphs).

The tyrannical Ezzelino III from Bassano drove the Guelphs out of Vicenza, and caused his brother, Alberico, to be elected podestà (1230). The independent commune joined the Second Lombard League against Emperor Frederick II, and was sacked by that monarch (1237), after which it was annexed to Ezzelino's dominions. On his death the old oligarchic republic political structure was restored -a consiglio maggiore ("grand council") of four hundred members and a consiglio minore ("small council") of forty members - and it formed a league with Padua, Treviso and Verona. Three years later the Vicentines entrusted the protection of the city to Padua, so as to safeguard republican liberty; but this protectorate (custodia) quickly became dominion, and for that reason Vicenza in 1311 submitted to the Scaligeri lords of Verona, who fortified it against the Visconti of Milan.

Vicenza came under rule of Venice in 1404, and its subsequent history is that of Venice. It was besieged by the Emperor Sigismund, and Maximilian I held possession of it in 1509 and 1516.

Vicenza was a candidate to host the Council of Trent.

The 16th century was the time of Andrea Palladio, who left many outstanding examples of his art with palaces and villas in the city's territory, which before Palladio's passage, was arguably the most downtrodden and esthetically lacking city of the Veneto.

After 1797, under Napoleonic rule, it was made a duché grand-fief (not a grand duchy, but a hereditary (extinguished in 1896), nominal duchy, a rare honor reserved for French officials) within Napoleon's personal Kingdom of Italy for general Caulaincourt, also imperial Grand-Écuyer.

After 1814, Vicenza passed to the Austrian Empire. In 1848, however, the populace rose against Austria, more violently than in any other Italian centre apart from Milan and Brescia (the city would receive the highest award for military valour for the courage displayed by revolutionaries in this period). As a part of the Kingdom of Lombardy-Venetia, it was annexed to Italy after the 3rd war of Italian independence.

Vicenza's area was a location of major combat in both World War I (on the Asiago plateau) and World War II (a focal centre of the Italian resistance), and it was the most damaged city in Veneto by Allied bombings, including many of its monuments; the civil victims were over 2,000. After the end of the latter, what followed was a period of depression following the devasatation caused by two world conflicts. In the 1960s the whole central part of Veneto, witnessed a strong economic development caused by the emergence of small and medium family businesses, ranging in a vast array of products (that often emerged illegally) that paved the way for what would be known as the "miracolo del Nord-est" (Miracle of the North-east). In the following years, the economic development grew vertiginously. Huge industrial areas sprouted around the city, massive and disorganised urbanisation and employment of foreign immigrants increased.

Vicenza is home to the United States Army post Caserma Ederle (Camp Ederle), also known as the U.S. Army Garrison Vicenza. In 1965, Caserma Ederle became the headquarters for the Southern European Task Force, which includes the 173d Airborne Brigade. In January 2006, the European Gendarmerie Force was inaugurated in Vicenza.

The surrounding country is predominantly agricultural. Major products are wine, wheat, corn, olive oil ( in the Barbarano area ) and cherries and asparagus are a particularity of Bassano. There are also quarries of marble, sulphur, copper, and silver mines, and beds of lignite and kaolin; mineral springs also abound, the most famous being those of Recoaro. Massive industrial areas surround the city and extend extensively in the western and eastern hinterland, with numerous steel and textile factories located in the Montecchio Maggiore, Chiampo and Sovizzo area in the west and Camisano Vicentino and Torri di Quartesolo in the east, areas characterised by a disorganised and extensive cementifaction. Elitè sectors are the jewelry and clothing factories. Important vicentino clothing firms include: Diesel, Pal Zileri, Marzotto, Bottega Veneta, Marlboro Classics etc. The Gold Exposition is world-famous and it takes place in Vicenza three times per year (January, May, September). Other industries worthy of mention are the woollen and silk, pottery, and musical instruments. The headquarters of the bicycle component manufacturer Campagnolo and the protective wear for sports manufacturer Dainese are located here.

In 2010, 83.5% of the population was Italian. From 1876 to 1976 it has been calculated that over a million people from the province of Vicenza have emigrated, with more than 3 million people of vicentino descent living around the world (most common migrational currents included Brasil, United States of America, Canada, Australia, Germany, France, Belgium and Switzerland) escaping the devastation left by poverty, war and sickness. Today nearly 100,000 Vicenza citizens live and work abroad. Today the city has morphed from land of emigration to immigration. The largest immigrant group comes from U.S.A. (about 9.000 people). Other ethnic minorities comes from European nations (the largest being Serbia, Romania, and Moldova), South Asian (the largest being Bangladesh and Pakistan), sub-saharan Africa, and North Africa (largest is from Morocco). The city is predominantly Roman Catholic, but due to immigration now has some Orthodox Christian, Muslim and Sikh followers. 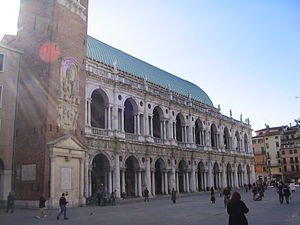 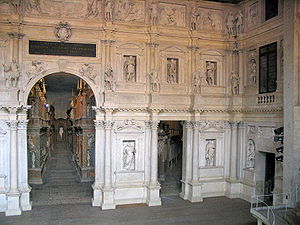 The three-dimensional stage at the Teatro Olimpico in Vicenza 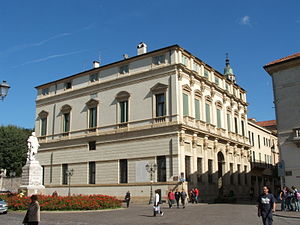 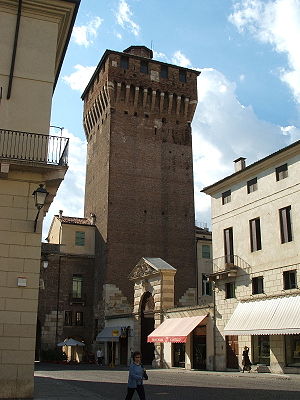 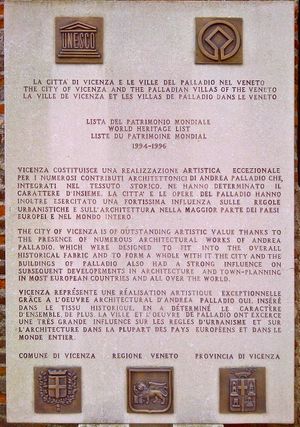 Plaque for Vicenza in the UNESCO World Heritage List

Vicenza is home to twenty-three buildings designed by Palladio. The famous ones include:

Some of the main historical churches:

Vicenza railway station, opened in 1846, forms part of the Milan–Venice railway, and is also a junction of two branch lines, to Schio and Treviso, respectively.

Vicenza is home to Vicenza Calcio who currently play in Serie B. Their home is the Stadio Romeo Menti. Their greatest achievement to date was winning the Coppa Italia in 1997.

Vicenza is home to Rangers Rugby Vicenza, A rugby union team who play in serie A2.

Vicenza is home also to Vicenza Hurricanes American Football team who currently plays in League 2. Founded in 2009, the Hurricanes have a junior team and a senior team with a roster of 35+ athletes. 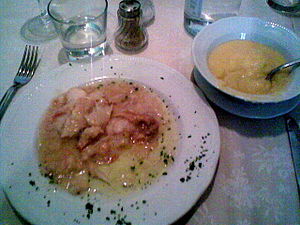 A plate of Baccalà alla vicentina, a typical dish of the city.

Unlike venetian cuisine where fish reigns supreme, game meat, cheeses and vegetables take center stage accompanied by polenta, soft from the stove or day-old sliced and grilled over the fireplace embers, better yet cooked in a pan under the spit where it lightly fries in meat drippings to create a crunchy golden outer crust.

The inhabitants of Vicenza are jokingly known to other Italians as mangiagatti, 'cat eaters'. Purportedly, Vicentinos turned to cats for sustenance during times of famine, such as World War II.

Vicenza is twinned with: