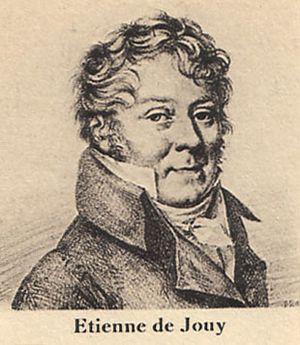 Étienne was born at Versailles in 1764. At the age of eighteen he received a commission in the army, and sailed for South America in the company of the governor of Guiana. He returned almost immediately to France to complete his studies, and re-entered the service two years later. He was sent to India, where he met with many romantic adventures which were afterwards turned to literary account. On the outbreak of the Revolution he returned to France and served with distinction in the early campaigns, attaining the rank of adjutant-general. He drew suspicion on himself, however, by refusing to honor the toast of Marat, and had to flee for his life.

At the fall of the Terror he resumed his commission but again fell under suspicion, being accused of treasonable correspondence with the English envoy, James Harris, 1st Earl of Malmesbury who had been sent to France to negotiate terms of peace. He was acquitted of this charge, but, weary of repeated attacks, resigned his position on the pretext of his numerous wounds.

At some point Jouy married the British born daughter of the novelist Lady Mary Hamilton who had moved to France with George Robinson Hamilton.[2]

Jouy now turned his attention to literature, and produced in 1807 with immense success the libretto for Gaspare Spontini's opera La vestale. The piece ran for a hundred nights, and owing in part to its libretto, was characterized by the Institut de France as the best lyric drama of the day. Other opera librettos followed, including Spontini's Fernand Cortez and Cherubini's Abencérages, but none obtained so great a success. From 1811 to 1814 he published in the weekly Gazette de France a series of satirical sketches of Parisian life, later collected under the title of L'Ermite de la Chaussée d'Antin,[3] ou observations sur les moeurs et les usages français au commencement du xixe siècle (1812–1814, 5 vols.), which was warmly received and made his name as a journalist; he contributed to Le Nain jaune, La Minerve française, Le Miroir, Pandore and L'Obervateur. Étienne de Jouy was also one of the founders of the Biographie nouvelle des contemporains, who encouraged contributions from the young journalist François Buloz whom he had employed in his chemical factory and who would have a distinguished career guiding the Revue des deux mondes.[4]

In 1821 his tragedy of Sylla gained a triumph due in part to the genius of the actor Talma, who had studied the title-rôle from Napoleon; it opened 27 December 1821 at the Théâtre-Français. Under the Restoration Jouy consistently fought for the cause of freedom, and if his work was overrated by his contemporaries, they were probably influenced by their respect for the author himself. He died in rooms set apart for his use in the Château de St Germain-en-Laye, 4 September 1846.

Out of the long list of his opera librettos, tragedies and miscellaneous writings may be mentioned: