Victor Amadeus I, Duke of Savoy 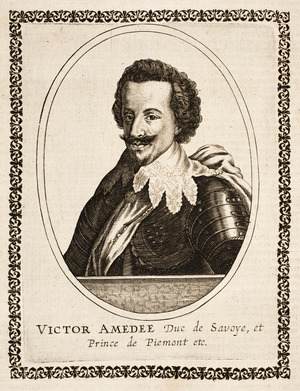 Engraving of Victor Amadeus I

He was born in Turin, Piedmont to Charles Emmanuel I, Duke of Savoy and Catherine Micaela of Spain, daughter of King Philip II of Spain. He spent much of his childhood at the Spanish court in Madrid, at the court of his grandfather Philip II. He stayed there until the king's death in 1598, when Victor Amadeus was 11. When his brother, Filippo Emanuele, died in 1605, he became legitimate heir to the Duchy of Savoy and received the homage of the court at Racconigi on 21 January 1607.[citation needed]

Coat of Arms of the Dukes of Savoy after Victor Amadeus I.

Victor Amadeus became Duke of Savoy after his father's death in 1630. Charles Emmanuel's policies had brought a great instability in the relationships with both France and Spain, and troops were needed to defend the Duchy. As money was lacking to recruit mercenaries or train indigenous soldiers, Victor Amadeus signed a peace treaty with Spain.

With the Treaty of Cherasco, Savoy was forced to give Pinerolo to France. This gave France a strategic route into the heart of Savoy territory and on into the rest of Italy. The rulers of Savoy from that point resented this loss, and worked for decades with the goal of regaining that loss.[2] Subsequently, under the direction of Cardinal Richelieu, Victor Amadeus attempted to create an anti-Spanish league in Italy. He achieved two victories against the Spanish: In 1636 in the Battle of Tornavento and on 8 September 1637 in the Battle of Mombaldone.[citation needed]

On 25 September of that year, Victor Amadeus fell ill after a dinner offered by the Duke of Créqui. He was carried to Vercelli, where he died on 7 October, aged 50.[citation needed]