From Infogalactic: the planetary knowledge core
Jump to: navigation, search
Not to be confused with Victor Cavendish-Bentinck.

Victor Christian William Cavendish, 9th Duke of Devonshire KG GCMG GCVO TD PC JP FRS[1] (31 May 1868 – 6 May 1938), known as Victor Cavendish until 1908, was a British politician who served as Governor General of Canada, the 11th since Canadian Confederation.

Cavendish was born the eldest son of a noble family in London, and educated at Eton College and the University of Cambridge. After the death of his father in 1891, he entered politics, winning his father's riding unopposed. He held that seat until he inherited his uncle's dukedom in 1908. Thereafter, he took his place in the House of Lords, while, for a period at the same time, acting as mayor of Eastbourne and Chesterfield. He held various government posts both prior to and after his rise to the peerage. In 1916 he was appointed governor general by King George V, on the recommendation of Prime Minister H. H. Asquith, to replace Prince Arthur, Duke of Connaught and Strathearn, as viceroy. He occupied that post until succeeded by Lord Byng of Vimy in 1921. The appointment was initially controversial but, by the time of his return to England, the Duke had earned praise for the way in which he carried out his official duties.

Following his tenure as the Canadian viceroy, he returned to political and diplomatic life, serving as Secretary of State for the Colonies between 1922 and 1924, before retiring to his estate in Derbyshire, where he died on 6 May 1938.

Cavendish was born in the Marylebone area of London, England, as the eldest son of Lord Edward Cavendish, himself the third son of the seventh Duke of Devonshire, and Emma Lascelles, both the daughter of William Lascelles and Lord Edward's cousin. Cavendish's younger brother was Lord Richard Cavendish and his uncles were Spencer Cavendish, Marquess of Hartington (later the eighth Duke of Devonshire) and Lord Frederick Cavendish.

Cavendish was educated at Eton College before being admitted to Trinity College, Cambridge, on 30 May 1887,[2] where he served as secretary of the Pitt Club.[3] During his years at Cambridge, Cavendish served part-time with the Derbyshire Yeomanry, into which he was commissioned as a Second Lieutenant in 1890.[4] He was promoted Major in September 1901[5] and retired from the Yeomanry in 1911.[6] 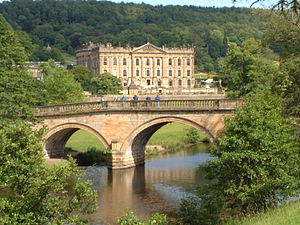 Chatsworth House, which Cavendish inherited upon acceding to the Dukedom of Devonshire in 1908

In May 1891, shortly before Cavendish graduated from Cambridge, his father, who sat as the Member of Parliament for West Derbyshire, died and Cavendish entered the race for that parliamentary seat and won it, thus becoming the youngest member of the British House of Commons at the time.[8]

For seventeen years Cavendish held parliamentary positions. Between 1900 and 1903, he acted as Treasurer of the Household, from 1903 to 1905 as Financial Secretary to the Treasury, and on 11 December 1905 he was sworn of the Privy Council.[9] In 1907, he was appointed a deputy lieutenant of Derbyshire[10] and, from 1908, acted as Honorary Colonel of the 5th (Territorial Army) Battalion of the Sherwood Foresters.[11]

When he succeeded to his uncle's dukedom on 24 March 1908, Devonshire, as he was thereafter known, was disqualified from holding his seat in the commons, as he now held a place in the House of Lords. The same year, Devonshire was appointed as Lord Lieutenant of Derbyshire and the year following was made Chancellor of the University of Leeds. He was then elected to two mayoral offices: first to that of Eastbourne, between 1909 and 1910, and then Chesterfield, from 1911 to 1912. In the House of Lords, Devonshire served as Conservative Chief Whip from 1911[12] and, after the Conservatives joined the government during the First World War, as joint Government Chief Whip in the upper chamber,[13] holding office as Civil Lord of the Admiralty.[14] Following the war, he became Honorary Colonel and Commandant of the Derbyshire Volunteer Regiment of the Volunteer Training Corps in 1918.[11]

It was announced on 8 August 1916 that King George V had, by commission under the royal sign-manual and signet, approved the recommendation of his British Prime Minister, H.H. Asquith, to appoint Devonshire as his representative in Canada. The appointment caused political problems as Canadian Prime Minister Robert Borden had not been consulted on the matter, contrary to practice well established by that time. Borden thus felt insulted, which led to considerable difficulties at the beginning of Devonshire's tenure, officially beginning after he was sworn in on 11 November 1916 during a ceremony held in Halifax.[7]

In that era, there was social unrest in the country. Not only was the women's suffrage movement gaining momentum in Canada and calls were coming out of the prairies for socialist changes to the governmental system, but war continued to rage around the world. Canada was providing troops and supplies, and shortly after his installation, acting on the advice of Borden, Devonshire introduced conscription, a decision that was particularly divisive between French and English Canadians and sparked the Conscription Crisis of 1917. In the same year, the Governor General also travelled to Nova Scotia to survey the damage caused by the Halifax Explosion on 6 December; there he met with survivors and addressed the women of the Voluntary Aid Detachment.[15]

The Canadian victory in 1917 at Vimy Ridge, however, helped fuel Canadian pride and nationalism at home and the Governor General, while conscious of his role's remaining connection to the British government, used this victory to positively and publicly encourage reconciliation between Canada's two main linguistic groups. At all times, Devonshire was careful to consult with his prime minister and the leaders of His Majesty's Loyal Opposition in Canada on matters related to conscription and the war effort.[7]

Devonshire took an active interest in the lives of Canadians, and conducted various tours of the country to meet with them. As a land owner himself, the Governor General was particularly focused on the development of farming in Canada and during his travels,[8] at agricultural and horticultural fairs, shows, and sugaring-off parties in the Gatineau, he discussed agricultural issues with farmers and other people in the industry. His speeches often referred to Canada's potential to lead the world in agricultural research and development, and one of his major projects while viceroy was to establish experimental farms, including the Crown's central one in Ottawa. At the same time, Devonshire acted as a patron of the arts; when not on tour or residing at La Citadelle— the viceregal residence in Quebec City at which the Duke enjoyed spending time— he frequently visited the National Gallery and hosted theatrical performances at Rideau Hall. There, on the grounds of the royal residence, during the winters, the Devonshires also hosted tobogganing and skating parties, as well as hockey matches. Officially, in 1918 Devonshire travelled to the United States to meet President Woodrow Wilson informally, and the following year, he was host to Prince Edward, Prince of Wales, during his first tour of Canada.[7]

By the end of his tenure as governor general, Devonshire had overcome all of the initial suspicions that had surrounded his appointment; both men who served as his Canadian prime minister—Borden and Arthur Meighen—came to view him as a personal friend not only of theirs, but also of Canada's. The former said of Devonshire: "No Governor General has come with a more comprehensive grasp of public questions as they touch not only this country and the United Kingdom, but the whole Empire."[7] The Duke left as a mark of his time in Canada the Devonshire Cup, for the annual golf competition of the Canadian Seniors Golf Association,[16] and the Duke of Devonshire Trophy, for the Ottawa Horticultural Society. While in Canada, Devonshire's two aides-de-camp married his daughters. 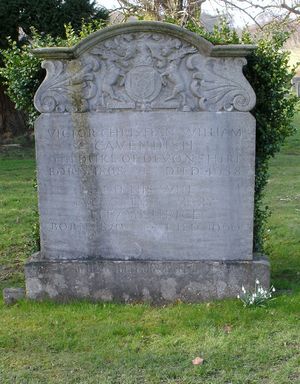 On returning to England, Devonshire worked at the League of Nations before serving from 1922 to 1924 as Secretary of State for the Colonies (with a seat in the British Cabinet) under Prime Ministers Andrew Bonar Law and Stanley Baldwin.[17] In 1922, he was also appointed by King George V to the committee that was charged with looking into how honours were to be bestowed in the United Kingdom.[18] From 1933 until his death he was Honorary Colonel of the 24 (Derbyshire Yeomanry) Armoured Car Company, Royal Tank Regiment, in the Territorial Army.[19] He simultaneously continued to run his agricultural land holdings, especially around Chatsworth House, where he died in May 1938.