Victor Albert George Child Villiers, 7th Earl of Jersey GCB GCMG PC JP DL (20 March 1845 – 31 May 1915), was a British banker, Conservative politician and colonial administrator from the Villiers family. He served as Governor of New South Wales between 1891 and 1893.

Born at Berkeley Square, London,[1] Lord Jersey was the eldest son of George Child Villiers, 6th Earl of Jersey, and Julia Peel, daughter of Prime Minister Sir Robert Peel, Bt. He was educated at Eton and Balliol College, Oxford.[1][2] He succeeded in the earldom in October 1859, aged 14, on the death of his father, who had only succeeded his father three weeks earlier.[2] He became the principal proprietor of the family banking firm of Child & Co.[3]

Lord Jersey served as a Lord-in-Waiting (government whip in the House of Lords) between 1875 and 1877 in the Conservative administration of Benjamin Disraeli. He returned to the government in 1889 when Lord Salisbury made him Paymaster-General, which he remained until 1890.[2] The latter year he was sworn of the Privy Council[4] and made a Knight Grand Cross of the Order of St Michael and St George (GCMG).[1][2]

In August 1890 Jersey was appointed Governor of New South Wales.[5] He arrived in Australia to take up his position in January 1891. According to the Australian Dictionary of Biography there were no major political difficulties during his term. He was described by Sir Henry Parkes as "amiable and well-intentioned", but "very much occupied with his own family". He "did not excel as a public speaker". He was the official host at the 1891 Australasian National Convention in Sydney. Jersey tendered his resignation already in November 1892 citing pressing business affairs. This did not go down well with the Colonial Office in London. Lord Salisbury thought that Jersey had found that there was "less individual power to his office than he imagined". Jersey himself wrote to the Colonial Secretary: "the duties and responsibilities of a governor can hardly be called serious nowadays being chiefly of a social character". He left Australia in March 1893.[1]

Lord Jersey represented the United Kingdom at the 1894 Colonial Conference in Ottawa, Canada. He also acted as New South Wales agent-general in London between 1903 and 1905 and through his ties with the banking institutions helped the state's loan negotiations. He revisited Australia in 1905 and Prime Minister Alfred Deakin considered appointing him Australia's first High Commissioner to London, although nothing came out of this.[1]

One of Lord Jersey's godparents was Queen Victoria. The Queen accepted her role as a token of friendship to Robert Peel, Prime Minister, who was Lord Jersey's grandfather (his mother, the 6th Countess, being Julia Peel).

Lord Jersey was Lord Lieutenant of Oxfordshire from 1877 and from 1885 also served as a Deputy Lieutenant of Warwickshire and as a Justice of the Peace for Warwickshire and Oxfordshire. He was Paymaster-General from 1889-90.[6] In 1894, he was sent to Ottawa to act as the British government's representative to the 1894 Colonial Conference. From 1896 to 1905 he was Chairman of the Light Railway Commission.[2] He was made a Knight Grand Cross of the Order of the Bath in the 1900 Birthday Honours.[1][2][7]

He was a freemason. He was initiated to the craft on 25 October 1865 in the Apollo University Lodge No. 357 at the age of 20. In December 1865 he was passed in the Churchill Lodge No. 478 and in February 1866 he was raised in his mother Lodge. In 1870 he was appointed Senior Grand Warden of the United Grand Lodge of England and served for a year. In 1885 he was appointed Provincial Grand Master of Oxfordshire. When he became Governor of New South Wales, he became a member of the Lodge Ionic No. 65. On 11 June 1891 he was installed Grand Master of the Grand Lodge of New South Wales. [1][8][9] 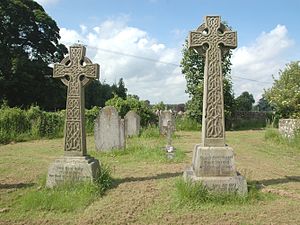 Graves of the 7th (left) and 8th (right) Earls of Jersey in All Saints' parish churchyard, Middleton Stoney, Oxfordshire

Margaret, the Countess of Jersey, was the founding president (1901–14) of the Victoria League and was known as an opponent of women's suffrage. She was also the author of travel articles, children's plays and verse. In 1920 she published A brief history of Osterly Park and in 1922 Fifty-One Years of Victorian Life.[10] In 1903, she laid the foundation stone of Brentford Library,[11] and five years later she formally opened Hove Library.[12]