Victor Andrew de Bier Everleigh McLaglen (10 December 1886 – 7 November 1959) was an English boxer and First World War veteran who became a successful film actor.[1] Towards the end of his life he was naturalised as a U.S. citizen.

McLaglen claimed to have been born in Tunbridge Wells, Kent, though his birth certificate records Stepney in the East End of London as his true birthplace.[2] His father, Andrew Charles Albert McClaglen, later a bishop of the Free Protestant Episcopal Church of England,[3] moved the family to South Africa when McLaglen was a child. He had eight brothers and a sister. Four of his brothers also became actors: Arthur (1888–1972), an actor and sculptor, and Clifford (1892–1978), Cyril (1899–1987) and Kenneth (c. 1901-1979).[4] Other siblings included Frederick (born c. 1882), Sydney (born c. 1884), Lewis (born c. 1889) and a sister, Lily (born c. 1893). Another brother, Leopold McLaglen (1884-1951), who appeared in one film, gained notoriety prior to the First World War as a showman and self-proclaimed World Jujutsu Champion,[5] who authored a book on the subject.[6]

He left home at fourteen to join the British Army with the intention of fighting in the Second Boer War. However, much to his chagrin, he was stationed at Windsor Castle in the Life Guards[7] and was later forced to leave the army when his true age was discovered.

Four years later, he moved to Canada, where he earned a living as a wrestler and heavyweight boxer, with several notable wins in the ring. One of his most famous fights was against Heavyweight Champion Jack Johnson, in a 6 round exhibition bout.[8] This was Johnson's first bout since winning the heavyweight title from Tommy Burns. Between bouts, McLaglen toured with a circus, which offered $25 to anyone who could go three rounds with him. He returned to Britain in 1913 and during the First World War served as a Captain (acting) with the 10th Battalion, Middlesex Regiment, part of the Princess of Wales's Royal Regiment (Queen's and Royal Hampshires). Later he claimed to have served with the Royal Irish Fusiliers. He served for a time as military Assistant Provost Marshal for the city of Baghdad.[9] He also continued boxing, and was named Heavyweight Champion of the British Army in 1918.[8] After the war, he began taking roles in British silent films. 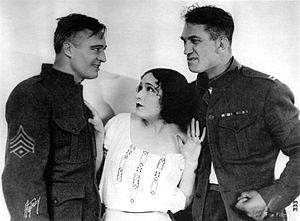 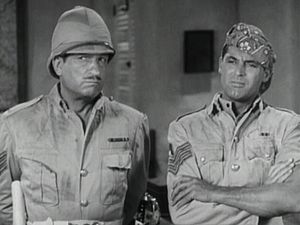 McLaglen's career took a surprise turn in the 1920s, when he moved to Hollywood. He became a popular character actor, with a particular knack for playing drunks. He also usually played Irishmen, leading many film fans to mistakenly assume he was Irish rather than English. McLaglen played one of the titular Unholy Three in Lon Chaney, Sr.'s original silent version of the macabre crime drama. The following year, McLaglen was the top-billed lead in director Raoul Walsh's legendary First World War classic What Price Glory?(1926) with Edmund Lowe and Dolores del Rio, one of the most revered films about the war. (McLaglen and Lowe reprised their roles from the movie in the radio program Captain Flagg and Sergeant Quirt, broadcast on the Blue Network 28 September 1941 – 25 January 1942, and on NBC 13 February 1942 – 3 April 1942.[10]) He made the transition to sound films with ease, memorably starring opposite Boris Karloff's crazed religious fanatic in John Ford's The Lost Patrol (1934), a picture about desperate soldiers gradually losing their minds fighting Arabs in the desert of what is now Iraq. Another highlight of his career was winning an Academy Award for Best Actor for his role in Ford's The Informer (1935), based on a novel by Liam O'Flaherty; Frank Tashlin's 1938 cartoon Have You Got Any Castles? features a caricature of McLaglen emerging from the novel and literally informing someone about some shady characters. Arguably his most famous film apart from What Price Glory? remains Gunga Din (1939) with Cary Grant and Douglas Fairbanks, Jr., an adventure epic loosely based on Rudyard Kipling's poem that served as the template decades later for Indiana Jones and the Temple of Doom (1984). McLaglen was later nominated for another Oscar, this time for an Best Supporting Actor for his role opposite John Wayne in The Quiet Man (1952). He was especially popular with director John Ford, who frequently included McLaglen in his films, earlier as leading man then later as comedy relief for films starring John Wayne. Toward the end of his career, McLaglen made several guest appearances on television, particularly in Western series such as Have Gun, Will Travel and Rawhide. The episodes of those series in which McLaglen guest-starred were both directed by his son, Andrew V. McLaglen, who later became a film director frequently directing John Wayne. 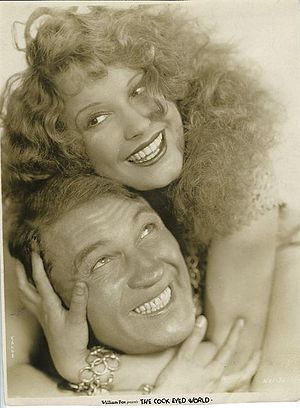 In 1935 McLaglen spent a reported $40,000 to build his own stadium near Riverside Drive and Hyperion Avenue, near Griffith Park and the Atwater Village neighbourhood of Los Angeles. The stadium was used for football and many other activities. The Los Angeles River flood of 1938 seriously damaged the stadium and it fell into disuse thereafter.[11][12]

Victor McLaglen was married three times. His first marriage was to Enid Lamont in 1919. The couple had one daughter, Sheila, and one son, Andrew. Andrew McLaglen was a television and film director who worked on several film projects with John Wayne. Andrew's children, Mary and Josh McLaglen, are both film producers and directors. Sheila's daughter, Gwyneth Horder-Payton, is a television director. Enid Lamont McLaglen died in 1942 as a result of a horse riding accident.

Victor McLaglen married twice more. His second marriage was to Suzanne M. Brueggeman. That marriage lasted from 1943 until 1948. His third and final marriage was to Margaret Pumphrey, whom he married in 1948.[13] He remained married to Margaret, a Seattle socialite, until his death of a heart attack in 1959. He had by that time become a naturalized U.S. citizen. His cremated remains are interred at Forest Lawn Memorial Park in the Garden of Memory, Columbarium of Eternal Light in Glendale, California. [14]