Victoria, also known as Rabat or by its title Città Victoria, is the capital city of Gozo, the second largest island in Malta. The city has a total population of 6,901 (March 2014),[1] and by population is the largest locality in Gozo.

The area around the town, situated on a hill near the centre of the island, has been settled since Neolithic times. Victoria is the name given 10 June 1887 by the British government on the occasion of Queen Victoria's Golden Jubilee, at the request of the Bishop of Malta, Mons. Sir Pietro Pace. However many Gozitans still often refer to it by the name Rabat. It is usually known as Ir-Rabat Għawdex to distinguish it from the town of Rabat on the main island of Malta. 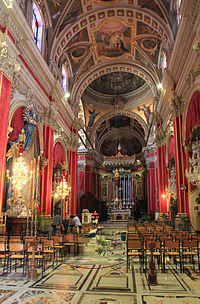 The interior of the Cathedral of Assumption inside the citadel in Victoria. 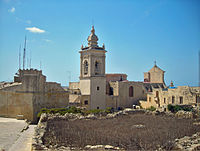 The exterior of the Cathedral of Assumption.
Main article: Cittadella (Gozo)

In the heart of Victoria lies the Cittadella (Citadel), formerly known as il Castello, which has been the centre of activity of the island since possibly Neolithic times, but is known to be first fortified during the Bronze Age c. 1500 BC. It was later developed by the Phoenicians and continued into becoming a complex Acropolis by Roman times.

The north side of the Citadel dates back to the Aragonese domination period. The south flank, overlooking Victoria, was re-constructed under the Knights of St. John, namely between 1599 and 1603, after Ottomans invaded the city in 1551. The massive defensive stone walls of the fortifications rise above the town and were built by the Knights to protect the village communities from foraging corsairs attempting to take slaves and threatened invasion of Moslem forces fighting Christendom.

Within its walls lies a fine 17th century baroque Cathedral designed by Lorenzo Gafà, the Maltese architect who also built the Cathedral of Mdina. It is said that it lies on the site where a Roman temple dedicated to Juno once stood. It is most famous for the remarkable trompe l'oeil painting on its ceiling, which depicts the interior of a dome that was never built.

The current members of the Victoria Local Council are:

Five feasts are celebrated in Victoria, the island of Gozo, the two main feasts are the feast of St. George and the feast of Assumption of the Virgin Mary. The feast dedicated to St. Mary, devoted in its Cathedral situated in the centre of the Citadel dominating the whole island is celebrated on the 15 of August. The other one is dedicated to St. George, the patron saint of Gozo celebrated on the 3rd Sunday of July in St George's Basilica in the heart of Victoria. 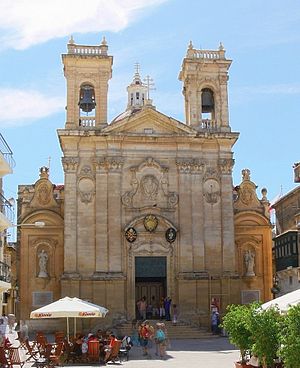 St. George's Basilica, Malta, which covers the whole of Victoria, caters for a little over half of the population of Victoria, as it is a personal parish (as opposed to other parishes who are territorial) operating in the city of Victoria. Its parish church dedicated to St George has the status of a Basilica. This church was built in the 1670s and suffered severe damage in the earthquake of 1693. A new façade was built in 1818. The dome and the aisles are of recent construction (1930s and 1940s). There are several works of art in this church which include the painting of the dome and ceiling by Gian Battista Conti of Rome and other paintings and sculptures by Mattia Preti, Giuseppe d'Arena, Stefano Erardi, Alessio Erardi, Francesco V. Zahra, Giuseppe Calì, and contemporary Alfred Camilleri Cauchi and John L. Grima. 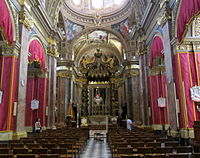 The titular statue of St George was carved from solid wood by Pietro Paolo Azzopardi in 1838 and is the first titular statue on the island. The area over which the church is built is of considerable archaeological interest, with evidence of activity dating back to at least to the Roman period.

The parish celebrates two feasts during the year: 23 April, the official date celebrating the death of the martyr, and the third Sunday of July, when the solemn festivities in honour of Gozo's patron saint are held.

In February 2013 the Basilica opened the doors to its new modern museum, one of a kind in the country. It is the first building built for the purpose of a museum. The Museum and cultural centre, named as Heart of Gozo: Il-Hagar, displays a rich collection of historical and artistic artefacts previously inaccessible to the general public. The museum is found on the left side of the Basilica. 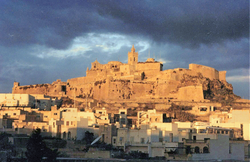 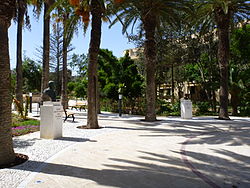 Busts of de Soldanis and Laurent Ropa at Villa Rundle

These gardens are situated between Republic Street and the Main Car Park in Victoria. One can see in these gardens a bronze bust of the Gozitan 18th-century historian and grammarian Can. Giovanni Pietro Francesco Agius de Soldanis and another of Gozo born French poet and writer Laurent Ropa. One can also find a memorial commemorating the invasion of Gozo by Ottomans in 1551. 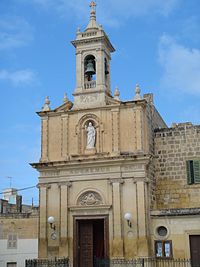 Church of Ta' Savina in Victoria.