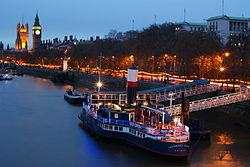 The Westminster end of Victoria Embankment and PS Tattershall Castle, pictured in 2009.

Victoria Embankment is part of the Thames Embankment, a road and river-walk along the north bank of the River Thames in London. It runs from the Palace of Westminster to Blackfriars Bridge in the City of London.

As well as being a major thoroughfare for road traffic between the City of Westminster and the City of London, it is noted for several memorials, such as the Battle of Britain Monument, permanently berthed retired vessels, such as HMS President, and public gardens, including Victoria Embankment Gardens. 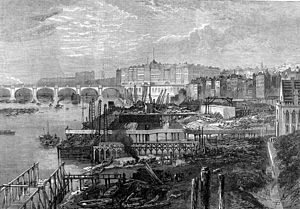 Victoria Embankment under construction in 1865. 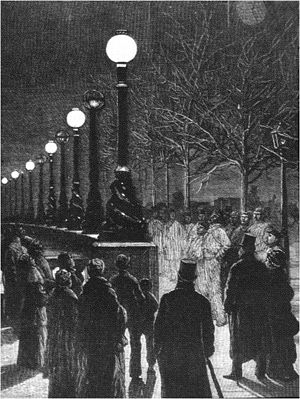 The Victoria Embankment's construction started in 1865 and was completed in 1870 under the direction of Joseph Bazalgette. It was part of a three part work, the other two parts being the Albert Embankment, from the Lambeth end of Westminster Bridge to Vauxhall; and the Chelsea Embankment, extending from Millbank to the Cadogen Pier at Chelsea, close by Battersea Bridge.[1] It was a project of the Metropolitan Board of Works. The contractor for the work was Thomas Brassey.[2] The original impetus was the need to provide London with a modern sewerage system. Another major consideration was the relief of congestion on the Strand and Fleet Street.

The project involved building out on to the foreshore of the River Thames, narrowing the river. The construction work required the purchase and demolition of much expensive riverside property. The cut-and-cover tunnel for the District Railway was built within the Embankment and roofed over to take the roadway.The embankment was faced with granite and penstocks, designed to open at ebb tide to release diluted sewage when rainstorms flooded the system, were built into them as a means of preventing backups in the drainage system and of periodically flushing the mud banks.[3]

At ground level, in addition to the new roads, two public gardens were laid out. One of these backs onto the government buildings of Whitehall, and the other stretches from Hungerford Bridge to Waterloo Bridge. The gardens contain many statues, including a monument to Bazalgette. The section of the gardens between Waterloo Bridge and Charing Cross station also includes a large bandstand, where musical performances are given, and the 1626 watergate of the former York House built for the first Duke of Buckingham.

The Victoria section was the most complex of the three sections. It was much larger, more complex and more significant to the metropolis than the other two and officially opened on 13 July 1870 by the Prince of Wales and Princess Louise.[4] When people refer to "the Embankment" they are usually referring to that portion of it. The total cost of the construction of the Victoria Embankment is estimated to be 1,260,000 GBP and the purchase of property at 450,000 GBP. The total cost includes the cost of materials used in the construction of the embankment.[3]

Construction of the Victoria Embankment proved to be difficult because of the grandness of it. Parliament was assured that three years would be ample time to complete the project, which did not hold to be true. They had an inadequate labour force along with issues of the architect and property appraiser securing all the wharves and other property needed for access and storage in a timely manner. There was also difficulty in acquiring contract requirement to maintain access to steamboat landings at Westminster and Hungerford. in addition, time and money was lost in experimenting with a new type of cofferdam, a structure used to keep water out of the construction site, crucial for building along the tidal Thames.[3]

In December 1878 Victoria Embankment became the first street in Britain to be permanently lit by electricity.[5] The light was provided by 20 Yablochkov candles powered by a Gramme DC generator. 16 March 1879 the system was extended to 40 lamps and 10 October to 55 lamps.[6] Previously the street had been lit by gas, and in June 1884, gas lighting was re-established as electricity was not competitive.[6]

The Victoria Embankment (part of the A3211 road) starts at Westminster Bridge, just north of the Palace of Westminster, then follows the course of the north bank, past Hungerford Bridge and Waterloo Bridge, before ending at Blackfriars Bridge in the City. Shell Mex House, the Savoy Hotel and Savoy Place are located between the Embankment and the Strand. 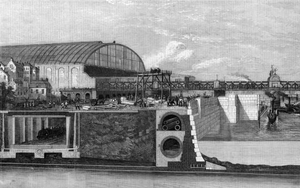 London Underground stations along Victoria Embankment are Westminster, Embankment, Charing Cross, Temple and Blackfriars. The former Aldwych station (closed in 1994) was also located nearby. London Buses route N550 is the only bus route along the Embankment, providing an overnight service when the tube is shut. Victoria Embankment was also the southern end of the Kingsway Tramway Subway. It was also used by trams as a loop right up until the end of the original tramway system in London in 1952.[7]

London's East-West Cycle Superhighway, a kerb-protected cycle track across London, is under construction along most of the Victoria Embankment: it is expected[by whom?] to open in Spring 2016.

Nature and the embankments

The construction of the embankments was about producing an ordered natural: keeping the Thames under control while accentuating its natural beauty at the same time. When the embankment was built, it acted as a fixed, ordered boundary between society, the land, and it regulated the liveliness of the Thames. The embankment was used literally and figuratively to keep society from nature, enclosed and tamed by embankment walls. When schemes of redesigning the city were created in the seventeenth century, involving the disciplining the Thames because incorporated and necessary in controlling nature.[8]

The Victoria Embankment housed part of the Metropolitan District Railway and part of the Low Level Sewer. The reasons for these boundaries on the Thames can be traced to accounts of the river being depicted as cleansed, protected and improved; a modern river. Embanking represented the assertion of the rights of the rational and cleansed social over the irrational and disordered natural, or a disciplining of the natural, incorporating the Thames into the city as an object of this control. The embankments were, most importantly, designed to be solid, a physical and firm divide between culture and nature, and a rigid enclosure of the water.[3]

Developing as the imperial city

The embankments were designed as a contribution to "the appropriate, and appropriately civilized, cityscape for a prosperous commercial society." John Thwaites, the chair of the Metropolitan Board of Words, made note that the embankments were an important step in making London recognised as an exemplary imperial city, and that the embankments were the greatest public work to be taken in London. This imperial power was represented in the embankments' grandeur and could be seen in the way they controlled nature, linking the local experience of nature in London to the global rivalries of imperial powers. On the river side, new steamboat piers and landing stairs were designed for river access. Above ground were tree lined roadway and pedestrian walkways, surfaced with York paving stone and decorative gaslight posts for the top of the wall.[3]

It is nearly impossible to make additional improvements along the Thames in London today, since the Victoria Embankment has since been extended below Blackfriars Bridge and the former docks and warehouses on either side of the river are now quickly being reconstituted as high rent offices blocks and flats.[3]