From Infogalactic: the planetary knowledge core
Jump to: navigation, search
Not to be confused with V-E Day. For other uses, see Victory Day.

Victory Day was a federal holiday in the United States from 1948 until 1975. As of 2016, the holiday is observed in the U.S. state of Rhode Island with state offices closed on the second Monday of August. The U.S. Space & Rocket Center also commemorates the holiday with discounted ticket prices also on the second Monday in August.[1] Originally, the official name was "Victory over Japan Day" and "V-J Day", as proclaimed by then President Harry S. Truman and was officially observed on September 2 nationwide. At some point, the name was changed to "Victory Day" in light of the modern post-war Japan emerging in economic importance. Further name changes were attempted later, but were unsuccessful, at which point, the name "Victory Day" remained the official name.

The holiday celebrates the conclusion of World War II and is related to Victory over Japan Day in the United Kingdom. It was a nationally recognized holiday from 1948 to 1975, but it has since been removed due to its reference to Japan in light of the current and good relations. Rhode Island retains the holiday in tribute to the disproportionate number of sailors it sent and lost in the Pacific front.[2] In 2015, the Space and Rocket Center in Huntsville, Alabama honored 500 veterans on the 70th anniversary of the end of the war[3] 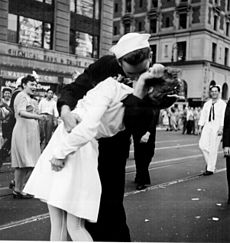 Victory Day has commemorated the anniversary of Japan’s surrender to the Allies in 1945 which ended World War II. The atomic bombs dropped on Hiroshima on August 6 and Nagasaki on August 9, and the Soviet Union’s invasion of Manchuria in the previous week led to the eventual surrender. President Truman's announcement of the surrender started mass celebrations across the United States, which was when he declared September 2 as the official "VJ Day" in 1945. In 1975, the holiday was abolished at the federal level leaving Rhode Island as the only state in the U.S. where the holiday is a legal holiday. Rhode Island has observed this day since 1948.

According to the Providence Journal, the reasons for the federal holiday being scrapped include Japan's "increasing economic might".[4] Even Rhode Island had debates over whether to retain the state holiday, with the Rhode Island Japan Society being the force for removal of the holiday.[4] The case was between the Japanese Americans and the U.S. veterans who fought in this particular war.[4]

In 1975, the U.S. state of Arkansas was the last state (other than Rhode Island) to drop the holiday.[4] 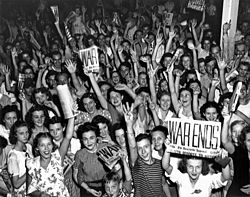