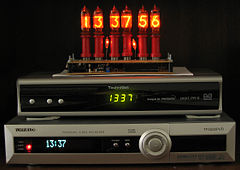 Some displays can show only digits or alphanumeric characters. They are called segment displays, because they are composed of several segments that switch on and off to give appearance of desired glyph. The segments are usually single LEDs or liquid crystals. They are mostly used in digital watches and pocket calculators. There are several types:

2-dimensional displays that cover a full area (usually a rectangle) are also called video displays, since it is the main modality of presenting video.

Full-area 2-dimensional displays are used in, for example:

The multiplexed display technique is used to drive most display devices.