Vienne is a commune in southeastern France, located 32 kilometres (20 mi) south of Lyon, on the river Rhône. It is the fourth largest city after Grenoble in the Isère department, of which it is a subprefecture.

Before the arrival of the Roman armies, Vienne was the capital city of the Allobroges, a Gallic people. Transformed into a Roman colony in 47 BCE under Julius Caesar, Vienne became a major urban center, ideally located along the Rhône, then a major axis of communication. The town later became a Roman provincial capital. Numerous remains of Roman constructions are still visible in modern Vienne. The town was also an important early bishopric in Christian Gaul. Its most famous bishop was Avitus of Vienne. At the Council of Vienne, convened there in October 1311, Pope Clement V abolished the order of the Knights Templar. During the Middle Ages, Vienne was part of the kingdom of Provence, dependent on the Holy Roman Empire, while the opposite bank of the Rhône was French territory, thus making it a strategic position.

Today, the town is a regional commercial and industrial center specializing in the food industry. Tourism is also a major part of the town's economy. Indeed, there are many important historical monuments that draw the crowds, but the annual Jazz à Vienne[1] festival in July also makes it a popular tourist destination.

For the ecclesiastical history, see Archbishopric of Vienne. 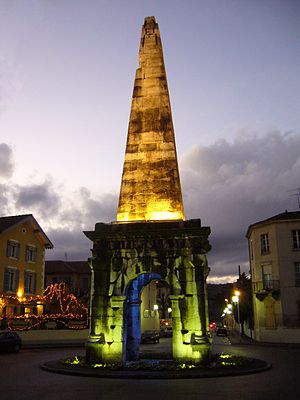 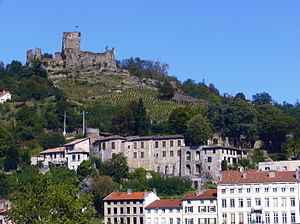 The ruins of Vienne's Medieval castle 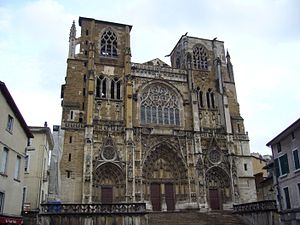 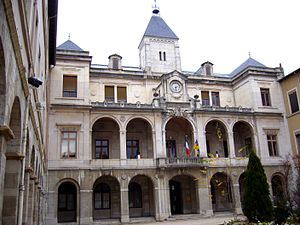 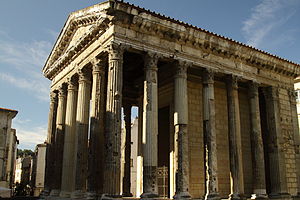 The oppidum of the Allobroges became a Roman colony about 47 BCE under Julius Caesar, but the Allobroges managed to expel them; the exiles then founded the colony of Lugdunum (today's Lyon). Herod Archelaus was exiled here in 6 CE. During the early Empire, Vienna (as the Romans called it—not to be confused with today's Vienna) regained all its former privileges as a Roman colony. In 257 Postumus was proclaimed emperor here of a short-lived Gallo-Roman empire with its capital at Trier. Later it became a provincial capital of the Dioecesis Viennensis.

On the bank of the Gère are traces of the ramparts of the old Roman city, and on Mont Pipet (east of the town) are the remains of a Roman theatre, while the ruined thirteenth-century castle there was built on Roman footings. Several ancient aqueducts and traces of Roman roads can still be seen.

There are two important Roman monuments still standing at Vienne. One is the Early Imperial temple of Augustus and Livia, a rectangular peripteral building of the Corinthian order, erected by the emperor Claudius, which owes its survival, like the Maison Carrée at Nîmes, to being converted to a church soon after the Theodosian decrees and later rededicated as "Notre Dame de Vie." (During the Revolutionary Reign of Terror it was used for the local Festival of Reason.) The Roman monument is the Plan de l'Aiguille, a truncated pyramid resting on a portico with four arches, from the Roman circus. Many popular theories have been advanced as to the original intent of this structure; there is even a legend of Pontius Pilate making it his tomb.

The provincial capital was an important early seat of a bishop and the legendary first bishop said to have been Crescens, a disciple of Paul. There were Christians here in 177 when the churches of Vienne and Lyon addressed a letter to those of Asia and Phrygia and mention is made of the deacon of Vienne (Eusebius of Caesarea, Church History). The first historical bishop was Verus, who was present at the Council of Arles in 314. About 450 of Vienne's bishops became archbishops. Vienne's archbishops and those of Lyon disputed the title of "Primate of All the Gauls" based on the dates of founding of the cities compared to the dates of founding of the bishoprics. Vienne's archbishopric was de facto dissolved in 1790 during the revolution and officially terminated 11 years later by the Concordat of 1801.

Vienne was a target during the Migration Period: it was taken by the Kingdom of the Burgundians in 438, but re-taken by the Romans and held for 35 years. Roman rule ended permanently in 534 when the Merovingian-led Franks captured Vienne. It was then sacked by the Lombards in 558, and later by the Moors in 737. When Francia's king divided Frankish Burgundia into three parts in 843 by the Treaty of Verdun, Vienne became part of Middle Francia.

In the Kingdom of Provence

King Charles II the Bald assigned the district in 869 to Comte Boso of Provence, who in 879 proclaimed himself king of Provence and on his death in 887 was buried in the cathedral church of St. Maurice. Vienne then continued as capital of the Dauphiné Vienne of the Kingdom of Provence, from 882 of the Kingdom of West Francia and from 933 of the Kingdom of Arles until in 1032, when it reverted to the Holy Roman Empire, but the real rulers were the archbishops of Vienne. Their rights were repeatedly recognized, but they had serious local rivals in the counts of Albon, and later Dauphins of the neighboring countship of the Viennois. In 1349, the reigning Dauphin sold his rights to the Dauphiné of France, but the archbishop stood firm and Vienne was not included in this sale. The archbishops finally surrendered their territorial powers to France in 1449. Gui de Bourgogne, who was archbishop 1090–1119, was pope from 1119 to 1124 as Callixtus II.

There are two outstanding Roman remains: the temple of Augustus and Livia; and the Plan de l'Aiguille or La Pyramide, a truncated pyramid resting on a portico with four arches, which was associated with the city's Roman circus.

The early Romanesque church of Saint Peter belonged to an ancient Benedictine abbey and was rebuilt in the ninth century, with tall square piers and two ranges of windows in the tall aisles and a notable porch. It is one of France's oldest Christian buildings dating from the 5th century laid-out in the form of a basilica and having a large and well constructed nave. It also boasts a beautiful Romanesque tower and a magnificently sculptured South portal containing a splendid statue of Saint Peter. Today, the building houses a lapidary museum that holds a Junon head and the beautiful statue of Tutela, the city's protective divinity.

The Gothic former cathedral of St Maurice was built between 1052 and 1533. It is a basilica, with three aisles, but no apse or transepts. It is 315 feet (96 m) in length, 118 feet (36 m) wide and 89 feet (27 m) in height. The most striking portion is the west front, which rises majestically from a terrace overhanging the Rhône. Its sculptural decoration was badly damaged by the Protestants in 1562 during the Wars of Religion.

The Romanesque church of St André en Bas was the church of a second Benedictine monastery, and became the chapel of the earlier kings of Provence. It was rebuilt in 1152, in the later Romanesque style.