From Infogalactic: the planetary knowledge core
Jump to: navigation, search
Not to be confused with vigilant.
For other uses, see Vigilante (disambiguation).
File:Baldknobbersrr.jpg
The Bald Knobbers, an 1880s vigilante group from Missouri, wearing crude "blackface" masks typical of the post-Reconstruction era in the United States – as portrayed in the 1919 film, The Shepherd of the Hills.

A vigilante (/ˌvɪdʒɪˈlænti/, /ˌvɪdʒɪˈlænteɪ/; Spanish: [bixiˈlante]; Portuguese: [viʒiˈlɐ̃t(ɨ)], [viʒiˈlɐ̃tʃi]) is a civilian or organization acting in a law enforcement capacity (or in the pursuit of self-perceived justice) without legal authority.

"Vigilante justice" is often rationalized by the idea that adequate legal mechanisms for criminal punishment are either nonexistent, insufficient, or inefficient. Vigilantes typically see the government as ineffective in enforcing the law; such individuals often claim to justify their actions as a fulfillment of the wishes of the community.

Persons alleged to be escaping the law or above the law are sometimes the victims of vigilantism.[1]

In a number of cases, vigilantism has involved targets with mistaken identities.

Vigilantism and the vigilante ethos existed long before the word vigilante was introduced into the English language. There are conceptual and psychological parallels between the Dark Age and medieval aristocratic custom of private war or vendetta and the modern vigilante philosophy.

Elements of the concept of vigilantism can be found in the Biblical account in Genesis 34 of the abduction and rape (or, by some interpretations, seduction) of Dinah, the daughter of Jacob, in the Canaanite city of Shechem by the eponymous son of the ruler, and the violent reaction of her brothers Simeon and Levi, who slew all of the males of the city in revenge, rescued their sister and plundered Shechem. When Jacob protested that their actions might bring trouble upon him and his family, the brothers replied "Should he [i.e., Shechem] treat our sister as a harlot?"

Similarly, in 2 Samuel 13, Absalom kills Amnon after King David, their father, fails to punish Amnon for raping Tamar, their sister.

Recourse to personal vengeance and dueling was considered a class privilege of the sword-bearing aristocracy before the formation of the modern centralized liberal-bureaucratic nation-state (see Marc Bloch, trans. L. A. Manyon, Feudal Society, Vol. I, 1965, p. 127). In addition, sociologists[who?] have posited a complex legal and ethical interrelationship between vigilante acts and rebellion and tyrannicide.

In the Western literary and cultural tradition, characteristics of vigilantism have often been vested in folkloric heroes and legendary outlaws (e.g., Robin Hood[6]). Vigilantism in literature, folklore and legend is connected to the fundamental issues of dissatisfied morality, injustice, the failures of authority and the ethical adequacy of legitimate governance. Hollywood (Cinema of the United States) has explored and exploited the vigilante theme extensively in movies such as the 1974 action film Death Wish (film) and its several sequels.

During medieval times, punishment of felons was sometimes exercised by such secret societies as the courts of the Vehm[7] (cf. the medieval Sardinian Gamurra later become Barracelli, the Sicilian Vendicatori and the Beati Paoli), a type of early vigilante organization, which became extremely powerful in Westphalian Germany during the 15th century.

As boom-towns, or mining towns in California because of Gold Rush, started appearing towards the 1850s, vigilantes started putting justice in their hands because no forms of government were established in these towns. These people would assault accused thieves, rapists and murderers. When they assaulted these thieves, they would take all their gold and give it to the accuser. Other than reports and newspapers, there are not many records of vigilantes. Few names or groups are known. 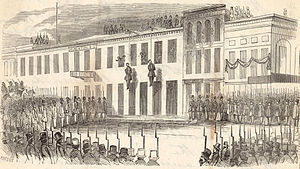 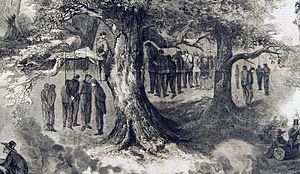 Later in the United States, vigilante groups arose in poorly governed frontier areas where criminals preyed upon the citizenry with impunity.[8]