From Infogalactic: the planetary knowledge core
Jump to: navigation, search
For other uses, see Trelleborg (disambiguation). 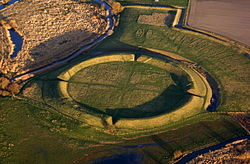 A Viking ring fortress is a type of circular fort of a special design, built by the Vikings in the Viking Age. They are also known as Trelleborgs. All Trelleborgs have a strictly circular shape, with roads and gates pointing in the four cardinal directions. These common structures are sometimes partially encircled by advanced ramparts, but these additions are not always circular.

There are a total of seven known Viking ring fortresses at present, located in Denmark and Scania, in the southern part of modern Sweden. Most of the seven Trelleborgs have been dated to the reign of the Harold Bluetooth of Denmark (died 986). The fort in Borgeby[1][citation needed] has been dated to around 1000 AD, so it is possible that it too, was built by the same king.

Denmark and Sweden are currently applying for admission of the Viking ring fortresses as UNESCO World Heritage sites.[2]

This specific type of fortification was named after the first discovered example: Trelleborg near Slagelse, excavated in the years 1936-1941. Traditionally, the name Trelleborg has been translated and explained as ″a fortress built by slaves″, since the Old Norse word for slave was thrall (The modern Danish word is træl) and borg means fortress or city. But the word trel (pl. trelle) is also a plausible explanation and relates to the wooden staves, covering both sides of the protective circular walls.[3] 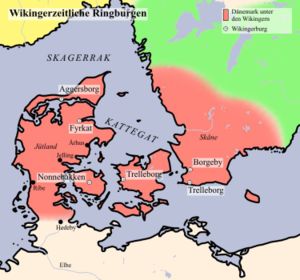 Sites of six of the Viking ringcastles.

The existence of a Viking ring fortress at Helsingborg in modern Sweden, was suggested in 2009 after archaeological excavations since 1987. The Helsingborg ring fort might have been the largest of them all, at a diameter of 270 m.[9]

Comparison of the seven fortifications

The ring castles and the contemporary bridge over Ravning Enge/Vejle Å (Vejle river) – together with minor bridges erected on Zealand (Bakkendrop bridge between Gørlev Tissø and Risby bridge by Præstø) and Lolland (over Flintinge river) – differ clearly from others from the Viking Age. Unlike other ring castles from the period the ring castles which follow the Trelleborg model are constructed after a strictly geometrical plan and measured with the Roman foot. The pointed bottoms of the moats is another element borrowed from the Ancient Romans. 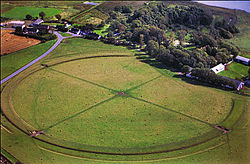 Aerial view of the Viking ring fortress of Aggersborg. The similarity in design with Trelleborg near Slagelse, is clearly evident.

All five fortresses had similar designs, "perfectly circular with gates opening to the four corners of the earth, and a courtyard divided into four areas which held large houses set in a square pattern."[10]

In spite of searches no real parallels have been found in the rest of Europe. On the coasts of the Netherlands and Belgium there are ring castles with certain points of resemblance and on the island Walcheren there are the remnants of a castle with gateways in the four points of the compass, combined with streets. Similar forts can be found in England.[11] These generally date though from around the time of the Roman conquest of Celtic Britain and had been lying in ruins for hundreds of years prior to the building of the Viking ring forts.

Datings by dendrochronology have found the wood used for the construction of Trelleborg (near Slagelse) to have been felled in the autumn of 980 and thus being used for building presumedly in the spring of 981. The rather short construction time and the complete lack of any signs of maintenance indicate an only short use of the buildings, maybe five years but hardly more than twenty. The others have been dated to roughly the same time. Fyrkat may be a little older, Aggersborg somewhat younger. Not enough has been found at the other sites for a precise dating but the construction and layout of the Trelleborg at Slagelse, Fyrkat, Aggersborg, Nonnebakken under Odense and the fort under modern Trelleborg in Sweden is so similar that it is believed most probable that they were conceived by a single mind.

Around 974 the Danish Viking king Harald Bluetooth lost control of the Danevirke and parts of Southern Jutland to the Germans. The entire complex of fortifications, bridges and roads which were built around 980 are presumed by some to be Harald's work, and part of a larger defensive system.

Another theory is that the ring castles were boot camps for the troops used by Sweyn Forkbeard in his attack on England. Sweyn and his men sacked London in 1013.

Fortifications of a similar design and date, has been found around some old towns, like in Aarhus for example, but without the perfect circular geometry.[12]

In 1990, Danish hobby pilot Preben Hansson observed that the Trelleborgs at Aggersborg, Fyrkat, and Slagelse, and a ringwall at Eskeholm (Samsø, Lua error in Module:Coordinates at line 668: callParserFunction: function "#coordinates" was not found.), appear to be aligned, a kind of Ley line.[13] The theory that the fortresses were planned by prehistoric aviators has been popularized by Erich von Däniken.[14][15]