Viktor Lutze (December 28, 1890 – May 2, 1943) was the commander of the Sturmabteilung  ("SA") succeeding Ernst Röhm as Stabschef. He died from injuries received in an automobile accident. Lutze was given an elaborate state funeral in Berlin on May 7, 1943.

Lutze was born in Bevergern, Westphalia, the son of a peasant craftsman. After a short career in the post office, he joined the German Army in 1912, serving with the 55th Infantry Regiment. He fought in the 369th Infantry Regiment and 15th Reserve Infantry Regiment during World War I. He became a company commander and was heavily wounded four times, including the loss of his left eye. After the war, Lutze became a merchant and joined the police force.

Lutze joined the National Socialist German Workers Party (NSDAP; Nazi Party) in 1922, and the Prussian State Council. He became an associate of Franz Pfeffer von Salomon, the first leader of the SA. Together, they determined the structure of the organization.

He also worked with Albert Leo Schlageter in the resistance/sabotage of the Belgian and French occupation of the Ruhr in 1923. His organization of the Ruhr for the SA became a model for other regions after 1926. In October 1931, he organized a huge joint rally in Braunschweig (Brunswick) of SA and SS men to show both strength in strife-weary Germany and loyalty to their leader, Adolf Hitler. This was before Hitler came to national power as Chancellor of Germany in January, 1933.[1] Over 100,000 men attended the rally hosted by SA-Gruppe Nord under the leadership of Lutze. At the rally, the SA assured Hitler of their loyalty and Hitler in turn increased the size of the SA with the creation of 24 new Standarten (regiment-sized formations). Hitler never forgot this show of loyalty by Lutze. A badge was made to commemorate the event.[2] Lutze rose through the ranks and by 1933 was a SA-Obergruppenführer. In March 1933, he was appointed police president of Hanover and later its provincial governor and state counselor.[3]

Lutze's participation in the Night of the Long Knives in 1934 was very important: he informed Hitler about Ernst Röhm's anti-régime activities. (Hitler at first said, "We'll have to let the thing ripen"). In preparation for the purge, both Heinrich Himmler and his deputy Reinhard Heydrich, chief of the SS Security Service (SD), assembled dossiers of manufactured evidence to suggest that Röhm planned to overthrow Hitler. Meanwhile, Göring, Himmler, Heydrich and Lutze (at Hitler's direction) drew up lists of those who should be liquidated, starting with seven top SA officials and including many more. At least 85 people died during the purge, although the final death-toll may have been in the hundreds. After the purge Lutze succeeded Röhm as Stabschef SA, but after the Night of the Long Knives, the SA no longer had as prominent a role as it had had in the early days of the party.[3] Lutze's major tasks included overseeing a large reduction in the SA, a task welcomed by the SS and by the regular armed forces. On June 30, 1934 Hitler issued a twelve-point directive to Lutze to clean up the SA and wrote that "SA men should be leaders, not ludicrous apes". 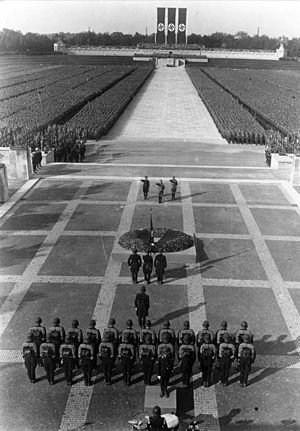 At the Nazi Party Congress in Nuremberg in September 1934, William L. Shirer observed Hitler speaking to the SA for the first time since the purge (Hitler absolved the SA from crimes committed by Röhm). Shirer also noted Lutze speaking there (Lutze reaffirmed the SA's loyalty). Shirer described Lutze as possessing a shrill unpleasant voice, and thought the "SA boys received him coolly". Leni Riefenstahl's film Triumph of the Will, however, shows the SA mobbing Lutze as he departs at the end of his evening rally speech. His automobile can barely make it through the crowd. Alone among the speakers (apart from Hitler) Lutze receives the dramatic low-angle shots while standing solo at the podium. Only Hitler, Himmler, and Lutze are shown in the march to the World War I cenotaph, where they lay a wreath. The makers of the film give the then little-known Lutze some of the prestige of a party leader, so as to draw attention away from their recent leader, Ernst Röhm. The latter appeared often by the side of Hitler in the previous Riefenstahl film of the 1933 party congress Der Sieg des Glaubens, but that film was withdrawn from circulation and all prints known to the Nazi officials were eradicated after his murder; the film is known today from a copy found in Britain in the 1990s.

After the Anschluss, Lutze traveled to Austria to help reorganize the SA there.

In September 1938, SA Stabschef Lutze traveled to Passau to welcome Nazis who had returned from the Reichsparteitag in Nuremberg. Lutze stayed at "Veste Oberhaus" and seized the opportunity to meet Johann Nepomuk Kühberger, who had once helped to save Hitler from drowning in the Inn river. Now, he was a priest, and played the organ at Passau cathedral.[4]

The most visible role for the SA after the purge was in assisting the SS in Kristallnacht in November 1938. In February 1939, Lutze reviewed a parade of 20,000 Blackshirts in Rome and then set off for a tour of Italy’s Libyan frontier with Tunisia.

Lutze maintained his position in the weakened SA until his death. On May 1, 1943 he was driving a car near Potsdam with his entire family (one account suggests they were foraging for food).[citation needed] Driving too fast on a curve caused an accident that badly injured Lutze as well as killing his oldest daughter Inge and greatly injuring his younger daughter. Viktor Lutze died during an operation in a hospital in Potsdam at 10:30 the next evening. (News reports stated that the accident involved another vehicle, keeping the news of reckless driving from the public. This may have contributed to theories that Lutze has been murdered.[citation needed] Hitler ordered Joseph Goebbels to convey his condolences to Viktor's wife Paula and son Viktor, Jr. Goebbels, in his diaries, had already described Lutze as a man of "unlimited stupidity" but at his death decided he was a decent fellow. Lutze was 52 years old.

The esteem in which Lutze was held is indicated by the fact that Hitler ordered a lavish state funeral for him on May 7, 1943 in the Reich Chancellery. Hitler attended in person, something he rarely did at that stage in the war, and posthumously awarded Lutze the Highest Grade of the German Order. Hitler also took this opportunity to order party, army, and government officials (many of whom attended) to curtail speeding (specifically requesting they drive no faster than 80 kilometres (50 mi) per hour).[citation needed]

Hitler appointed Wilhelm Schepmann to succeed Lutze as Stabschef SA, but the organization had been thoroughly marginalized by that time.

Pictures found in Lutze's house by the Allies depict a family man who enjoyed day-trips and table tennis.[5]

Lutze was posthumously awarded the Highest Grade of the German Order.