The Vilaine in Bruz

The Vilaine (Breton: Gwilen) is a river in Brittany, in the west of France. The river's source is in the Mayenne département (53), and flows out in the Atlantic Ocean at Pénestin in the Morbihan département (56). It is 218 km long. The river is joined to the Ille and the Rance by means of the Canal d'Ille-et-Rance by the commune of Rennes.

Course of the river

Three barrages were built around Vitré, Ille-et-Vilaine to avoid floods, the drinkable water and leisure spaces:

The Vilaine is part of Brittany's canal system. The section from Rennes to the Atlantic Ocean is navigable for smaller craft. In Rennes the river connects to the Canal d'Ille et Rance, in Redon it crosses the Canal de Nantes à Brest. (Source: NoorderSoft Waterways Database) 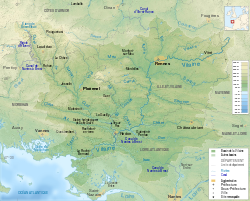