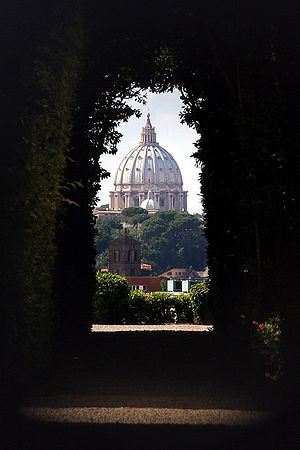 Saint Peter's Basilica through the keyhole at the Villa Malta. 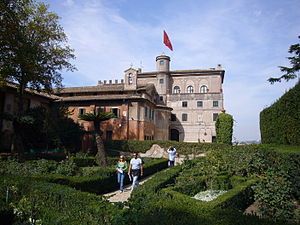 The site, on a rise directly overlooking the Tiber and access to the Roman Pons Sublicius, was already a fortified Benedictine monastery in the tenth century. The monastery passed to the Templars and after the destruction of their order, to the Knights Hospitallers, predecessors of the present Order of Malta. Radical rebuilding was undertaken in the 15th through 17th centuries. The villa was granted extraterritoriality in 1869 by Italy.[3] On the piano nobile is an assemblage of portraits of the Grand Masters of the Order.

The site is reached by via Santa Sabina, which ends in the small, picturesque piazza dei Cavallieri di Malta enclosed on two sides by the cypresses of the garden of the Benedictines backing the fantasy screen of obelisks and stele constructed in 1765 to designs by Giovanni Battista Piranesi, one of the very few executed designs by this etcher of Roman views who prided himself on being an architect.[4] Ahead rises the Neo-Romanesque campanile of the Church of San Anselmo (1893-1900) attached to the international Benedictine seminary (Seminario Internazionale Benedittino). On the third, right-hand side is the monumental entrance screen, also designed by Piranesi under commission from Cardinal Carlo Rezzonico, nephew of Pope Clement XIII. The Villa is arguably best known for a small hole in the arch-headed central portone, through which the copper-green dome of Saint Peter's Basilica, the center of Roman Catholicism, can be viewed at the end of a garden allée framed in clipped cypresses (illustration).[5] 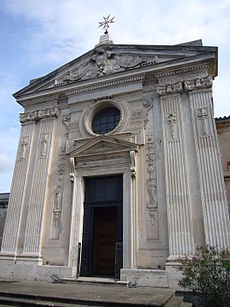 The parterre garden links the villa with the Order's Church of Santa Maria del Priorato, an ancient church completely redesigned by Piranesi in 1765, affording perhaps the earliest example in Rome of Neoclassical architecture.[6] Its facade is capped with a low pediment; paired pilasters on either side of the door have fanciful capitals each formed of a tower flanked by seated sphinxes; other elements of the classical vocabulary are also combined in fanciful and personal ways.