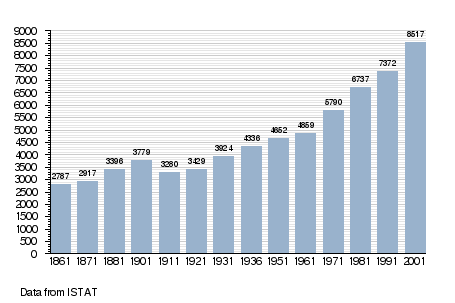 Thanks to its geographical position, to excellent motorway junctions, Villafranca is the ideal place where you can spend your holidays in contact with the nature. In fact it offers a wide artistic and architectonic wealth and the possibility to effect trekking routes on the Peloritani or trips towards other towns of Eastern Sicily: Taormina, Catania, Etna, Siracusa, Eolie Isles, Messina, Tindari and Nebrodi Park. The local territory of Villafranca includes the old feuds of Bauso and Calvaruso. As regards Bauso, some texts affirm that Briosa was the old name of Villafranca during the Norman period and then it was called Bauso or Bavuso.

The first documented records go back to 1271 when the King Charles D'Angiò gave to Pierre Gruyer the feud of Bauso, previously belonged to Enrico Dissinto. During the Aragonese period, the history of Bauso and Calvaruso Joins together and these feuds such as Saint'Andrea, Rocca, Maurojanni and Rapano. Then Bauso and Calvaruso were given by Federico III D'Aragona to Perrone Gioeni together with other feuds. In 1590 under Stefano Cottone's rule a baronial palace was built that still overlooks the centre of Villafranca. Another important figure was Pasquale Bruno who, with his heroic exploits, defended the weak and oppressed and died on scaffold in 1801. The French writer Alexandre Dumas take inspiration from his life for the novel “Pascal Bruno”. Besides the legends, an interesting example of the local folklore is given from the traditional “Bamparizzu”. It is a particular ceremony that is held on 5 December, the day before the solemn procession of Saint Nicholas, patron of Villafranca. ln this occasion some timbers and faggots are piled in the middle of square. After the Mass, the priest goes out of the church with a little procession of children that bring some torches used to light the fire. Great devoutness also attracts the Christ “Ecce Homo” of Calvaruso, place of pilgrimage on Easter Monday.

The geological aspects of the territory are very interesting so the local government with the co-operation of the Earth Science Department of the University of Messina and of "Sikelia" firm has developed a study on the “Geositi” that are on the territory and considered as natural monument. Particularly interesting are those rocks called evaporated (gypsum and evaporated limestone) that testify one of the most extraordinary events of the geological history of our planet: the crisis of salinity that struck the Mediterranean sea millions of years ago. The gypsum is formed by great crystals with particular silver glares (variety known as selenite). Another type of rocks are those formed by evaporated limestones. White and pink rocks used in times past as building stone (the so-called “Bauso stone”). The “geositi” of Villafranca culminate near Serro with a wide amphitheatre where surface clayey - sandy soils. Villafranca Tirrena also offers the possibility of itineraries on foot, on horseback or by mountain bike inside the territory or towards the Peloritani Mountains.