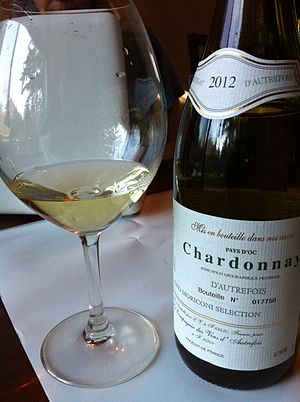 Vin de pays is a French term meaning "country wine". Vins de pays are a step in the French wine classification that is above the table wine (Vin de table) classification, but below Appellation d'origine contrôlée (AOC) and formerly below VDQS classifications. Legislation on the Vin de pays terminology was created in 1973 and passed in 1979,[1] allowing producers to distinguish wines that were made using grape varieties or procedures other than those required by the AOC rules, without having to use the simple and commercially non-viable table wine classification. Unlike table wines, which are only indicated as being from France, Vin de pays carries a geographic designation of origin, the producers have to submit the wine for analysis and tasting, and the wines have to be made from certain varieties or blends. Regulations regarding varieties and labelling practices are typically more lenient than the regulations for AOC wines. In 2009, the Vin de pays classification was replaced by the new IGP - Indication Géographique Protégée, or Protected Geographical Region - designation.[2]

There are three tiers of Vin de Pays: regional, departmental and local.[1]

Each regional Vin de Pays is divided into several departmental Vins de Pays, of which there are about 50.[1] The names are derived from the French departments in question and the limits exactly the same as the department's borders. For example, Vin de Pays du Gard is one of the Vins de Pays produced within Vins de Pays d'Oc using grapes from the Gard department and the Vin de Pays de Charente-maritime is produced in the Cognac area. Approximately one third of the French departments don't produce Vin de Pays, for example Côte d'Or in Burgundy and Gironde in Bordeaux, or because the climate is not suited to produce wine at all, like the Bretagne, Normandy and Nord-Pas de Calais regions.

The local, or zone-defined Vins de pays are numerous, and may take their name from some historical or geographical phenomenon, such as Vin de Pays des Marches de Bretagne or Vin de Pays des Coteaux de l'Ardeche, or even a more locally specific variant.[1] The boundaries of a zone may reflect a consistent terroir, rather than an administrative convenience, and could potentially in the long run achieve the status of an AOC.[5]

The conditions to respect to be allowed to use the classification Vin de pays are the following:

Originally, Vin de Pays designation was commonly viewed as inferior to an AOC Appellation, often being ascribed to thin and simple wines. However, since the late 1980s, an increase in demand for varietal wines has led some French producers and cooperatives to produce more Vin de Pays, especially Vin de Pays d'Oc, to make varietal wines with some form of designation, while turning away from the highly restrictive AOC classification which often requires very specific blends of grape varieties.

This can be seen as a response to the increasing sales success of varietal New World wines from Australia, New Zealand, the United States, South Africa and Chile. As well as varietal wines (such as Cabernet Sauvignon or Merlot), Vin de Pays is being used to produce non-traditional blends which do not meet the requirements of AOC or VDQS regulations. Some of these wines are considered much better, and command higher prices, than AOC or VDQS wines from the same region, or even the same winemakers.