He was last seen alive inside the White House, and all surveillance recordings which would have shown him leaving the grounds have vanished. His death was nevertheless ruled a suicide by multiple official investigations, a finding questioned by non-governmental investigators asserting a cover-up[1][2][3] as well as US Attorney Miguel Rodríguez (attorney), who resigned from the Starr investigation alleging a widespread cover-up.[4]

Foster was born in Hope, Arkansas, to Alice Mae and Vincent W. Foster.[5] His father was in real estate sales and development and was prosperous,[6][7] and he had two sisters, Sheila and Sharon.[5] He was a childhood neighbor and friend of Bill Clinton for the first eight years of his life, until Clinton moved away. As the future president later recalled, "I lived with my grandparents in a modest little house across from Vince Foster's nice, big, white brick house."[8]

Foster attended Davidson College, graduating with a bachelor's degree in psychology in 1967.[7][9] His father wanted him to go into the family real estate business, but he chose law instead.[6]

After starting at Vanderbilt University Law School, he joined the Arkansas National Guard during the height of the Vietnam War[6] in order to avoid the military draft.[7] In order to be closer to his guard responsibilities, he transferred to the University of Arkansas School of Law,[6] where he was managing editor of the law review[5] and received his Juris Doctor (J.D.) in 1971, graduating first in his class.[6] Additionally he scored the highest in his class on the Arkansas bar exam.[6]

Foster met Elizabeth (Lisa) Braden during his sophomore year at Davidson; she was the daughter of an insurance broker from Nashville and was attending Sweet Briar College.[6] They married on April 20, 1968,[11] at St. Henry Catholic Church in Nashville.[6] They had three children, Vince III, Laura, and John (called "Brugh").[6] 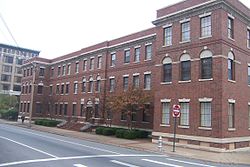 In 1971, Foster joined Rose Law Firm in Little Rock, Arkansas,[12] and in 1974 was made partner,[5] one of only nine in the firm at the time.[13] He was the head of the Arkansas Bar association committee that oversaw legal aid, and as such worked with legal aid clinic worker Hillary Rodham in successfully overcoming an unreasonable measuring requirement for indigent clients.[12] Foster then initiated the hiring of Rodham at Rose Law Firm, where she became its first ever female associate[12] (and later partner); Foster and fellow partner Webster Hubbell were instrumental in overcoming the reluctance of other partners to hire a woman.[13] Foster and Rodham worked together on a number of cases.[9]

Foster practiced mostly corporate law,[14] eventually earning nearly $300,000 a year.[14] He developed a reputation as one of the best trial litigators in Arkansas.[9] Hillary Rodham Clinton's memoirs call Foster "one of the best lawyers I've ever known," and compared him in style and substance to Gregory Peck's Atticus Finch role in the classic 1962 film To Kill a Mockingbird.[12] Writer Carl Bernstein has described Foster as "tall, with impeccable manners and a formal mien ... elegant in perfectly tailored suits, and soft-spoken to the point of taciturnity."[13] Writer Dan Moldea characterized him as "a 'can-do' lawyer who worked best when under pressure."[7] Phillip Carroll, the leading litigator at Rose Law Firm, once said of Foster, "He was my ideal of a young lawyer."[15] The ABA Journal reported that Foster was "acknowledged by many as the soul of the firm".[15]

He appeared to experience only success at Rose Law; a partner later said, "I never saw a professional setback. Never. Not even a tiny one."[14] The Arkansas Bar Association gave him a number of awards[8] and in June 1993 would name him as its Outstanding Lawyer of the Year.[7] His wife Lisa described him as driven to prevail, staying up around the clock to prepare for big cases, believing he would lose the case even though he rarely did; she later viewed this as an early sign of depressed behavior.[6] By 1992, Vince Foster was, as The Washington Post later wrote, at "the pinnacle of the Arkansas legal establishment."[16]

After Clinton's 1992 election, Foster joined his White House staff as Deputy White House Counsel in early 1993[5] after initially being reluctant to do so.[6] There he was joined with two other Rose Law Firm partners: William H. Kennedy, III, who served as his associate counsel, and Webster Hubbell, who became Associate Attorney General.[17] The Foster residence was on Cambridge Place in Georgetown in Washington, D.C.[18]

Foster had difficulty making the transition to life and politics in Washington.[16] He found his involvement in vetting new presidential appointments during the transition period to be causing him depression and anxiety,[16] and he blamed himself for the failed Zoë Baird nomination.[16] The failed Kimba Wood and Lani Guinier appointments were also within his purview.[19] His wife and youngest son were not with him, having stayed behind in Arkansas so the son could complete his junior year of high school at Catholic High in Little Rock.[10] Foster handled the Clintons' Madison Guaranty and Industrial Development Corporation paperwork,[20] and several Whitewater-related tax returns as Deputy White House counsel.[21]

In early May 1993, Foster gave the commencement address at his University of Arkansas Law School alma mater, and said:

The reputation you develop for intellectual and ethical integrity will be your greatest asset or your worst enemy. You will be judged by your judgment. ... There is no victory, no advantage, no fee, no favor, which is worth even a blemish on your reputation for intellect and integrity. ... Dents to [your] reputation are irreparable."[10]

Days after the speech, the White House travel office controversy erupted.[10] Foster was the target of several hostile Wall Street Journal editorials in June and July 1993,[16] with titles such as "Who is Vincent Foster?"[14] He became quite upset over the travel office matter and the possibility of a congressional hearing[16] at which he might have been called to testify.[19] Disliking the public spotlight[14] and suffering from weight loss and insomnia,[16] he considered resigning his position but feared a personal humiliation upon returning to Arkansas.[16] 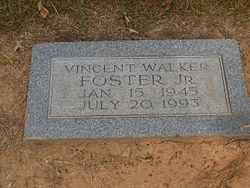 Wrestling with evident depression[14][16] (which after his death would be assessed as clinical depression),[22] Foster was prescribed the anti-depressant medication Trazodone over the phone by his Arkansas doctor, though he was given an insufficient initial dosage to have much effect.[14] The next day, Foster was found dead in Fort Marcy Park, a federal park in Virginia. He was found with a gun in his hand and gunshot residue on that hand. An autopsy determined that he was shot in the mouth and no other wounds were found on his body. A suicide note of sorts, in actuality a draft resignation letter, was found torn into 27 pieces in his briefcase. The letter contained a list of complaints, specifically including, "The WSJ editors lie without consequence"[23] and lamenting, "I was not meant for the job or the spotlight of public life in Washington. Here ruining people is considered sport."

His funeral Mass was held at the Cathedral of St. Andrew Catholic Church in Little Rock.[9] Bill Clinton gave an emotional eulogy in which he recalled their boyhood times together and quoted a line from Leon Russell's "A Song for You": "I love you in a place that has no space and time."[24] Foster was buried in Memory Gardens Cemetery in his hometown of Hope. Foster was 48 years old and was survived by his wife and three children.

There have been three official investigations into Foster's death, all of which concluded that he committed suicide.[25]

The first was by the United States Park Police in 1993, in whose jurisdiction the original investigation fell. Due to Foster's position in the White House, the Federal Bureau of Investigation assisted in the investigation. Investigations by a coroner and Independent Counsel Robert B. Fiske, in a 58-page report released in 1994, also concluded that Foster had committed suicide.[19] Theories of a cover-up still persisted, some of which were promulgated by the Arkansas Project.[26] The wild speculation and conspiracy theories featured on talk radio and elsewhere caused pain to the Foster family.[16]

After a three-year investigation, Whitewater independent counsel Ken Starr[27][28] released a report in 1997 also concluding that the death was a suicide.[19] In addition, two investigations by the U.S. Congress found that Foster committed suicide.[19]

Foster's death, occurring just six months into the new administration, is thought by some to have ended the optimism and remaining innocence of the White House staff.[29] White House chief-of-staff and childhood friend Mack McLarty said that "It was a deep cut. It clearly had a tremendous impact."[29] Fellow White House Counsel Bernard Nussbaum said that if Foster had lived, he would have helped resist the calls to appoint independent counsels, and the many investigations lumped under the Whitewater umbrella that occupied the administration and Clinton for the rest of his presidency, might not have happened.[29] As it happened, how Hillary Clinton's chief of staff, Maggie Williams, in particular handled Foster's files and documents immediately after his death became an issue of much investigation itself.[19][30]

Years later, Bill Clinton expressed his continued anger about the Foster rumors and theories, clenching a fist as he spoke: "I heard a lot of the right-wing talk show people ... and all the sleazy stuff they said. They didn't give a rip that he had killed himself or that his family was miserable or that they could break the hearts [of Foster's friends and family]. It was just another weapon to slug us with, to dehumanize us with."[31]

Foster's passing also had an effect on Rose Law Firm, as many within the firm had expected Foster to become its leader once he returned from service in Washington.[15] He was also thought likely to someday become president of the state bar association or a choice for a federal judgeship.[6] Beginning in 1993, the Vince Foster, Jr., Outstanding Lawyer Award was given out annually by the Pulaski County Bar Association to recognize members who contributed to the bar and advanced the legal profession.[32] An endowed chair at the University of Arkansas School of Law, the Vincent Foster University Professor of Legal Ethics and Professional Responsibility, was created in his name.[9] In August 2015, the then-tenured Vincent Foster University Professor of Legal Ethics and Professional Responsibility, Howard Brill, was appointed Chief Justice of the Arkansas Supreme Court.