From Infogalactic: the planetary knowledge core
Jump to: navigation, search
This article is about the ancient Celtic settlement. For the asteroid, see 231 Vindobona. For the train, see Vindobona (train). 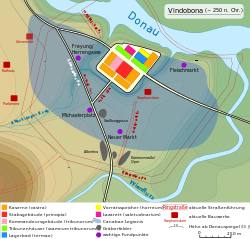 Vindobona (from Gaulish windo- "white" and bona "base/bottom") was a Celtic settlement and later a Roman military camp on the site of the modern city of Vienna in Austria.

Around 15 BC, the kingdom of Noricum was included in the Roman Empire. Henceforth, the Danube marked the border of the empire, and the Romans built fortifications and settlements on the banks of the Danube, including Vindobona with an estimated population of 15,000-20,000.[1][2] 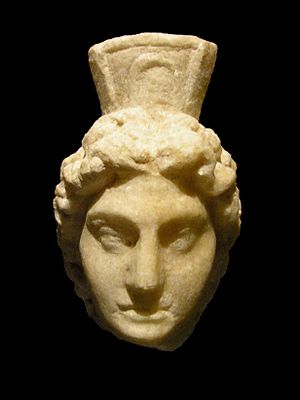 Head of a genius found during excavations of Vindobona 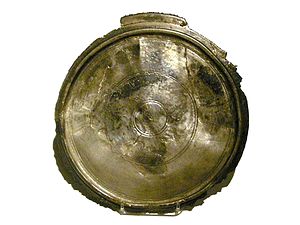 Silver plate, part of a larger find found around Kärntner Straße in 1945

Early references to Vindobona are made by the geographer Ptolemy in his Geographica and the historian Aurelius Victor, who recounts that emperor Marcus Aurelius died in Vindobona on the 17 March 180. Today, there is a Marc-Aurelstraße (English: Marcus Aurelius street) near the Hoher Markt in Vienna.

Vindobona was part of the Roman province Pannonia, of which the regional administrative centre was Carnuntum. Vindobona was a military camp with an attached civilian city (Canabae). The military complex covered an area of some 20 hectares, housing about 6000 men where Vienna’s first district now stands. The Danube marked the border of the Roman Empire, and Vindobona was part of a defensive network including the camps of Carnuntum, Brigetio and Aquincum. Under Emperor Trajan, four legions were stationed in Pannonia.[citation needed]

Marcus Aurelius is said to have died in Vindobona on March 17 in the year 180AD from an unknown illness while on a military campaign against invading Germanic tribes.

Vinndobona was provisioned by the surrounding Roman country estates (Villae rusticae). A centre of trade with a developed infrastructure as well as agriculture and forestry developed around Vindobona. Civic communities developed outside the fortifications (canabae legionis), as well another community that was independent of the military authorities in today's third district.[citation needed] It has also been proven that a Germanic settlement with a large marketplace existed on the far side of the Danube from the second century onwards.[citation needed]

The asymmetrical layout of the military camp, which was unusual for the otherwise standardised Roman encampments, is still recognisable in Vienna’s street plan: Graben, Naglergasse, Tiefer Graben, Salzgries, Rabensteig, Rotenturmstraße. The oblique camp border along today's street Salzgries was probably caused by a tremendous flood of the river Danube that occurred during the 3rd century and eroded a considerable part of the camp.[3] The name “Graben” (English: ditch) is believed to hark back to the defensive ditches of the military camp. It is thought that at least parts of the walls still stood in the Middle Ages, when these streets were laid out, and thus determined their routes. The Berghof was later erected in one corner of the camp.

Wars, administrative and military reforms in the 3rd and 4th century as well as devastating floods led the population to retreat more and more into the military camp.[citation needed] The area lost its importance as a border in the 5th century, and the local population lived within the former fortification.[citation needed]

Evidence for the Roman presence in Vindobona 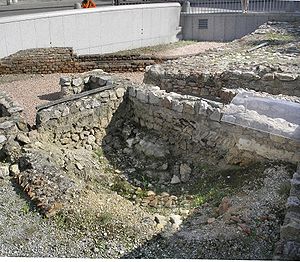 Remains of the Roman outpost at Michaelerplatz 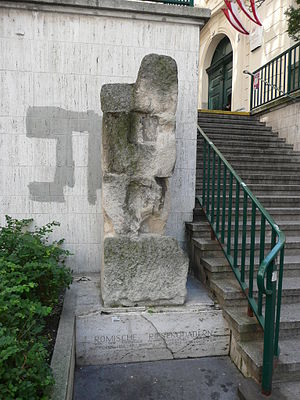 Roman stones from the thermae, at Sterngasse 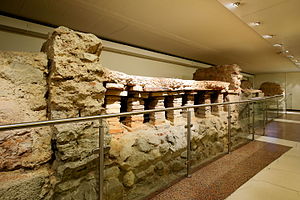 Remains of a hypocaust, found below Hoher Markt

Remains of the Roman military camp have been found at many sites in the centre of Vienna. The centre of the Michaelerplatz has been widely investigated by archaeologists. Here, traces of a Roman legionary outpost (canabae legionis) and of a crossroad have been found.[4] The centrepiece of the current design of the square is a rectangular opening that evokes the archaeological excavations at the site and shows wall remains that have been preserved from different epochs.

Part of a Roman canal system is underneath the fire station am Hof.[5]

Directly under the Hoher Markt are the remains of two buildings unearthed during the canalisation works of 1948/49 and made accessible to the public. After further excavation, a showroom was opened in 1961. For this purpose some of the original walls had to be removed; white marks on the floor show the spots where.[citation needed] The buildings, which are separated from one another by a road, housed an officer and his family.[citation needed] In 2008 this Roman ruins exhibit was expanded into the Museum of the Romans.[6] Only a small portion can today be seen, for the majority of the remains are still located underneath the square and south of it.

The remains of the walls date from different phases from the 1st to the 5th century AD. The houses were typical Roman villas, with living quarters and space for working set around a middle courtyard with columned halls.[7]

Evidence for the Roman military presence 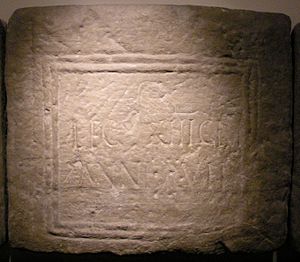 Over 3000 stamped bricks, several stone monuments and written sources prove that several legions, cavalry units and marines were stationed in Vindobona. Around 97. AD, Legio XIII Gemina was responsible for construction of the legionary camps. Because of the wars in Dacia, they were pulled out and redeployed in 101 AD. A decade later, Legio XIIII Gemina Martia Victrix followed. Legio X Gemina from Aquincum arrived in 114 AD and remained in Vindobona until the 5th century.[citation needed]

About 6000 soldiers were stationed in the Roman camp.[citation needed] Many of them were free from active duty during peaceful times and had other jobs.[citation needed] These so-called immunes were needed for the supply of goods and for the production and maintenance of weapons and commodities. They also extracted stone from quarries and wood from forests, produced bricks, and maintained the streets, bridges and the water system. Administrating the camp and ensuring its security required additional manpower. 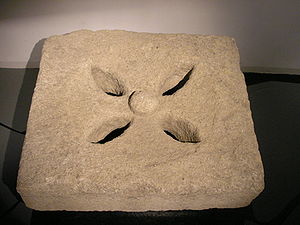 Manhole cover. Proper water supply and sanitation was vital for the functioning of the city

The Romans provided their cities, including Vindobona, with clean potable water through an elaborate systems of Roman aqueducts, canals, and large subterranean pipes. Excavations have revealed that Vindobona received its supply through a 17 km long water pipeline.[citation needed] The source is in the Vienna Woods around today's Kalksburg. Wells, latrines and the thermae were supplied with water. Central buildings such as the commander's office and the hospital had their own supplies, as did the settlement outside the camp, where households had their own groundwater wells.[citation needed]

Waste from the Roman camp was transported through an elaborate subterranean sewerage system that was planned from the beginning. The sewers were lined with brick walls and plates and ran beneath the main roads. Gradients were used in such a way that the waste water descended through the canals into the Danube River. Since the canals were up to two meters deep, they could be cleaned out regularly. Large waste was probably deposed at the slope of the river. In the civilian settlement, waste was deposed in former water wells and dumps.[citation needed]

The Cygnus-Relief was probably part of a larger public building 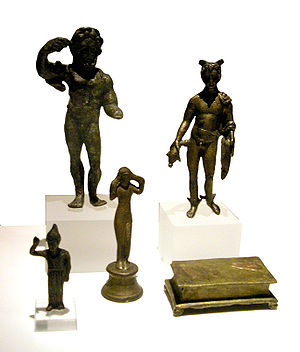 The layout of a Roman camp (castra) was normally standardised. This has helped archaeologists to reconstruct what the camp must have looked like, despite the heavy rebuilding that has taken place in Vienna throughout the centuries. The basic contours of the camp, which was surrounded by a mighty wall with towers and three moats (today the Tiefer Graben, Naglergasse, Graben, and Rotenturmstraße) are identifiable. Along these axes, main roads connected the gates with one other. The main buildings were the commander's headquarters, the Palace of the Legate, the houses of the staff officers, and the thermae. At right angles to these, the soldiers' accommodation, a hospital, workshops, and mews (stables) were constructed.[citation needed]

In one, the lead character's servant, Cicero, trying to get the attention of Lucilla, states, "I served with your father at Vindobona!"

In the other, the lead character asks if anyone in his group of gladiators has served in the army, to which an anonymous fighter responds, "I served with you at Vindobona."