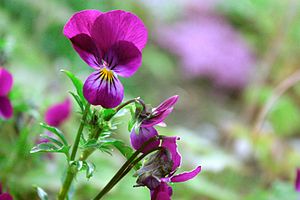 Viola (US /vaɪˈoʊlə/ and UK /ˈvaɪ.ələ/)[1] is a genus of flowering plants in the violet family Violaceae. It is the largest genus in the family, containing between 525 and 600 species.[2][3] Most species are found in the temperate Northern Hemisphere, however some are also found in widely divergent areas such as Hawaii, Australasia, and the Andes.

Some Viola species are perennial plants, some are annual plants, and a few are small shrubs. A large number of species, varieties and cultivars are grown in gardens for their ornamental flowers. In horticulture the term "pansy" is normally used for those multi-coloured, large-flowered cultivars which are raised annually or biennially from seed and used extensively in bedding. The terms "viola" and "violet" are normally reserved for small-flowered annuals or perennials, including the species.[4][5]

Viola typically have heart-shaped, scalloped leaves, though a number have palmate leaves or other shapes. The vast majority of Viola species are herbaceous, and a substantial number are acaulescent in habit - meaning they lack any noticeable stems and the foliage and flowers appear to rise from the ground; the remaining species have short stems with foliage and flowers produced in the axils of the leaves. The simple leaves of plants with either habit are arranged alternately; the acaulescent species produce basal rosettes. Plants always have leaves with stipules that are often leaf-like. 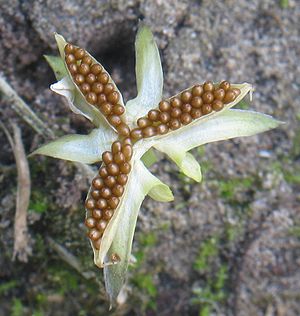 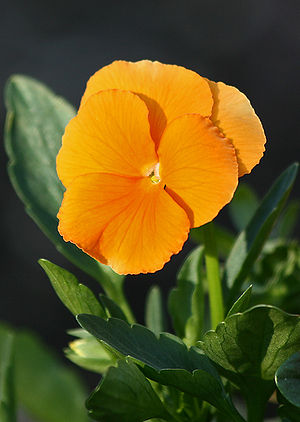 Viola cultivar showing the large round flowers and the novel coloration that has been achieved through breeding.

The flowers of the vast majority of the species are zygomorphic with bilateral symmetry. The flowers are formed from five petals; four are upswept or fan-shaped petals with two per side, and there is one broad, lobed lower petal pointing downward. The shape of the petals and placement defines many species, for example, some species have a "spur" on the end of each petal while most have a spur on the lower petal.

Solitary flowers end long stalks with a pair of bracteoles. The flowers have 5 sepals that persist after blooming, and in some species the sepals enlarge after blooming. The flowers have five free stamens with short filaments that are oppressed against the ovary, only the lower two stamens have nectary spurs that are inserted on the lowest petal into the spur or a pouch. The flower styles are thickened near the top and the stigmas are head-like, narrowed or often beaked. The flowers have a superior ovary with one cell, which has three placentae, containing many ovules.

After flowering, fruit capsules are produced that split open by way of three valves.[8] On drying, the capsules may eject seeds with considerable force to distances of several meters.[9] The nutlike seeds have straight embryos, flat cotyledons, and soft fleshy endosperm that is oily.[10] The seeds of some species have elaiosomes and are dispersed by ants.[11]

Flower colours vary in the genus, ranging from violet, through various shades of blue, yellow, white, and cream, whilst some types are bicolored, often blue and yellow. Flowering is often profuse, and may last for much of the spring and summer.

One quirk of some Viola is the elusive scent of their flowers; along with terpenes, a major component of the scent is a ketone compound called ionone, which temporarily desensitises the receptors of the nose, thus preventing any further scent being detected from the flower until the nerves recover.[citation needed] 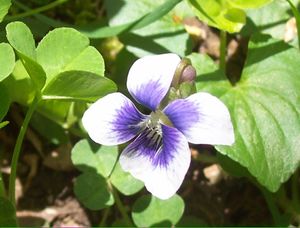 Note: Neither Saintpaulia ("African violets") nor Erythronium dens-canis ("dogtooth violets") are related to the true Viola.

The genus includes dog violets, a group of scentless species which are the most common Viola in many areas, sweet violet (Viola odorata) (named from its sweet scent), and many other species whose common name includes the word "violet". Several species are known as pansies, including the yellow pansy (Viola pedunculata) of the Pacific coast.

Australia is home to a number of Viola species, including Viola hederacea, Viola betonicifolia and Viola banksii, first collected by Joseph Banks and Daniel Solander on the Cook voyage to Botany Bay.

In 2005 in the United States, Viola cultivars (including pansies) were one of the top three bedding plant crops and 111 million dollars worth of flats of Viola were produced for the bedding flower market.[13] Pansies and violas used for bedding are generally raised from seed, and F1 hybrid seed strains have been developed which produce compact plants of reasonably consistent flower colouring and appearance. Bedding plants are usually discarded after one growing season. 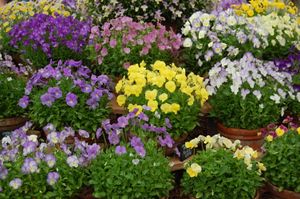 Selection of cultivated Violas at the BBC Gardeners' World show, in June 2011.

There are hundreds of perennial viola and violetta cultivars; many of these do not breed true from seed and therefore have to be propagated from cuttings. Violettas can be distinguished from violas by the lack of ray markings on their petals.[4] The following cultivars have gained the Royal Horticultural Society's Award of Garden Merit:-

Other popular examples include:[19]

Not all Viola are desired, and wild violets are considered weeds in North American lawns by some people.[citation needed] Others tolerate or welcome the presence of violets in lawns. Wild violets are regarded as a problem in shady fescue lawns in North America. Violets thrive in the part/full shade and are not susceptible to most herbicides used to kill common lawn weeds. Triclopyr, a weedkiller, has been found to be an effective method of controlling wild violets in fescue lawns.

When newly opened, Viola flowers may be used to decorate salads or in stuffings for poultry or fish. Soufflés, cream, and similar desserts can be flavoured with essence of Viola flowers. The young leaves are edible raw or cooked as a somewhat bland leaf vegetable. The flowers and leaves of the cultivar 'Rebecca', one of the Violetta violets, have a distinct vanilla flavor with hints of wintergreen. The pungent perfume of some varieties of V. odorata adds inimitable sweetness to desserts, fruit salads, and teas while the mild pea flavor of V. tricolor combines equally well with sweet or savory foods, like grilled meats and steamed vegetables. The heart-shaped leaves of V. odorata provide a free source of greens throughout a long growing season.[20]

A candied violet or crystallized violet is a flower, usually of Viola odorata, preserved by a coating of egg white and crystallised sugar. Alternatively, hot syrup is poured over the fresh flower (or the flower is immersed in the syrup) and stirred until the sugar recrystallizes and has dried. This method is still used for rose petals and was applied to orange flowers in the past (when almonds or orange peel are treated this way they are called pralines). Candied violets are still made commercially in Toulouse, France, where they are known as violettes de Toulouse. They are used as decorating or included in aromatic desserts.

The French are also known for their violet syrup, most commonly made from an extract of violets. In the United States, this French violet syrup is used to make violet scones and marshmallows.

Many Viola species contain antioxidants called anthocyanins. Fourteen anthocyanins from V. yedoensis and V. prionantha have been identified. Some anthocyanins show strong antioxidant activities.[21] Most violas tested and many other plants of the family Violaceae contain cyclotides,[22][23][24] which have a diverse range of in vitro biological activities when isolated from the plant, including uterotonic, anti-HIV, antimicrobial, and insecticidal activities.[25] Viola canescens, a species from India, exhibited in vitro activity against Trypanosoma cruzi.[26]

Viola has been evaluated in different clinical indications in human studies. A double blind clinical trial showed that the adjuvant use of viola odorata syrup with short-acting β-agonists can improve the cough suppression in children with asthma.[27][28][29][30] In another study intranasal administration of viola odorata extract oil showed to be effective in patients with insomnia.[28][31] Topical use of an herbal formulation containing Viola tricolor extract also showed promising effects in patients with mild-to-moderate atopic dermatitis.[32]

Viola odorata is used as a source for scents in the perfume industry. Violet is known to have a 'flirty' scent as its fragrance comes and goes. Ionone is present in the flowers, which turns off the ability for humans to smell the fragrant compound for moments at a time.[33]

Violets, and badges depicting them,[34][35] were sold in fund-raising efforts in Australia and New Zealand on and around Violet Day[36] in commemoration of the lost soldiers of World War I.[37]