Violet Oakley (June 10, 1874 – February 25, 1961) was the first American woman to receive a public mural commission. During the first quarter of the twentieth century, she was renowned as a pathbreaker in mural decoration, a field that had been exclusively practiced by men. Oakley excelled at murals and stained glass designs that addressed themes from history and literature in Renaissance-revival styles. 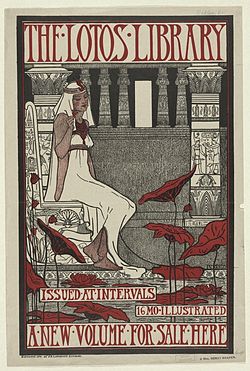 Lithograph by Oakley for The Lotos Library (1896)

Oakley was born in Bergen Heights (a section of Jersey City), New Jersey, into a family of artists. Her parents were Arthur Edmund Oakley and Cornelia Swain. Both of her grandfathers were member of the National Academy of Design.[1] In 1892, she studied at the Art Students League of New York. A year later, she studied in England and France, under Raphaël Collin and others. After her return to the United States in 1896, she studied briefly at the Pennsylvania Academy of the Fine Arts before she joined Howard Pyle's famous illustration class at Drexel Institute. She had early success as a popular illustrator for magazines including The Century Magazine, Collier's Weekly, St. Nicholas Magazine, and Woman's Home Companion.[2] The style of her illustrations and stained glass reflects her emulation of the English Pre-Raphaelites. Oakley's commitment to Victorian aesthetics during the advent of Modernism led to the decline of her reputation by the middle of the twentieth century.

Oakley's political beliefs were shaped by the Quaker William Penn (1644-1718) whose ideals she represented in her murals at the Pennsylvania State Capitol. She became committed to the Quaker principles of pacifism, equality of the races and sexes, economic and social justice, and international government. When the United States refused to join the League of Nations after the Great War, Oakley went to Geneva, Switzerland, and spent three years drawing portraits of the League's delegates which she published in her portfolio, "Law Triumphant" (Philadelphia, 1932). She was an early advocate of nuclear disarmament after World War II.

Oakley was raised in the Episcopal church but in 1903 became a devoted student of Christian Science after a significant healing of asthma while she was doing preparatory study for the first set of Harrisburg murals in Florence, Italy.[3] She was a member of Second Church of Christ, Scientist, Philadelphia from 1912, when it was organized, until her death in 1961.[4]

She received many honors through her life including an honorary Doctorate of Laws Degree in 1948 from Drexel Institute.[1] In 1905, she became the first woman to receive the Gold Medal of Honor from the Pennsylvania Academy of Fine Arts.[2] 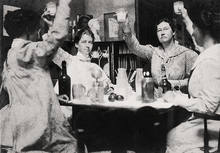 Oakley and her friends, the artists Elizabeth Shippen Green and Jessie Willcox Smith, all former students of Pyle, were named the Red Rose girls by him. The three illustrators received the "Red Rose Girls" nickname while they lived together in the Red Rose Inn in Villanova, Pennsylvania from 1899 to 1901. They later lived, along with Henrietta Cozens, in a home in the Mt. Airy neighborhood of Philadelphia that they named Cogslea after their four surnames (Cozens, Oakley, Green and Smith). In 1996, Oakley was elected to the Society of Illustrators Hall of Fame, the last of the 'Red Rose Girls' to be inducted, but one of only ten women in the hall. Cogslea was added to the National Register of Historic Places in 1977 as the Violet Oakley Studio.[5] Her home and studio at Yonkers, New York, where she resided intermittently between 1912 and 1915 is also listed on the National Register of Historic Places as the Plashbourne Estate.[6]

Oakley was a member of Philadelphia's The Plastic Club, an organization established to promote "Art for art's sake". Other members included Elenore Abbott, Jessie Willcox Smith, and Elizabeth Shippen Green.[7] Many of the women who founded the organization had been students of Howard Pyle. It was founded to provide a means to encourage one another professionally and create opportunities to sell their works of art.[7][8]

As educational opportunities were made more available in the 19th-century, women artists became part of professional enterprises, including founding their own art associations. Artwork made by women was considered to be inferior, and to help overcome that stereotype women became "increasingly vocal and confident" in promoting women's work, and thus became part of the emerging image of the educated, modern and freer "New Woman".[11] Artists "played crucial roles in representing the New Woman, both by drawing images of the icon and exemplyfying this emerging type through their own lives." In the late 19th-century and early 20th century about 88% of the subscribers of 11,000 magazines and periodicals were women. As women entered the artist community, publishers hired women to create illustrations that depict the world through a woman's perspective. Other successful illustrators were Jennie Augusta Brownscombe, Jessie Wilcox Smith, Rose O'Neill, and Elizabeth Shippen Green.[12]

Oakley painted a series of 43 murals in the Pennsylvania State Capitol Building in Harrisburg for the Governors Grand Reception Room, the Senate and the Supreme Court. Oakley was originally commissioned only for the murals in the Governor's Grand Reception Room, which she titled "The Founding of the State of Liberty Spiritual." In the fourteen reception room murals, Oakley depicts the story of William Penn and the founding of Pennsylvania. She conducted extensive research on the subject, even traveling to England. The series of murals were unveiled in the new Capitol Building in November 1906, shortly after the dedication of the building. When Edwin Austin Abbey died in 1911, Violet Oakley was offered the job of creating the murals for the Senate and Supreme Court Chambers, a 16-year project.[citation needed]