From Infogalactic: the planetary knowledge core
Jump to: navigation, search
This article is about the Andean deity. For other uses, see Wiraqucha (disambiguation).

Viracocha is the great creator deity in the pre-Inca and Inca mythology in the Andes region of South America. Full name and some spelling alternatives are Wiracocha,[1] Apu Qun Tiqsi Wiraqutra, and Con-Tici (also spelled Kon-Tiki, the source of the name of Thor Heyerdahl's raft) Viracocha. Viracocha was one of the most important deities in the Inca pantheon and seen as the creator of all things, or the substance from which all things are created, and intimately associated with the sea.[2] Viracocha created the universe, sun, moon, and stars, time (by commanding the sun to move over the sky)[3] and civilization itself. Viracocha was worshipped as god of the sun and of storms. He was represented as wearing the sun for a crown, with thunderbolts in his hands, and tears descending from his eyes as rain.

Cosmogony according to Spanish accounts

According to a myth recorded by Juan de Betanzos,[4] Viracocha rose from Lake Titicaca (or sometimes the cave of Paqariq Tampu) during the time of darkness to bring forth light.[5] He made the sun, moon, and the stars. He made mankind by breathing into stones, but his first creation were brainless giants that displeased him. So he destroyed it with a flood and made a new, better one from smaller stones.[6] Viracocha eventually disappeared across the Pacific Ocean (by walking on the water), and never returned. He wandered the earth disguised as a beggar, teaching his new creations the basics of civilization, as well as working numerous miracles. He wept when he saw the plight of the creatures he had created.[citation needed] It was thought that Viracocha would re-appear in times of trouble. Pedro Sarmiento de Gamboa wrote that Viracocha was described as "a man of medium height, white and dressed in a white robe like an alb secured round the waist, and that he carried a staff and a book in his hands."[7]

In one legend he had one son, Inti, and two daughters, Mama Killa and Pachamama. In this legend, he destroyed the people around Lake Titicaca with a Great Flood called Unu Pachakuti, saving two to bring civilization to the rest of the world, these two beings are Manco Cápac, the son of Inti (sometimes taken as the son of Viracocha), which name means "splendid foundation", and Mama Uqllu, which means "mother fertility". These two founded the Inca civilization carrying a golden staff, called 'tapac-yauri'. In another legend, he fathered the first eight civilized human beings. In some stories, he has a wife called Mama Qucha.

In another legend,[8] Viracocha had two sons, Imahmana Viracocha and Tocapo Viracocha. After the Great Flood and the Creation, Viracocha sent his sons to visit the tribes to the northeast and northwest to determine if they still obeyed his commandments. Viracocha himself traveled North. During their journey, Imaymana and Tocapo gave names to all the trees, flowers, fruits, and herbs. They also taught the tribes which of these were edible, which had medicinal properties, and which were poisonous. Eventually, Viracocha, Tocapo and Imahmana arrived at Cusco (in modern-day Peru) and the Pacific seacoast where they walked across the water until they disappeared. The word "Viracocha" literally means "Sea Foam."[8]

Tiqsi Huiracocha may have several meanings. In the Quechua language tiqsi means foundation or base, wira means fat, and qucha means lake, sea, or reservoir.[9] Viracocha's many epithets include great, all knowing, powerful, etc. Wiraqucha could mean "Fat (or foam) of the sea".[2][10]

The name is also interpreted as a celebration of body fat (Sea of fat), which has a long pre-Hispanic tradition in the Andes region as it is natural for the peasant rural poor to view fleshiness and excess body fat as the very sign of life, good health, strength, and beauty.[11]

Spanish chroniclers from the 16th century claimed that when the conquistadors led by Francisco Pizarro first encountered the Incas they were greeted as gods, "Viracochas", because their lighter skin resembled their god Viracocha.[12] This story was first reported by Pedro Cieza de León (1553) and later by Pedro Sarmiento de Gamboa. Similar accounts by Spanish chroniclers (e.g. Juan de Betanzos) describe Viracocha as a "White God", often with a beard.[13] The whiteness of Viracocha is however not mentioned in the native authentic legends of the Incas and most modern scholars therefore had considered the "White God" story to be a post-conquest Spanish invention.[14][15] However archaeological finds seem to support a bearded god culture, as shown in the image of ceramic bearded vessels below, this was first comprehensively looked at by Thor Heyerdahl. 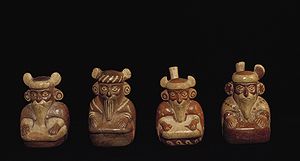 Similarly to the Incan god Viracocha, the Aztec god Quetzalcoatl and several other deities from Central and South American pantheons, like the Chibcha/Muisca god Bochica are described in legends as being bearded. The beard, once believed to be a mark of a prehistoric European influence and quickly fueled and embellished by spirits of the colonial era, had its single significance in the continentally insular culture of Mesoamerica. The Anales de Cuauhtitlan is a very important early source which is particularly valuable for having been originally written in Nahuatl. The Anales de Cuauhtitlan describes the attire of Quetzalcoatl at Tula:

In this quote the beard is represented as a dressing of feathers, fitting comfortably with academic impressions of Mesoamerican art. The story, however, does not mention whether Viracocha had facial hair or not with the point of outfitting him with a mask and symbolic feathered beard being to cover his unsightly appearance because as Viracocha said "If ever my subjects were to see me, they would run away!"[17] While descriptions of Viracocha's physical appearance are open to interpretation, it should be noted that men with beards were frequently depicted by the Peruvian Moche culture in its famous pottery, long before the arrival of the Spanish.[18] Modern advocates of fringe theories however such as a pre-Columbian European migration to Peru continue to cite these bearded ceramics and Viracocha's beard as being evidence for an early presence of a non-Amerindian race in Peru.[19][20] Although most Indians do not have heavy beards, there are groups who do, such as the Aché of Paraguay who also have light skin but who show no evidence of admixture with Europeans and Africans.[21] When the Southern Paiutes were first contacted by Europeans in 1776, the report by fathers Silvestre Vélez de Escalante and Francisco Atanasio Domínguez noted that "Some of the men had thick beards and were thought to look more in appearance like Spanish men than native Americans".[22]

Representation of Wiracochan or Tunupa at Ollantaytambo 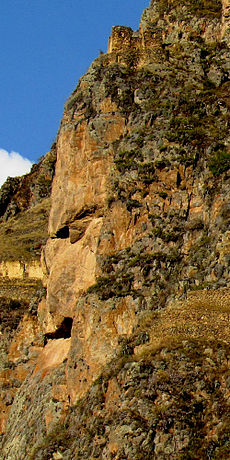 Face in stone of Wiracochan or Tunupa at Ollantaytambo

According to local myth, a representation of the messenger of Viracocha ('The Creator of Civilization') named Wiracochan or Tunupa is shown in the small village of Ollantaytambo, southern Peru. Ollantaytambo located in the department of Cusco makes up a chain of small villages along the Urubamba Valley. Also known as the Sacred Valley of the Incas, it was an important stronghold of the Incan Empire. Facing the ancient Inca ruins of Ollantaytambo in the rock face of Cerro Pinkuylluna is the 140 metre high figure of Wiracochan. The angry-looking formation of his face is made up of indentations that form the eyes and mouth, whilst a protruding carved rock denotes the nose. Inca ruins built on top of the face are also considered to represent a crown on his head. Artists' impressions of the rock face also include a heavy beard and a large sack upon his shoulders.

The face of Viracocha at Ollantaytambo can be captured as noted by Fernando and Edgar Elorrieta Salazar.[1] Wiracochan, the pilgrim preacher of knowledge, the master knower of time, is described as a person with superhuman power, a tall man, with short hair, dressed like a priest or an astronomer with tunic and a bonnet with four pointed corners.

According to travel writer Paul Jones,[23] "This incredible myth of a Viracocha spreads throughout South America and beyond. This ancient mystical God, who by local legend rose from the middle of Lake Titicaca to create mankind was and is still today truly respected. The rock carving at Ollantaytambo is a striking reminder of the spiritual connections the Incas had with the Andes."