From Infogalactic: the planetary knowledge core
Jump to: navigation, search
For the 1971 collection of this artist's work, see Virgil Finlay (book). 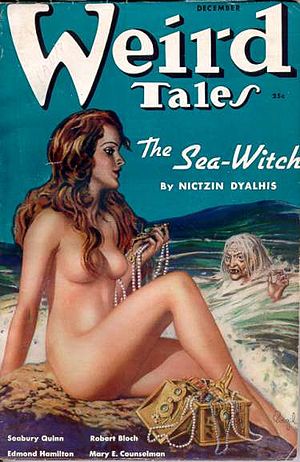 Virgil Finlay (July 23, 1914 – January 18, 1971) was an American pulp fantasy, science fiction and horror illustrator. He has been called "part of the pulp magazine history ... one of the foremost contributors of original and imaginative art work for the most memorable science fiction and fantasy publications of our time."[1] While he worked in a range of media, from gouache to oils, Finlay specialized in, and became famous for, detailed pen-and-ink drawings accomplished with abundant stippling, cross-hatching, and scratchboard techniques. Despite the very labor-intensive and time-consuming nature of his specialty, Finlay created more than 2600 works of graphic art in his 35-year career.

The Science Fiction Hall of Fame inducted Finlay in 2012.[2] 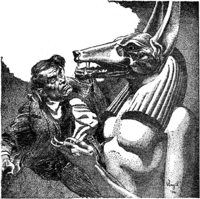 Virgil Warden Finlay was born and raised in Rochester, New York; his father, woodworker Warden Hugh Finlay, died at age 40 in the midst of the Great Depression, leaving his family (widow Ruth and two children, Jean and Virgil) in straitened circumstances. By his high school years, Virgil Finlay was exercising his passions for art and poetry, and discovered his lifelong subject matter in the pulp magazines of the era—science fiction in Amazing Stories (1927), fantasy and horror in Weird Tales (1928)—and began to exhibit at the age of 16. By age 21 he was confident enough in his art to send six pieces, unsolicited, to editor Farnsworth Wright at Weird Tales, who determined that such detailed work would transfer successfully to relatively rough paper the magazine used (they were called "pulps" for a reason). Wright began buying Finlay's work, which debuted with illustrations of three different stories in the December 1935 issue[3] and appeared in 62 issues including the last in September 1954. He also created 19 color covers for Weird Tales numbers from February 1937 to March 1953.[4] (In the latter year he won one of the inaugural Hugo Awards, as the previous year's best "Interior Illustrator"; cover artists and interior illustrators were not thereafter distinguished by the Hugo Award for Best Artist under various names. He was also named the best artist of 1945 in the 50-year Retro Hugos of 1996.)[5]

Finlay quickly branched out to other publications after his 1935 debut; he was an immediate hit. In 1938 he went to work for A. Merritt at The American Weekly, moving from Rochester to New York City. Later the same year, he married Beverly Stiles, whom he had known in childhood in Rochester (Nov. 16, 1938). His adjustment to the city and to his new job was not smooth, however; he was fired and re-hired more than once. Yet during his period on the magazine's staff (1938–43), and later as a freelancer (1946–51), Finlay estimated that he produced 845 different illustrations, large and small, for Merritt's magazine.

Finlay served in the US Army during World War II, and saw extensive combat in the South West Pacific theater, notably on Okinawa, and did posters and illustrations for the Morale Services during his three years of military service. He resumed his artistic career after demobilization, doing a considerable amount of work for science fiction magazines and books. As the pulp magazine market narrowed through the 1950s, Finlay turned to astrology magazines as a new venue for his art.

Finlay also wrote poetry throughout his adult life. Virtually none was published in his lifetime, though significant samples have been printed posthumously.[6]

Finlay had to undergo major surgery for cancer in early 1969. He recovered enough to go back to work for a time, but the cancer returned, and Finlay died of the disease early in 1971, aged 56. Finlay just missed a resurgence in interest in his artwork from the early 1970s onward. Both Donald M. Grant and Gerry de la Ree have published series of collections of Finlay artwork since the artist's death. The later books published by Underwood-Miller contain illustrations from the Gerry de la Ree editions, as well as additional material. A slightly later generation of fantasy fans were introduced to Finlay's art by reprints of his earlier work in the horror film fan magazine Castle of Frankenstein alongside the fine writing that gave significance to that magazine.

Roads, a fantasy novella by Seabury Quinn, first published in the January 1938 Weird Tales, and featuring a cover and interior illustrations by Finlay, was originally published in a very limited edition by Arkham House in 1948. It was recently given a 21st-century facsimile reprinting by Red Jacket Press.