From Infogalactic: the planetary knowledge core
(Redirected from Virginia Stamp Act Resolutions)
Jump to: navigation, search
This article is about the pre-revolutionary resolves against the Stamp Act. For the later resolution against the Alien and Sedition Acts, see Virginia Resolution. 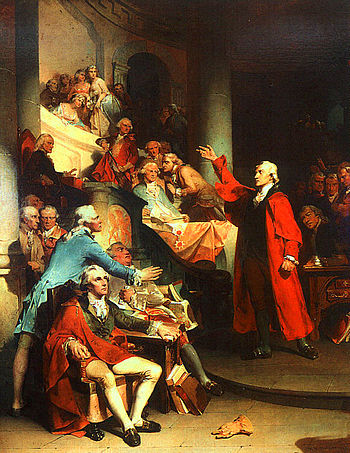 Patrick Henry's speech on the Virginia Resolves (an 1851 painting by Peter F. Rothermel)

The Virginia Resolves were a series of resolutions passed by the Virginia House of Burgesses in response to the Stamp Act of 1765. The Stamp Act had been passed by the British Parliament to help pay off some of its debt from its various wars, including the French and Indian War fought in part to protect the American colonies.

The resolves claimed that in accordance with long established British law, Virginia was subject to taxation only by a parliamentary assembly to which Virginians themselves elected representatives. Since no colonial representatives were elected to the Parliament the only assembly legally allowed to raise taxes would be the Virginia General Assembly.

On May 29, 1765, Patrick Henry made one of his famous speeches before the Virginia House of Burgesses to encourage the passage of the resolutions. Henry said "Caesar had his Brutus, Charles I his Cromwell, and George III... (Henry was interrupted by cries from the opposition)… may profit by their example. If this be treason, make the most of it." When Patrick Henry paused after the vibrant portion of the speech, Speaker John Robinson stood and shouted, "Treason! Treason!". Patrick Henry at this point issued a semi-apology.

Peyton Randolph later told his young cousin Thomas Jefferson who was standing in the doorways of the House quite frequently. "By God, I would have given 500 guineas for a single vote".

Henry had waited for most of the more conservative members of the assembly to be away before submitting the resolves. The Burgesses generally voted along geographic lines with eastern Virginians opposing the resolves and central Virginians supporting them. Patrick Henry left Williamsburg, Virginia that night fearing the powerful members of the House would harass him with a warrant.

The next day, with Patrick Henry gone and most conservative assembly members back in session, the assembly again set a vote with conservatives trying to have the Resolves struck from the record. However Henry's supporters managed to preserve the first four resolutions with only the more radical 5th Resolution being struck.[1]

In late June the Newport Mercury was the first newspaper to publish the Virginia Resolves to the general public with several other newspapers following soon after. Notably none of the newspapers drew on the official House records and as a result the published resolutions included not only the 4 ratified resolutions but also the, already removed, 5th resolution. In fact the newspapers even went so far to include a 6th and 7th resolution the origin of which is still disputed. Some sources quote those two articles as being part of Henry's original manuscript[2] while others argue that their origin is completely unknown.

A direct result of the publishing of the Virginia Resolves was a growing public anger over the Stamp Act and according to several contemporary sources the Resolves were responsible for inciting the Stamp Act Riots. Governor Thomas Hutchinson of Massachusetts stated that "Nothing extravagant appeared in the papers till an account was received of the Virginia Resolves." Later Edmund Burke linked the resolves with the beginning of the opposition to the Stamp Act that would contribute to the American Revolution.

Text of the Virginia Resolves

The original text of the Virginia Resolves as adopted by the House of Burgesses on May 29, 1765 was as follows:

1. Resolved, that the first adventurers and settlers of His Majesty's colony and dominion of Virginia brought with them and transmitted to their posterity, and all other His Majesty's subjects since inhabiting in this His Majesty's said colony, all the liberties, privileges, franchises, and immunities that have at any time been held, enjoyed, and possessed by the people of Great Britain.

2. Resolved, that by two royal charters, granted by King James I, the colonists aforesaid are declared entitled to all liberties, privileges, and immunities of denizens and natural subjects to all intents and purposes as if they had been abiding and born within the Realm of England.

3. Resolved, that the taxation of the people by themselves, or by persons chosen by themselves to represent them, who can only know what taxes the people are able to bear, or the easiest method of raising them, and must themselves be affected by every tax laid on the people, is the only security against a burdensome taxation, and the distinguishing characteristic of British freedom, without which the ancient constitution cannot exist.

4. Resolved, that His Majesty's liege people of this his most ancient and loyal colony have without interruption enjoyed the inestimable right of being governed by such laws, respecting their internal policy and taxation, as are derived from their own consent, with the approbation of their sovereign, or his substitute; and that the same has never been forfeited or yielded up, but has been constantly recognized by the kings and people of Great Britain.

This 5th resolution was originally adopted along with the other 4 on May 29, but struck the next day in a separate vote by the assembly.

When the Virginia Resolves were first published in colonial newspapers the articles cited not only the officially adopted 4 resolutions but included the, already revoked, 5th resolution along with two more resolution the origin of which is still disputed. Those additional resolution were:

6. Resolved, That his majesty's liege people, the inhabitants of this colony, are not bound to yield obedience to any law or ordinance whatsoever designed to impose any taxation whatsoever upon them, other than the laws and ordinances of the general assembly aforesaid.

7. Resolved, That any person who shall by speaking or writing maintain that any person or persons other than the general assembly of this colony have any right or power to impose or lay any taxation whatsoever on the people here shall be deemed an enemy to this his majesty's colony.

These two resolutions were never passed by the House of Burgesses and it is not known who authored them although some sources claim that they were part of the original draft by Patrick Henry.