Virginia is for Lovers 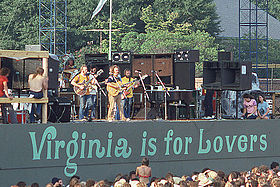 Virginia is for Lovers is the tourism and travel slogan of the Commonwealth of Virginia. Used since 1969,[1] it has become a well-recognized and often imitated part of American jargon. In 2012, Advertising Age called Virginia is for Lovers "one of the most iconic ad campaigns in the past 50 years."[2]

The first year that the slogan was introduced, travelers spent $800 million in Virginia. By 2004, that number had increased to more than $14 billion, making Virginia the tenth most popular tourist destination of the fifty states.[citation needed]

American Idol winner Jordin Sparks recorded a song called "Virginia is for Lovers" in 2007, which was featured as a bonus track on her eponymous debut album. The slogan is mentioned in The Hold Steady song "Killer Parties."

Will Adler, ESP Guitars artist, has the slogan printed on the neck of his custom guitars.

New York drew on Virginia's success to create the I Love New York logo nearly a decade later in 1977[citation needed]. Maryland also parodied this phrase with its own "Maryland is for Crabs" slogan.