From Infogalactic: the planetary knowledge core
Jump to: navigation, search
This article is about the city. For the ship, see Visby-class corvette.

Visby [ˈviːspʏ] is a locality and the seat of Gotland Municipality in Gotland County, Sweden with 23,576 inhabitants, as of 2012.[2] Visby is also the episcopal see for the Diocese of Visby. It is the only locality with historical city status on the island of Gotland. The Hanseatic city of Visby is arguably the best-preserved medieval city in Scandinavia and since 1995, it is on the UNESCO World Heritage Site list.[3] Among the most notable historical remains are the 3.4 km (2.1 mi) long town wall that encircles the town center, and a number of church ruins.

Visby is a popular vacation destination for Scandinavians during the summer and receives thousands of tourists every year. It is by far the most populated locality outside the Swedish mainland. Visby is also the only municipality seat of Sweden that is accessible only by boat and air traffic. The University of Gotland is in Visby, and since 1 July 2013, it is a department of Uppsala University under the name Uppsala university–Campus Gotland.

The name "Visby" comes from the Old Norse Vis, (genitive singular of Vi) meaning "(pagan) place of sacrifices", and by, meaning "village". In the Gutasagan (mid 14th century) the place is referred to as just Wi meaning "holy place, place of worship".[4]

The earliest history of Visby is uncertain, but it is known to have been a centre of merchandise around 900 AD. It was inhabited as early as the Stone Age, probably because of the access to fresh water and a natural harbour.[5]

In the 12th century, Visby Cathedral, dedicated to Saint Mary, was constructed. It was reshaped in the 13th century to its current appearance, and was officially opened in 1225, by the bishop of the Swedish city of Linköping. Several other churches were also constructed in the ensuing centuries. The city flourished, thanks to the German Hanseatic League.[6] 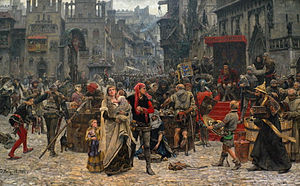 The work on the ring wall was likely begun in the 12th century. Around 1300, it was rebuilt to reach its current height, acquiring the characteristic towers, although some towers were not constructed until the 15th century. The ringwall is still largely intact.[7]

In 1361, Gotland was conquered by Valdemar IV of Denmark. 1,800 Gotlanders were killed in battle in front of the city. Valdemar tore down part of the wall, set up three huge beer barrels and threatened to turn his men loose to pillage the town unless they were filled with silver and gold. The Visby city fathers fulfilled the demand, with churches stripped of their valuables. Valdemar added "King of Gotland" to his title list.[8] His treatment of Visby, a member of the Hanseatic League, precipitated that League into war with Denmark; however, though Valdemar was forced into various concessions, he retained Visby as a Danish city.[9]

In 1391, 1394 and 1398, it was taken and plundered by the Victual Brothers, pirates who sailed the Baltic Sea. An invading army of Teutonic Knights conquered Gotland in 1398, destroyed Visby and expelled the Victual Brothers.[9] In 1409, Grand Master Ulrich von Jungingen of the Teutonic Knights guaranteed peace with the Kalmar Union of Scandinavia by selling the island of Gotland to Queen Margaret of Denmark, Norway and Sweden.[9]

In 1411, King Eric of Pomerania had the castle of Visborg constructed, and settled himself there for twelve years, during which the city virtually became a pirates' nest, and the commerce halted. As of 1470, the Hanseatic League rescinded Visby's status as a Hanseatic town.[9]

In 1525, the final blow came. The merchants of Visby were in a feud with Lübeck, a Free City of the Holy Roman Empire and a leading member of the Hanseatic League. The Lübeckers burned down all Visby's churches except the cathedral. The ruins have been preserved until this day, adding a sense of gravity to the modern city.[9]

Gotland was again taken into Sweden's possession in 1645, by the Treaty of Brömsebro, after 300 years of Danish rule.[9] The city developed slowly as things were left as they were.[10] In the mid 18th century, after a plague had reduced Visby's population, some attempts were made by Swedish government officials to improve living standards, but little was accomplished. Not until the early 19th century did Visby once again attract commerce and a harbour industry. At the same time – 1808 – Gotland was conquered by Russia, but was peacefully taken back by the Swedes after only a couple of months.[9]

During the first week of July, Visby is the scene of the Almedalen Week (Almedalsveckan), an important forum for everyone involved in Swedish politics. During the week, representatives from the major political parties in Sweden take turns giving speeches in the Almedalen park.[14]

In August, the tourist season is at its peak. During week 32, from Sunday to Sunday, the annual Medieval Week (Medeltidsveckan) is held. During this week regularly dressed tourists are outnumbered by people dressed in Medieval costumes. The festival started in 1984. There are a variety of events: music, jesters, theatre, a medieval market, jousting tournaments and much more.[15]

The headquarter of the World Ecological Forum is in Visby.[16] 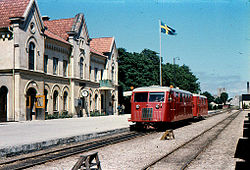 Train at Visby railway station the last year of traffic, 1960

Visby is linked to the mainland of Sweden by ferry and by plane. Ferries arrive from both Oskarshamn in Småland and Nynäshamn, near Stockholm, each taking about three hours. The ferry is run by Destination Gotland and subsidized by the Swedish government.

Visby gave its name to the 1968 Visby Amendments, which were an amendment of the Hague Rules of shipping law, leading to the Hague–Visby Rules.

Near Visby, there is the static inverter plant for the first HVDC interconnection of a windpark (HVDC Visby–Näs).

Culture and the arts

Swedish author Mari Jungstedt has set nine detective novels on the island of Gotland. The principal character, DS Anders Knutas, is based at police headquarters in Visby, and there are numerous descriptive passages of the city and the island.

Hayao Miyazaki noted that Visby is the main visual inspiration for the town in Kiki's Delivery Service, with elements of other locations such as Stockholm also blended in.[17]

The following sports clubs are located in Visby:

According to the Köppen climate classification, Visby has an oceanic climate. This renders cooler summers and milder winters than most of mainland Sweden. However, in spite of its marine position the climate is very much influenced by continental airflows. The precipitation amount is quite moderated, especially for an oceanic climate, but is relatively consistent throughout the year.