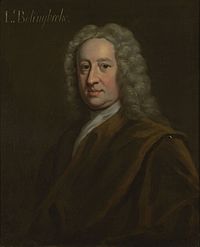 St John later represented Wiltshire in Parliament and was a strong supporter of King Charles I during the Civil War. His younger son, the third Baronet, represented both Wiltshire and Wootton Bassett in Parliament. His son, the fourth Baronet, also represented these constituencies in the House of Commons. In 1716 he was raised to the Peerage of Great Britain as Baron St John, in the County of Surrey, and Viscount St John, with remainder to his second and third sons, as his eldest son Henry St John had already been created Baron St John, of Lydiard Tregoze in the County of Wilts, and Viscount Bolingbroke in 1712 see below). Lord St John was succeeded according to the special remainder by his second son, the 2nd Viscount. He also represented Wootton Bassett in Parliament. In 1751 his son, the 3rd Viscount, succeeded his uncle as 2nd Viscount Bolingbroke and 2nd Baron St John according to a special remainder in the letters patent.

The titles have remained united ever since. His son, the 3rd and 4th Viscount, briefly represented Cricklade in Parliament. As of 2014[update] the titles are held by his great-great-great-great-grandson, the 8th Viscount Bolingbroke and 9th Viscount St John. He lives in New Zealand. As of 28 February 2014 the present Baronet has not successfully proven his succession and is therefore not on the Official Roll of the Baronetage, with the baronetcy considered dormant since 1974.[2]

The titles Baron St John, of Lydiard Tregoze in the County of Wilts, and Viscount Bolingbroke were created in the Peerage of Great Britain in 1712 for the politician and orator the Hon. Henry St John, the eldest son of Henry St John, 1st Viscount St John. The peerages were created with remainder to his father and his male heirs. Lord Bolingbroke died childless and was succeeded according to the special remainder by his nephew, the second Viscount, who had already succeeded as third Viscount St John in 1749 (see above).

The family seat was, until its sale, Lydiard House, near Lydiard Tregoze, Wiltshire

The heraldic blazon for the armorials of the St John family is: Argent, on a chief gules two mullets or. This can be translated as: a white shield with a red rectangle at the top holding two golden stars.

see above for further succession