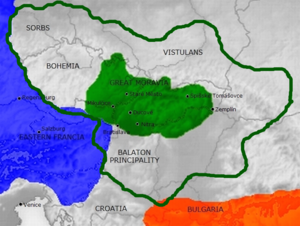 The Vistulans (Polish: Wiślanie) were an early medieval West Slavic tribe inhabiting western part of modern Lesser Poland.[1] In the 9th century, they created a tribal state, with probable major centers in Kraków, Wiślica, Sandomierz, and Stradów. Probably around 874 they were subjugated by king Svatopluk I of Moravia, who was a contemporary of the emperor Arnulf, and the Vistulan duke was forced to accept baptism. After a later period of Czech domination, the Vistulan lands became controlled by the Polans in the late tenth century, and were incorporated into Poland.

The area inhabited by the Vistulans probably ranged from the foothills of the Carpathian Mountains in the south, to the sources of the Pilica and Warta in the north. In the east, it reached the Dunajec, and in the west, the Skawa. The first Slavic gords were not built here until the mid 8th century, which means that the Vistulans probably frequently migrated, changing locations. Even though some historians, such as Przemysław Urbanczyk, claim that the Vistulans did not exist, there are three documents which can be tied to this tribe. First is the so-called Pannonian Legend (The Life of St. Methodius), second is the Bavarian Geographer, and third is Alfred the Great's Germania.

Since the 8th century, the Vistulans began construction of spacious gords, whose areas frequently reached over 10 hectares. Most gords were ring-shaped, and located on hills. Among major ones were the gords at Kraków, Stradów, Demblin, Naszczowice, Podegrodzie, Stawy, Trzcinica, Wiślica and on Bocheniec hill in Jadowniki. Most probably, the capital of the Vistulans was located in Kraków, which is confirmed by the size of the local gord, together with a fortified stronghold, located on the Wawel hill. Furthermore, the Vistulans probably built several mounds, such as the Krakus Mound, but historians argue whether these are of earlier, Celtic origin.

Little is known about early history of the Vistulans. Their territory might have been conquered by Greater Moravia, though no conclusive evidence exists to prove this theory. According to archaeological findings, in the late 9th century several gords in southern Lesser Poland were destroyed. This might have been during the conquest of the Vistulans by Great Moravia, but it might have been the result of a conflict between the Vistulans and other tribes, like the Golensizi. In the 950s, the land of the Vistulans was probably conquered by Czech Duke Boleslaus I, which is confirmed by Abraham ben Jacob, whose work was used by Muslim geographer al-Bakri in his Book of Roads and Kingdoms.

It is not known when and how the land of the Vistulans joined into the state of the Polans. Archaeological research has not found any evidence of armed conflicts between the Polans and the Vistulans. Most likely, Bolesław I Chrobry, future king of Poland, was named the ruler of Kraków by his grandfather, Boleslaus I. After the death of his father Mieszko I of Poland (992), Chrobry united Kraków with Poland, with the consent of the Vistulan ruling class.

So far historians have not been able to name any Vistulan dukes. Furthermore, little is known about their religious rituals and the date of baptism of the tribe.