Visual arts of Chicago refers to paintings, prints, illustrations, textile art, sculpture, ceramics and other visual artworks produced in Chicago or by people with a connection to Chicago. Since World War II, Chicago visual art has had a strong individualistic streak, little influenced by outside fashions. "One of the unique characteristics of Chicago," said Pennsylvania Academy of Fine Arts curator Bob Cozzolino, "is there's always been a very pronounced effort to not be derivative, to not follow the status quo."[1] The Chicago art world has been described as having "a stubborn sense ... of tolerant pluralism."[2] However, Chicago's art scene is "critically neglected."[3] Critic Andrew Patner has said, "Chicago's commitment to figurative painting, dating back to the post-War period, has often put it at odds with New York critics and dealers."[4] It is argued that Chicago art is rarely found in Chicago museums; some of the most remarkable Chicago artworks are found in other cities (such as the brilliantly warped epic drawings of Henry Darger at the American Folk Art Museum in New York, or Carlos Cortez' collection of early twentieth-century Chicago "Wobbly" (Industrial Workers of the World) woodcut prints, now in the Walter P. Reuther Library at Wayne State University in Detroit.[5]

Early days: before the War 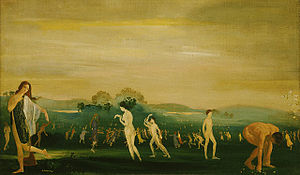 The School of the Art Institute of Chicago was founded in 1879, from the remains of an earlier school founded in 1866 (thus the school predates the museum of the same name).[6] Early students and faculty were conservative and derivative in their tastes, imitating popular European models. Arthur B. Davies, a former SAIC student and one of "the Eight" was considered a disappointment for being a member of a radical group of urban modernists. In 1913, SAIC students held a protest with costumes and bonfires against the Chicago showing of the Armory Show, a collection of the best new modern art; the newspapers described the students' activity as a riot.[7]

Only a year later the African-American realist Archibald J. Motley, graduated from the School of the Art Institute of Chicago; he kept his modern, jazz-influenced paintings secret for some years after.[8] 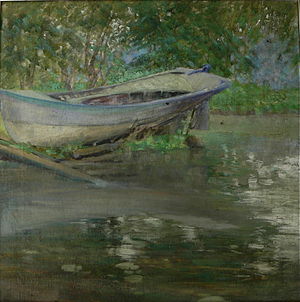 For many years the Art Institute of Chicago regularly held annual exhibits of local artists,[7] but these ended decades ago. Mary Agnes Yerkes, (1886–1989), was an American Impressionist painter and one such exhibitor at AIC from 1912-1915. Born in Oak Park, she studied at the Chicago Academy of Fine Arts, where she also taught, and the at the currently named School of the Art Institute of Chicago.[9] She is noted for her plein-air painting while camping the American West and its National Parks.

The time period between the World Wars witnessed an outpouring of artistic creativity in Chicago, led by artists of the calibre of Stanislav Szukalski, Todros Geller[10] and Albin Polasek.

The Chicago art scene was not strictly an all-boys club however; Sr. Maria Stanisia was able to overcome the patriarchal attitudes both within early twentieth century Chicago and the hierarchy of the Roman Catholic Church to become acclaimed as one of the greatest painters in the field of religious art.[11] Another woman artist Gertrude Abercrombie who like Stanisia attended the School of the Art Institute of Chicago, sold her surrealist paintings in art fairs that took place near the Art Institute of Chicago.[12]

Early evidence of Chicago's unique style came with Ivan Albright, with his "excruciatingly detailed surfaces depicting things in states of decay."[13] Eldzier Cortor documented African-American life for the WPA.[3] Vera Berdich, an influential surrealist printmaker, taught many future Chicago Imagists at the School of the Art Institute of Chicago.[13]

Claes Oldenburg was born in Sweden and only spent a few years in the 1950s in Chicago, but he sold his first works here, 5 pieces at the 57th Street Art Fair for $25.[14]

In the late 1960s, a group of former students of the School of the Art Institute of Chicago, many of whom had been mentored by teacher-artist Ray Yoshida,[15] organized a series of exhibits at the Hyde Park Art Center. Their art was notable for its surrealism and cartoon-influenced grotesques.

Strictly speaking, they were three different groups: The earliest was the "Monster Roster", which included Cosmo Campoli, Leon Golub, Nancy Spero, and Karl Wirsum; then the "Hairy Who", which included Art Green, Gladys Nilsson, and Jim Nutt; and finally the Chicago Imagists, which included Roger Brown, Ed Paschke, and Barbara Rossi.[3]

According to Imagist Ed Paschke, the Imagists felt liberated by a lack of critical coverage. "There was a sense that no one much cared what we did here. We weren't going to get a whole lot of national attention. We could do what we wanted to do."[13] After Paschke's death, in 2004, a New York critic infamously said that Paschke's "contribution to the art of his time was somewhat obscured by his distance from New York."[16] At that same time, Chicago artists Tony Fitzpatrick and Wesley Kimler and art consultant Paul Klein stirred outrage when they reported that not a single Chicago museum had any of Paschke's work on display (a claim that was later disputed).[17]

In 1972 the Chicago Imagists were given recognition in a show at the Museum of Contemporary Art.[18]

Under the leadership of Penelope and Franklin Rosemont, the Chicago Surrealist Group came together with both artistic and political ideals.[19] In 1976 the group played a major role in organizing the World Surrealist Exhibition at the Gallery Black Swan.[20]

Chicago produced several photorealists, including Arne Besser, and Richard Estes. Many photorealists were collected by Morton Neumann "against the grain of the prevailing critical thought at the time" (which espoused abstract expressionism), and exhibited at Chicago's Terra Museum of American Art.[21]

Over the last few decades, many contemporary Chicago artists have become internationally successful. A persistent problem for the development of art scenes in Chicago has been the fact that, in the past, a large number of artists began in Chicago, but had to relocate elsewhere before gaining attention. Curator Robert Cozzolino sees this positively, stating that we must "recognize a powerful Chicago diaspora." Such artists include Claes Oldenburg, Elizabeth Murray, Richard Estes, Robert Indiana, Joan Mitchell, Georgia O'Keeffe, Mark Staff Brandl and many others.[22] 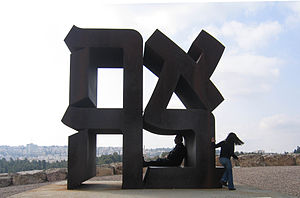 Although no overarching theme or style characterizes Chicago's contemporary art, many contemporary critics contend that institutional support has favored Neo-Conceptual work almost to exclusion. Chicago art is nevertheless diverse and pluralistic, as is art in general. Contemporary Chicago artists continue to explore personal styles. Although abstraction has never been as strong in Chicago as in New York, there are noteworthy Chicago abstract artists, such as William Conger, who paints brightly colored, sprightly designs, and Rodney Carswell, whose work is more formal and cooler; and conceptual artists such as photographer Jeanne Dunning and installation artist Kay Rosen.[23] Chicago's other notable contemporary artists are too numerous to name; but a few who would make any list are Kerry James Marshall, Dan Peterman, Gregg Bordowitz, Julia Fish, Wesley Kimler, Tony Fitzpatrick and Iñigo Manglano-Ovalle. 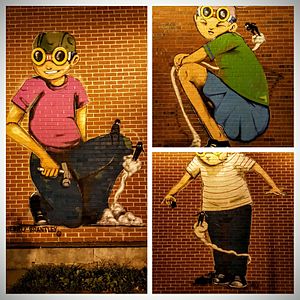 Chicago had a revival, dating to the 1960s, of public mural art, involving local artists and community members.[36] Chicago Public Art Group is a non profit cultural organization in Chicago that organizes and promotes creation of community public art. Founded in 1971, several of its recent works have been large bricolage mosaics in city underpasses.[37][38]

Today, Jeff Zimmerman paints photorealistic portrait murals, which can be found in various neighborhoods and restaurants in Chicago and Cincinnati.[39] 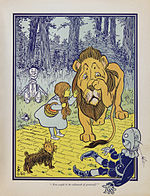 W. W. Denslow's illustration of The Wonderful Wizard of Oz. 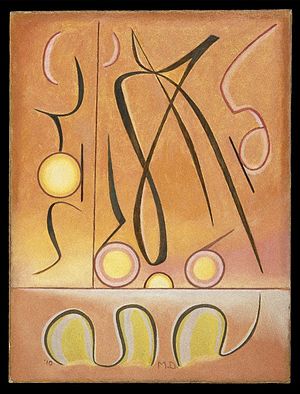 "Chicago emerged early on as an outpost for outsider art," according to critic Andrew Patner.[4]

Manierre Dawson was an early self-taught artist, who began painting abstracts in 1910. He was invited to display in the Armory Show.[13]

In the 1990s, a group of Chicago collectors, including Bob Roth, founder of the Chicago Reader, and Ann Nathan and Judy Saslow, both of whom have opened acclaimed galleries, organized Intuit: The Center for Intuitive and Outsider Art, which leads tours of Midwestern self-taught artists and has its own exhibition space.[4]

Paul Waggoner, an eccentric himself, was an art dealer and champion of outsider art.[47]

In the 1980s, the Museum of Contemporary Art, along with the Art Institute of Chicago and Chicago's Department of Cultural Affairs, attempted to put on a show of contemporary Chicago art. Called "The Chicago Show", it was supposed to celebrate Chicago's artistic diversity. Embarrassingly, 84 of the 90 artists chosen by the 5-member blind jury were found to be white. The organizers published an apology in the exhibit catalogue and invited twenty minority artists who had not been juried in to participate. Half of the invited artists, angered by this condescension, refused and organized a counter-exhibit at the Chicago Cultural Center.[3]

On April 15, 1989, the same night that the Hyde Park Art Center celebrated its 50th anniversary, a devastating fire destroyed most of an entire block of important galleries and art spaces in the River North gallery district.[4]

In spring of 1996, the Feigen, Inc. gallery's exhibit of Gregory Green's "10,000 Doses" and "Recipe for Making 'LSD' in the Kitchen" was raided by the Chicago police, who confiscated and broke open the artworks. No drugs were found.[4]

In 1996 the Museum of Contemporary Art, to get over the embarrassment of "The Chicago Show", attempted a survey of Chicago Art called "Art in Chicago: 1945-1995". It was criticized by the press as cramped, inadequate, and incomprehensive.[3][5] Its catalogue was judged a disappointment by Dennis Adrian, an art critic and participant, who called it "visually ... an atrocity of staggering proportions."[49]

In the last decade, all major print publications in Chicago have ceased seriously covering the visual arts . In 2009, the Chicago Reader, an alternative weekly newspaper, reduced its formerly complete art listings of galleries and museums and regular art reviews by Fred Camper to "a smattering of listings and pictures".[50] The Chicago Tribune, one of Chicago's two major newspapers, never had gallery or art listings and fired its sole dedicated fine arts reporter, Alan G. Artner, in 2009.[17] And the Chicago Sun-Times, the other of Chicago's two major newspapers, has no gallery or art listings and no dedicated arts reporter, although Kevin Nance has covered some fine art issues along with movies and popular culture.

Additionally, The New Art Examiner (from Chicago) and Dialogue magazine (Columbus, Ohio) reported on Chicago and midwestern arts communities until they both folded in 2002. Chicago Gallery News, a glossy color magazine published three times a year, lists gallery shows but has no articles. Gallery Guide magazine publishes a Chicago/midwest edition which is similar.

However, smaller online and print publications have continued to cover the art scene in Chicago and have increased dramatically in number in recent years. Since 1988, New City Magazine has covered the visual arts in Chicago, joined in the 1990s by Lumpen Magazine.[citation needed]. Gapers Block,[51] a Chicago-focused web publication established in 2003, added coverage with their arts and culture section. They were soon followed by Paul Klein's Art Letter[52] in 2004 and the Bad At Sports podcast and blog in 2005. In 2008, print-based Proximity Magazine[53] was established, joined by two more print publications, Jettison Quarterly,[54] and The School of the Art Institute's F News Magazine[55] in 2009. Also in 2009, Chicago Art Magazine broke off of Art Talk Chicago, part of the Chicago Tribune-sponsored blog network, to start their own independent online platform.[56] Chicago Art Review, which ran from 2009-2011 and is currently in hiatus, began in 2009 as well.[57] In 2010, Sixty Inches From Center was established and includes The Chicago Arts Archive, a web publication focusing on visual art in Chicago.[58]

Additionally, Chicago Artists Resource, launched by the Department of Cultural Affairs in 2005, provides articles on visual art in addition to providing resources and tools for Chicago artists.