Vitellius (Latin: Aulus Vitellius Germanicus Augustus;[1] 24 September 15 – 22 December 69) was Roman Emperor for eight months, from 16 April to 22 December 69. Vitellius was proclaimed emperor following the quick succession of the previous emperors Galba and Otho, in a year of civil war known as the Year of the Four Emperors.

Vitellius was the first to add the honorific cognomen Germanicus to his name instead of Caesar upon his accession; the latter name had fallen into disrepute in many quarters because of the actions of Nero.

His claim to the throne was soon challenged by legions stationed in the eastern provinces, who proclaimed their commander Vespasian emperor instead. War ensued, leading to a crushing defeat for Vitellius at the Second Battle of Bedriacum in northern Italy. Once he realised his support was wavering, Vitellius prepared to abdicate in favor of Vespasian but was executed in Rome by Vespasian's soldiers on 22 December 69.

He was the son of Lucius Vitellius Veteris and his wife Sextilia, and had one brother, Lucius Vitellius the Younger. Suetonius recorded two different accounts of the origins of the Vitellia (gens), one making them descendants of past rulers of Latium, the other describing their origins as lowly.[2]

Suetonius makes the sensible remark that both accounts might have been made by either flatterers or enemies of Vitellius—except that both were in circulation before Vitellius became emperor.[2] Suetonius also recorded that when Vitellius was born his horoscope so horrified his parents that his father tried to prevent Aulus from becoming a consul.[3]

He married firstly before the year 40 a woman named Petronia, daughter of Publius Petronius or Gaius Petronius Pontius Nigrinus, by whom he had a son Aulus Vitellius Petronianus, the universal heir of his mother and grandfather, whom he[who?] had killed in 69 in order to inherit his fortune.

He married secondly, around the year 50, a woman named Galeria Fundana, perhaps the granddaughter of Gaius Galerius, Prefect of Egypt in 23. They had two children, a son called Aulus Vitellius Germanicus or Novis, the Younger, and a daughter, Vitellia, who married the Legatus Decimus Valerius Asiaticus.

He was Consul in 48, and assumed Proconsul of Africa in either 60 or 61, in which capacity he is said to have acquitted himself with credit. At the end of 68, Galba, to the general astonishment, selected him to command the army of Germania Inferior, and here Vitellius made himself popular with his subalterns and with the soldiers by outrageous prodigality and excessive good nature, which soon proved fatal to order and discipline.

He owed his elevation to the throne to Caecina and Fabius Valens, commanders of two legions on the Rhine. Through these two men a military revolution was speedily accomplished; they refused to renew their vows of allegiance to Emperor Galba on 1 January 69, and early in 69 Vitellius was proclaimed emperor at Cologne. More accurately, he was proclaimed Emperor of the armies of Germania Inferior and Superior. The armies of Gaul, Brittania and Raetia sided with them shortly afterwards. By the time that they marched on Rome, however, it was Otho, and not Galba, whom they had to confront.

In fact, he was never acknowledged as Emperor by the entire Roman world, though at Rome the Senate accepted him and decreed to him the usual Imperial honours. He advanced into Italy at the head of a licentious and rough soldiery, and Rome became the scene of riot and massacre, gladiatorial shows and extravagant feasting. To reward his victorious legionaries, Vitellius disbanded the existing Praetorian Guard and installed his own men instead. 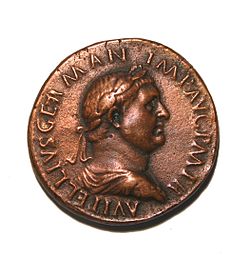 Vitellius on a coin.

Suetonius, whose father had fought for Otho at Bedriacum, gives an unfavourable account of Vitellius' brief administration: he describes him as unambitious and notes that Vitellius showed indications of a desire to govern wisely, but that Valens and Caecina encouraged him in a course of vicious excesses which threw his better qualities into the background. Vitellius is described as lazy and self-indulgent, fond of eating and drinking, and an obese glutton, eating banquets four times a day and feasting on rare foods he would send the Roman navy to procure.

For these banquets, he had himself invited over to a different noble's house for each one. He is even reported to have starved his own mother to death—to fulfill a prophecy that he would rule longer if his mother died first; alternatively there is a report that his mother asked for poison to commit suicide-a request he granted.[4] Other writers, namely Tacitus and Cassius Dio, disagree with some of Suetonius' assertions, even though their own accounts of Vitellius are scarcely positive ones.

Despite his short reign he made two important contributions to Roman government which outlasted him. Tacitus describes them both in his Histories:

Vitellius also banned astrologers from Rome and Italy in 1 October, 69. Some astrologers responded to his decree by anonymously publishing a decree of their own: "Decreed by all astrologers in blessing on our State Vitellius will be no more on the appointed date." In response, Vitellius executed any astrologers he came across.[5]

Tacitus' Histories state that Vitellius awaited Vespasian's army at Mevania. The terms of resignation had actually been agreed upon with Marcus Antonius Primus, the commander of the sixth legion serving in Pannonia and one of Vespasian’s chief supporters, but the praetorians refused to allow him to carry out the agreement, and forced him to return to the palace, when he was on his way to deposit the insignia of empire in the Temple of Concord.

On the entrance of Vespasian's troops into Rome he was dragged out of a hiding-place (according to Tacitus a door-keeper's lodge), driven to the fatal Gemonian stairs, and there struck down. "Yet I was once your emperor," were his last words. His body was thrown into the Tiber according to Suetonius; Cassius Dio's account is that Vitellius was beheaded and his head paraded around Rome, and his wife attended to his burial. His brother and son were also killed.

Suetonius in writing of Vitellius execution describes his physical description: "..He was in fact abnormally tall, with a face usually flushed from hard drinking, a huge belly, and one thigh crippled from being struck once time by a four-horse chariot, when he was in attendance on Gaius as he was driving...".[6]

Years before there was a prediction that he would fall into the power of a man from Gaul; the man who slayed him was Antonius Primus of Tolosa and whose surname was Becco which means "Roosters beak" {Gallus means both "a cock" and "a Gaul"}.[7]

Vitellius is also shown in the painting Decadence of the Romans by Thomas Couture.

Decadence of the Romans.