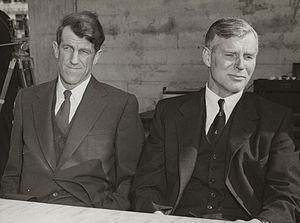 Sir Vivian Fuchs (right) pictured with Sir Edmund Hillary in Wellington after the return of the Commonwealth Trans-Antarctic Expedition, 1958.

Fuchs was the son of the German immigrant Ernst Fuchs from Jena and of his British wife Violet Watson. He was born in 1908 in Freshwater, Isle of Wight, and attended Brighton College and St John's College, Cambridge. He was educated as a geologist, and considered the profession a means of pursuing his interest in the outdoors. His first expedition was to Greenland in 1929 with his tutor James Wordie. After graduation in 1930, he travelled with a Cambridge University expedition to study the geology of East African lakes with respect to climate fluctuation. Next, he joined anthropologist Louis Leakey on an expedition to Olduvai Gorge. In 1933, Fuchs married his cousin, Joyce Connell. A world traveller in her own right, Joyce accompanied Vivian on his expedition to Lake Rudolf (now Lake Turkana) in 1934. The findings from this expedition, in which two of their companions were lost, brought Fuchs his PhD from Cambridge in 1937.

In February 1936, his daughter Hilary was born. Fuchs organised an expedition to investigate the Lake Rukwa basin in southern Tanzania in 1937. He returned in 1938 to find that his second daughter, Rosalind, had severe cerebral palsy. Rosalind died in 1945. His son, Peter, was born in 1940.

At the age of thirty, he enrolled in the Territorial Army, and was dispatched to the Gold Coast from 1942 to July 1943. He returned home and was posted to London at Second Army headquarters in a civil affairs position. The Second Army was transferred to Portsmouth for the D-Day landings, and Fuchs eventually reached Germany in time to see the release of prisoners from the Belsen concentration camp. He governed the Plön district in Schleswig-Holstein until October 1946, when he was discharged from military service with the rank of Major.

Fuchs was involved with the Falkland Islands Dependencies Survey (now the British Antarctic Survey) beginning in 1947, when he applied for a geologist position. The organisation's goal was to promote Britain's claims to Antarctica, and secondarily to support scientific research. In 1950 Fuchs was asked to develop the new London scientific bureau of the Survey, to plan research in the Antarctic and support research publication. He would eventually become director of the Falkland Islands Dependencies Survey, from 1958 (after his return from the successful Antarctic expedition) until 1973. His wife died in Oxford in 1990 of a heart attack, aged 83. The next year, he married Eleanor Honnywill, his former personal assistant at the British Antarctic Survey, in Kensington and Chelsea, London. Sir Vivian Fuchs died in Cambridge[2] on 11 November 1999, aged 91.

Fuchs is best known as the leader of the Commonwealth Trans-Antarctic Expedition, a Commonwealth-sponsored expedition that completed the first overland crossing of Antarctica. Planning for the expedition began in 1953, and envisioned the use of Sno-Cat tractors to cross the continent in 100 days, starting at the Weddell Sea, ending at the Ross Sea, and crossing the South Pole.

Fuchs and his party arrived in Antarctica in January 1957 after camp had been set up. The party departed from Shackleton Base on 24 November 1957. During the trek, a variety of scientific data were collected from seismic soundings and gravimetric readings. Scientists established the thickness of ice at the pole, and the existence of a land mass beneath the ice. On 2 March 1958, Fuchs and company completed the 100-day trip by reaching Scott Base, having travelled 2,158 miles.

In 1958, he was knighted by Queen Elizabeth II. He co-wrote, with Sir Edmund Hillary, The Crossing of Antarctica.

The Fuchs Medal was created in 1973 for "Outstanding devotion to the British Antarctic Survey's interests, beyond the call of normal duty, by men or women who are or were members of the Survey, or closely connected with its work."

The medal is awarded to 1 or 2 people per year for their contribution to the British Antarctic Survey.