He was the son of Vsevolod I (married in 1046) and Anastasia, daughter of the Byzantine emperor Constantine IX Monomachos, from whom Vladimir obtained his surname.[1] Contemporary Byzantine naming practice allowed the adoption of a maternal surname if the mother's family was perceived to be of a more exalted origin than that of the father.[2]

Eupraxia of Kiev, a half-sister of Vladimir, became notorious all over Europe for her divorce from the Holy Roman Emperor Henry IV on the grounds that he had attempted a black mass on her naked body. 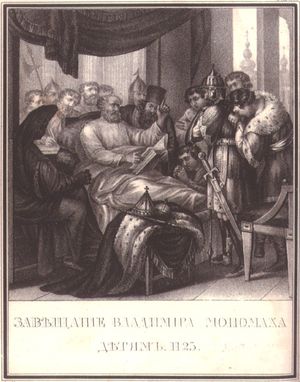 The Testament of Vladimir Monomakh to Children, 1125. Lithography of 1836.

In his famous Instruction (also known as The Testament) to his own children, Monomakh mentions that he conducted 83 military campaigns and 19 times made peace with the Polovtsi. At first he waged war against the steppe jointly with his cousin Oleg, but after Vladimir was sent by his father to rule Chernigov and Oleg made peace with the Polovtsi to retake that city from him, they parted company. Since that time, Vladimir and Oleg were bitter enemies who would often engage in internecine wars. The enmity continued among their children and more distant posterity.

From 1094, his chief patrimony was the southern town of Pereyaslav, although he also controlled Rostov, Suzdal, and other northern provinces (see Principality of Pereyaslavl). In these lands he founded several towns, notably his namesake, Vladimir, the future capital of Russia. In order to unite the princes of Rus' in their struggle against the Great Steppe, Vladimir initiated three princely congresses, the most important being held at Lyubech in 1097 and Dolobsk in 1103.

In 1107 he defeated Boniak, a Cuman khan who led an invasions on Kievan Rus'. When Sviatopolk II died in 1113, the Kievan populace revolted and summoned Vladimir to the capital. The same year he entered Kiev to the great delight of the crowd and reigned there until his death in 1125. As may be seen from his Instruction, he promulgated a number of reforms in order to allay the social tensions in the capital. These years saw the last flowering of Ancient Rus, which was torn apart 10 years after his death.

Vladimir Monomakh is buried in the Saint Sophia Cathedral in Kiev. Succeeding generations often referred to his reign as the golden age of that city. Numerous legends are connected with Monomakh's name, including the transfer from Constantinople to Rus of such precious relics as the Theotokos of Vladimir and the Vladimir/Muscovite crown called Monomakh's Cap.

The following daughter has been attributed to both the first and the second wife:

The second wife, Eufimia, is considered to have been a Byzantine noblewoman. The Primary Chronicle and "Testament of Vladimir Monomakh" record her date of death on 7 May 1107. However the Chronicle does not mention her name. They had at least six children:

His third marriage is thought to have been to a daughter of Aepa Ocenevich, Khan of the Cumans. Her paternal grandfather was Osen. Her people belonged to the Kipchaks, a confederation of pastoralists and warriors of Turkic origin.

However the Primary Chronicle identifies Aepa as father-in-law to Yuri Dolgoruki. With Vladimir negotiating the marriage in name of his son. Whether father and son married sisters or the identity of intended groom was misidentified is unclear.