Vladimir's father was prince Sviatoslav of the Rurik dynasty.[6] After the death of his father in 972, Vladimir, who was then prince of Novgorod, was forced to flee to Scandinavia in 976 after his brother Yaropolk had murdered his other brother Oleg and conquered Rus'. In Sweden, with the help from his relative Ladejarl Håkon Sigurdsson, ruler of Norway, he assembled a Varangian army and reconquered Novgorod from Yaropolk.[7] By 980 Vladimir had consolidated the Kievan realm from modern-day Ukraine to the Baltic Sea and had solidified the frontiers against incursions of Bulgarian, Baltic, and Eastern nomads. Originally a follower of Slavic paganism, Vladimir converted to Christianity in 988[8][9][10] and Christianized the Kievan Rus'.[11]

Born in 958, Vladimir was the natural son and youngest son of Sviatoslav I of Kiev by his housekeeper Malusha. Malusha is described in the Norse sagas as a prophetess who lived to the age of 100 and was brought from her cave to the palace to predict the future. Malusha's brother Dobrynya was Vladimir's tutor and most trusted advisor. Hagiographic tradition of dubious authenticity also connects his childhood with the name of his grandmother, Olga Prekrasa, who was Christian and governed the capital during Sviatoslav's frequent military campaigns. His place of birth is identified by different authors either as Budyatychi (modern Volyn Oblast, Ukraine)[1] or Budnik (modern Pskov Oblast, Russia).[2]

Transferring his capital to Pereyaslavets in 969, Sviatoslav designated Vladimir ruler of Novgorod the Great but gave Kiev to his legitimate son Yaropolk. After Sviatoslav's death in 972, a fratricidal war erupted in 976 between Yaropolk and his younger brother Oleg, ruler of the Drevlians. In 977 Vladimir fled to his kinsman Haakon Sigurdsson, ruler of Norway, collecting as many Norse warriors as he could to assist him to recover Novgorod. On his return the next year, he marched against Yaropolk. On his way to Kiev he sent ambassadors to Rogvolod (Norse: Ragnvald), prince of Polotsk, to sue for the hand of his daughter Rogneda (Norse: Ragnhild). The high-born princess refused to affiance herself to the son of a bondswoman, so Vladimir attacked Polotsk, slew Rogvolod, and took Ragnhild by force. Polotsk was a key fortress on the way to Kiev, and capturing Polotsk and Smolensk facilitated the taking of Kiev in 978, where he slew Yaropolk by treachery and was proclaimed knyaz of all Kievan Rus.[12]

Vladimir continued to expand his territories beyond his father's extensive domain. In 981, he seized the Cherven towns from the Poles; in 981-982 he suppressed a Vyatichi rebellion; in 983, he subdued the Yatvingians; in 984, he conquered the Radimichs; and in 985, he conducted a military campaign against the Volga Bulgars,[13][14] planting numerous fortresses and colonies on his way.

Although Christianity spread in the region under Oleg's rule, Vladimir had remained a thoroughgoing pagan, taking eight hundred concubines (along with numerous wives) and erecting pagan statues and shrines to gods.[15] He may have attempted to reform Slavic paganism by establishing the thunder-god, Perun, as a supreme deity.[citation needed]

Open abuse of the deities that most people in Rus' revered triggered widespread indignation. A mob killed the Christian Fyodor and his son Ioann (later, after the overall christening of Kievan Rus, people came to regard these two as the first Christian martyrs in Rus', and the Orthodox Church set a day to commemorate them, July 25). Immediately after the murder of Fyodor and Ioann, early medieval Rus' saw persecutions against Christians, many of whom escaped or concealed their belief.[16]

However, Prince Vladimir mused over the incident long after, and not least for political considerations. According to the early Slavic chronicle called Tale of Bygone Years, which describes life in Kyivan Rus' up to the year 1110, he sent his envoys throughout the civilized world to judge first hand the major religions of the time, Islam, Roman Catholicism, Judaism, and Byzantine Orthodoxy. They were most impressed with their visit to Constantinople, saying, "We knew not whether we were in Heaven or on Earth… We only know that God dwells there among the people, and their service is fairer than the ceremonies of other nations."[17]

Christianization of the Kievan Rus' 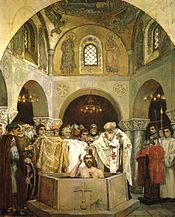 The Baptism of Saint Prince Vladimir, by Viktor Vasnetsov (1890)

The Primary Chronicle reports that in the year 987, after consultation with his boyars, Vladimir the Great sent envoys to study the religions of the various neighboring nations whose representatives had been urging him to embrace their respective faiths. The result is described by the chronicler Nestor. Of the Muslim Bulgarians of the Volga the envoys reported there is no gladness among them, only sorrow and a great stench. He also reported that Islam was undesirable due to its taboo against alcoholic beverages and pork.[18] Vladimir remarked on the occasion: "Drinking is the joy of all Rus'. We cannot exist without that pleasure."[19] Ukrainian and Russian sources also describe Vladimir consulting with Jewish envoys and questioning them about their religion, but ultimately rejecting it as well, saying that their loss of Jerusalem was evidence that they had been abandoned by God. His emissaries also visited Roman Catholic and Orthodox missionaries.[citation needed] Ultimately Vladimir settled on Eastern Orthodox Christianity. In the churches of the Germans his emissaries saw no beauty; but at Constantinople, where the full festival ritual of the Byzantine Church was set in motion to impress them, they found their ideal: "We no longer knew whether we were in heaven or on earth," they reported, describing a majestic Divine Liturgy in Hagia Sophia, "nor such beauty, and we know not how to tell of it." If Vladimir was impressed by this account of his envoys, he was even more attracted by the political gains of the Byzantine alliance. 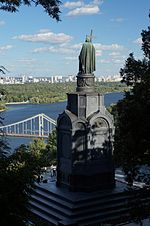 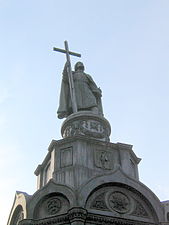 Saint Vladimir Monument on Volodymyrska Hill in Kiev, often depicted in paintings and photographs of the city

In 988, having taken the town of Chersonesos in Crimea, he boldly negotiated for the hand of emperor Basil II's sister, Anna.[20] Never before had a Byzantine imperial princess, and one "born in the purple" at that, married a barbarian, as matrimonial offers of French kings and German emperors had been peremptorily rejected. In short, to marry the 27-year-old princess to a pagan Slav seemed impossible. Vladimir was baptized at Chersonesos, however, taking the Christian name of Basil out of compliment to his imperial brother-in-law; the sacrament was followed by his wedding to Anna. Returning to Kiev in triumph, he destroyed pagan monuments and established many churches, starting with a church dedicated to St. Basil,[21] and the Church of the Tithes (989).

Arab sources, both Muslim and Christian, present a different story of Vladimir's conversion. Yahya of Antioch, al-Rudhrawari, al-Makin, Al-Dimashqi, and ibn al-Athir all give essentially the same account.[22] In 987, Bardas Sclerus and Bardas Phocas revolted against the Byzantine emperor Basil II. Both rebels briefly joined forces, but then Bardas Phocas proclaimed himself emperor on 14 September 987. Basil II turned to the Kievan Rus' for assistance, even though they were considered enemies at that time. Vladimir agreed, in exchange for a marital tie; he also agreed to accept Christianity as his religion and to Christianize his people. When the wedding arrangements were settled, Vladimir dispatched 6,000 troops to the Byzantine Empire, and they helped to put down the revolt.[23] 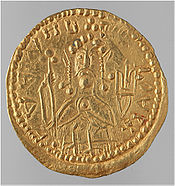 Vladimir then formed a great council out of his boyars and set his twelve sons over his subject principalities. According to the Primary Chronicle, he founded the city of Belgorod in 991. In 992 he went on a campaign against the Croats, most likely the White Croats that lived on the border of modern Ukraine. This campaign was cut short by the attacks of the Pechenegs on and around Kiev.

In his later years he lived in a relative peace with his other neighbors: Boleslav I of Poland, Stephen I of Hungary, and Andrikh the Czech (questionable character mentioned in A Tale of the Bygone Years). After Anna's death, he married again, likely to a granddaughter of Otto the Great.

In 1014 his son Yaroslav the Wise stopped paying tribute. Vladimir decided to chastise the insolence of his son and began gathering troops against him. Vladimir fell ill, however, most likely of old age, and died at Berestovo, near Kiev. The various parts of his dismembered body were distributed among his numerous sacred foundations and were venerated as relics.

Main article: Family life and children of Vladimir I 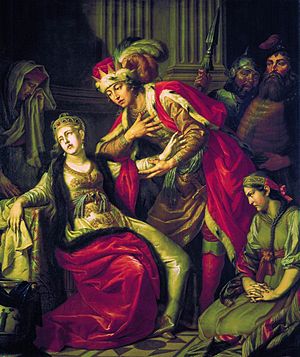 The fate of all Vladimir's daughters, whose number is around nine, is uncertain. 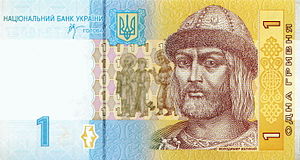 Vladimir the Great portrait on obverse ₴1 bill circa 2006

The Roman Catholic and Eastern Orthodox churches celebrate the feast day of St. Vladimir on 15 July.

The town Volodymyr-Volynskyi in north-western Ukraine was founded by Vladimir and is named after him.[24] The foundation of another town, Vladimir in Russia, is usually attributed to Vladimir Monomakh. However some researchers argue that it was also founded by Vladimir the Great.[25]

St Volodymyr's Cathedral, one of the largest cathedrals in Kiev, is dedicated to Vladimir the Great, as was originally the University of Kiev. The Imperial Russian Order of St. Vladimir and Saint Vladimir's Orthodox Theological Seminary in the United States are also named after him.

The memory of Vladimir was also kept alive by innumerable Russian folk ballads and legends, which refer to him as Krasno Solnyshko (the Fair Sun). The Varangian period of Eastern Slavic history ceases with Vladimir, and the Christian period begins. The appropriation of Kievan Rus' as part of national history has also been a topic of contention in Ukrainophile vs. Russophile schools of historiography since the Soviet era.