From Infogalactic: the planetary knowledge core
Jump to: navigation, search
For other uses of "Flushing", see Flushing (disambiguation).

listen); Zeelandic: Vlissienge; historical name in English: Flushing) is a municipality and a city in the southwestern Netherlands on the former island of Walcheren. With its strategic location between the Scheldt river and the North Sea, Vlissingen has been an important harbour for centuries. It was granted city rights in 1315. In the 17th century Vlissingen was a main harbour for ships of the Dutch East India Company (VOC). It is also known as the birthplace of Admiral Michiel de Ruyter.

Vlissingen is mainly noted for the yards on the Scheldt where most of the ships of the Royal Netherlands Navy (Koninklijke Marine) are built.

The municipality of Vlissingen consists of the following places: 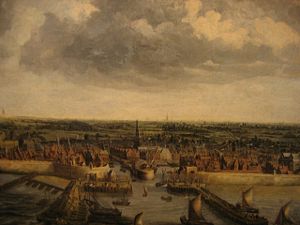 The Arrival at Vlissingen of Frederick V, Elector Palatine, by Hendrick Cornelisz Vroom, oil on canvas.

The fishermen’s hamlet that came into existence at the estuary of the Schelde around AD 620 has grown over its 1,400-year history into the third-most important port of the Netherlands. The Counts of Holland, Flanders, and Zeeland had the first harbours dug. Over the centuries, Vlissingen developed into a hub for fishing, especially the herring fishery, commerce, privateering and the slave trade. During the heyday of the Dutch Golden Age, ships from Vlissingen set sail for the various outposts of the Dutch colonial empire and contributed to the world power of The Seven Provinces.

The history of Vlissingen was also marked by invasion, oppression and bombardments. Because of its strategic position at the mouth of the Schelde, the most important passageway to Antwerp, it has attracted the interest, at one time or another, of the British, the French, the Germans and the Spanish. Floods have also been a constant threat. Vlissingen declined during the 18th century. The Napoleonic Wars were particularly disastrous. After 1870, the economy revived after the construction of new docks and the Walcheren canal, the arrival of the railway and the establishment of the shipyard called De Schelde. The Second World War interrupted this growth. The city was heavily damaged by shelling and inundation but was captured and liberated by British Commandos of 4th Special Service Brigade on 3 November 1944.

The city was rebuilt after the war. In the 1960s, the seaport and industrial area of Vlissingen-Oost developed and flourished. Now this area is the economic driving force behind central Zeeland, generating many thousands of jobs. Nowadays approx. 50,000 ships annually from all corners of the world pass through the Schelde. Tourists are attracted to Vlissingen not just because of its history and maritime character, but also because nowhere else in the world do large ships pass this close to shore.[5] 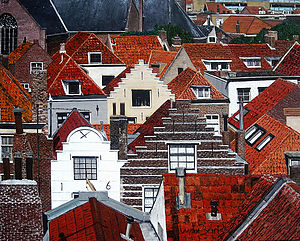 Vlissingen's seaside boulevard at the start of the 21st century.

The derivation of the name Vlissingen is unclear, though most scholars relate the name to the word fles (bottle) in one way or another.

According to one story, when saint Willibrord landed in Vlissingen with a bottle in the 7th century, he shared its contents with the beggars he found there while trying to convert them. A miracle occurred, familiar to readers of hagiography, when the contents of the bottle did not diminish. When the bishop realised the beggars did not want to listen to his words, he gave them his bottle. After that, he supposedly called the city Flessinghe.

Another source states that the name had its origins in an old ferry-service house, on which a bottle was attached by way of a sign. The monk Jacob van Dreischor, who visited the city in 967, then apparently called the ferry-house het veer aan de Flesse (the ferry at the Bottle). Because many cities in the region later received the appendix -inge, the name, according to this etymology, evolved to Vles-inge.

According to another source, the name was derived from the Danish word Vles, which means tides.

The eastern cape of Novaya Zemlya, Cape Flissingsky was named after the city in 1596 by Willem Barentsz.

Flushing, originally a Dutch colonial village founded in 1645 and now part of Queens, New York City, was first called Vlissingen after the town in the Netherlands. The English settlers who also came to live in the village[7] shortened the name to "Vlissing" by 1657 and then began to call it by its English name, Flushing, and this continued and grew after the conquest of New Netherland. The Anglicisation of "Vlissingen" into "Flushing" did not occur after the conquest of New Netherland, but in England well before then. This village was the site of the Flushing Remonstrance.

The village of Flushing in Cornwall was also named after Vlissingen. Originally named Nankersey, the village was given its name by Dutch engineers from Vlissingen in the Netherlands who built the three main quays in the village.

The use of "Flushing" as the English name of the town continues[8] as the correct English name. 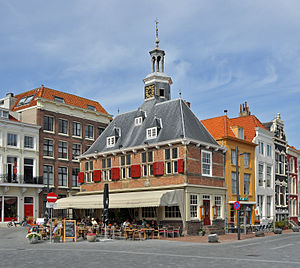 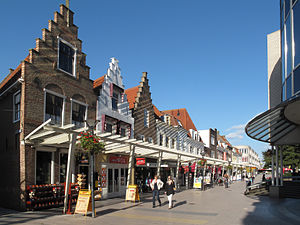 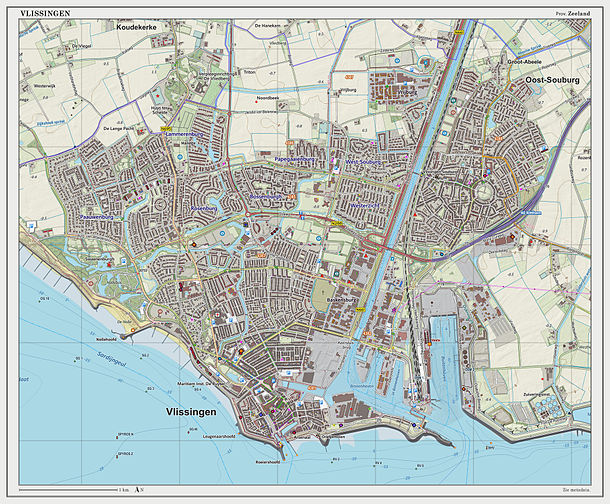 Vlissingen has a temperate oceanic climate (Köppen climate classification Cfb) that is milder than the rest of the Netherlands due to its more southern location on the coast.[9] It is one of the sunniest cities in the Netherlands, receiving approximately 180 more sunshine hours than Maastricht in the southeast.

A surprising number of Dutch admirals were born in Vlissingen. Among them are Michiel Adriaanszoon de Ruijter, Joost and Adriaen Banckert and the three admirals Cornelis Evertsen. See further People from Vlissingen.

The English poet and playwright Christopher Marlowe was arrested in Vlissingen for counterfeiting coins, and deported from there back to England on 26 January 1592. 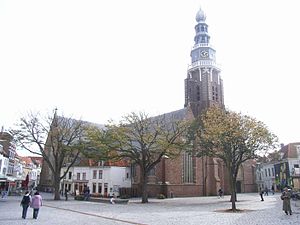