From Infogalactic: the planetary knowledge core
(Redirected from Vlora)
Jump to: navigation, search
This article is about the Albanian city. For the American company, see Valore (company).

Vlorë is a coastal town and municipality in southern Albania. It is the second largest port city of Albania, after Durrës. It is the city where the Albanian Declaration of Independence was proclaimed on November 28, 1912. Vlorë was for a brief time the Capital of Albania.

Founded as an ancient Greek colony in the 6th century BC by the name of Aulon and continuously inhabited for about 26 centuries, Vlorë is home to the Port of Vlorë and University of Vlorë as the most important economical and cultural city of southwestern Albania.

The modern name for the city is the Albanian form Vlorë or Vlora, both pronounced [ˈvlɔɾə], while in the Gheg dialect it is known as Vlonë.[4] Vlorë was created in antiquity as a Greek colony in the territory of Illyria. Its first name was Aulón (Greek: Αυλών, also the name in modern Katharevousa), meaning "channel" or "glen" and possibly a translation of another indigenous name.[5] The medieval and modern Greek name is Αυλώνας /av'lonas/, accusative Αυλώνα /av'lona/, and is the source of the Italian name Valona (also used in other languages) and of the obsolete English Avlona.[6][7] During the Ottoman era, the Turkish Avlonya was also used.[8] 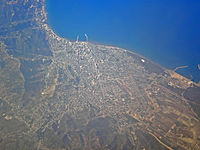 Aerial view of Vlorë pointing to the south.

The city is located in Southern Albania and is the municipal seat of Vlorë County.

Vlorë is situated on the Bay of Vlorë, an inlet on the Adriatic Sea, almost surrounded by mountains. The port of Vlorë is closer in proximity than any other to the port of Bari, Italy, and is just 70 nautical miles (130 km) from Salento's coasts. The island of Sazan is nearby, strategically located at the entrance to the Bay of Vlorë.

The town is surrounded by gardens and olive groves. Valonia, the mass name for acorn cups obtained in the neighboring oak forests and (because of its chemical derivatives) used by tanners, derives its name from Valona, the ancient name of Vlorë.

A new motorway is being constructed linking the city with Fier and Albania as a whole. One of the most panoramic routes of the Albanian Riviera starts to the south of town stretching up to Sarande in extreme southern Albania. 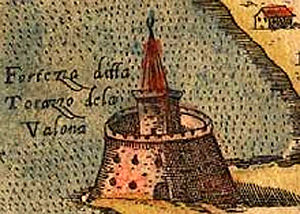 Vlorë is one of the oldest cities of Albania. It was founded by Ancient Greeks in the 6th century BC and named Aulōn, one of several colonies on the Illyrian coast,[9] mentioned for the first time by Ptolemy (Geographia, III, xii, 2). Other geographical documents, such as Peutinger's "Tabula" and the "Synecdemus" of Hierocles, also mention it. The city was an important port of the Roman Empire, when it was part of Epirus Nova.[10]

It became an episcopal see in the 5th century. Among the known bishops are Nazarius, in 458, and Soter, in 553 (Daniele Farlati, Illyricum sacrum, VII, 397–401). The diocese at that time belonged to the Patriarchate of Rome. In 733 it was annexed, with all eastern Illyricum, to the Ecumenical Patriarchate of Constantinople, and yet it is not mentioned in any Notitiae episcopatuum of that Church. The bishopric had probably been suppressed, for, though the Bulgarians had been in possession of this country for some time, Avlona is not mentioned in the "Notitiae episcopatuum" of the Patriarchate of Achrida. During the Latin domination, a Latin see was established, and Eubel (Hierarchia catholica medii aevi, I, 124) mentions several of its bishops. Several of the Latin bishops mentioned by Le Quien (Oriens christianus, III, 855-8), and whom Eubel (I, 541) mentions under the See of Valanea in Syria, belong either to Aulon in Greece (now Salona) or to this Aulon in Albania (Vlorë), which, no longer being a residential bishopric, is today listed by the Catholic Church as a titular see, a suffragan of Durrës, being distinguished from another titular see called Aulon by the use for it of the adjective Aulonitanus, while the adjective regarding the Aulon in Euboea is Aulonensis.[11]

Vlorë played a central role in the conflicts between the Norman Kingdom of Sicily and the Byzantine Empire during the 11th and 12th centuries. 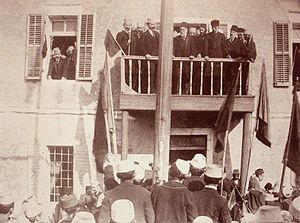 Albanian Declaration of Independence in 1912

After it was captured by the Ottoman Empire in 1417, it became a sanjak centre in Rumeli Eyaleti as "Avlonya"; and after coming under Venetian possession in 1690, the city was restored to the Turks in 1691, becoming a kaza of the sanjak of Berat in the vilayet (province) of Janina. The city had about 10,000 inhabitants; there was a Catholic parish, which belonged to the Roman Catholic Archdiocese of Durrës. In the 16th century, it was an important center for Sephardic Jewish refugees from Spain and Portugal.

In 1851 it suffered severely from an earthquake.[citation needed] 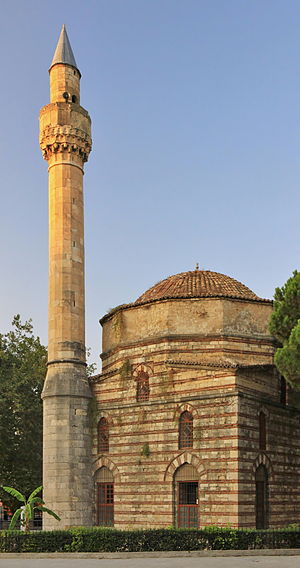 Ismail Qemali declared Albania's independence in Vlorë on November 28, 1912, during the First Balkan War. The city became Albania's first capital following its independence, but was invaded by Italy in 1914, during World War I. The city remained occupied by Italian forces until 1920, in which an Albanian rebellion forced the Italians out of Albania. Italy again invaded Vlorë in 1939. The city was under Italian occupation until Italy surrendered to the allies in 1943, following which Nazi Germany occupied the city until 1944. The city was liberated in 1944 by communist forces under Enver Hoxha.

During World War II, the island of Sazan in Bay of Vlorë became the site of a German and Italian submarine base and naval installations; these were heavily bombed by the Allies. 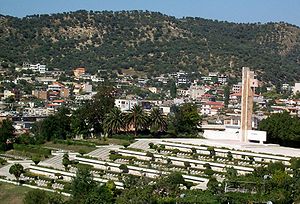 Cemetery of the Partisans

After WWII, under communist regime, the port was leased to the Soviet Union as a submarine base, and played an important part in the conflict between Enver Hoxha and Nikita Khrushchev in 1960–1961, as the Soviet Union had made considerable investments in the naval facilities at nearby Pasha Liman and objected strongly to the loss of them as a consequence of Albania denouncing the USSR as 'revisionist' and taking the Chinese side in the split in the world communist movement. The Soviet Union threatened to occupy Vlora with Soviet troops in April 1961, and cut off all Soviet economic, military and technical aid to Albania. The threat was not carried out, as a result of the simultaneous development of the Cuban missiles crisis, but Hoxha realized how vulnerable Albania was, and, after the USSR invaded Czechoslovakia in 1968, he built the hundreds of thousands of concrete bunkers that still litter the entire Albanian landscape. Under Hoxha, Vlorë was an important recruiting centre for the Sigurimi, the secret police.

In 1997, Vlorë was the center of popular riots after the collapse of several fraudulent investment schemes that led to the downfall of the Sali Berisha administration, and almost turned into a civil war.

Vlora is home of the second largest university in Albania. The University of Vlora Ismail Qemali (UV) was created in 1994 as a Technological University. It started with a few hundred students and today is the second biggest university in Albania with nearly 15 000 students. It retains a focus on technology, but has expanded in the areas of economics and finance, education, medicine, and law. UV is the leading research university in Albania. It is the most productive university in Albania in organizing research conferences, inviting researchers from leading institutions, and sending its own researchers abroad. Some of the more important areas of research are mathematics, computer science, and engineering. It has also active groups in Albanian literature, economics and finance, folk music and dance, education, etc. Vlora Conference Center is a leader in organizing conferences in Albania and has organized conferences yearly at the University of Vlora. Its board is composed of internationally known scientists.

There are three internationally known journals based in the University of Vlora . They are the highest quality journals of any Albanian speaking university.Albanian Journal of Mathematics, Albanian Journal of Mechanical Engineering There is also a scientific journal published quarterly in Albanian:Buletini Shkencor i Universitetit te Vlorës Since 2008 it gives home to the Academicus International Scientific Journal, a scientific publication in English language, peer-reviewed, founded by Arta Musaraj .[15] Many summer schools and training sessions are organized at the University. Vlora is a popular tourist destination and this makes it very attractive for organizing international conferences.

In addition, University of Vlora has excellent programs in naval engineering and navigation. Studying the Bay of Vlora has been one of the main projects of the navigation department in the last few years. The Bay of Vlora is an important place in world history with important events such as Caesar's battles, medieval times, World War I, and World War II, etc. In the bay is one of the oldest military naval bases in the world which continues to be used to this day. The Naval Base of Pashaliman was the only Russian base in the Mediterranean in the 1950s, and was the hot spot of conflict between the Russians and the Albanians in 1961 when Albania pulled out of the Warsaw Treaty. The Department of Navigation is mapping all the ships sunk in the bay area, and is doing research in the area of marine archeology in the ancient town of Orikum (Oricum).

Researchers from UV participate in congresses and conferences all over the world. UV has joint projects and exchange programs with some of the best universities in the world and very actively is trying to expand further such programs. UV has taken the lead in all Albanian institutions to increase active cooperation with western universities and to have research as its first priority.

Besides the state university there are two private universities: Universiteti Pavarësia Vlorë, established in 2009; and Akademia e Studimeve të Aplikuara "Reald", which started as primary school and high school, and since 2011 operates also as a university.[16] 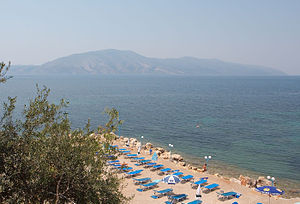 Beach in Radhimë south of Vlora 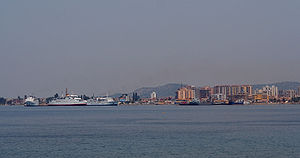 Vlorë remains a major seaport and commercial centre, with a significant fishing and industrial sector. The surrounding region produces petroleum, natural gas, bitumen and salt. The city is also the location of important installations of the Albanian Navy.

Vlorë has grown in importance as an agricultural center with very large-scale planting of olive and fruit trees, and as a center of the food processing, oil and bitumen export industries.

Tourism has become a major industry in recent years, with many hotels, recreational centers, and vast beaches. It is a pleasant place to relax, to have a coffee and admire the beautiful view over the Bay of Vlorë.

TEDA Vlora has a strategic location – 151 km away from the capital Tirana, is part of Corridor 8 and adjacent to the Adriatic-Ionian Highway. It has direct exchange with SH8 Highway, 4.6 km away. Tirana International Airport “Nënë Tereza” is only 147 km away from TEDA Vlora and is suitable for transportation of cargo and passengers. There is an existing railway infrastructure passing through the area.TEDA Vlora has access to the Port of Durrës (120 km away) and the Port of Vlora (5.7 km), the two biggest seaports in Albania. Table 2 shows Vlora Seaport’s capacity and Table 3 shows distance to other ports.

TEDA Vlora is located in a flat, saline land, partially covered by “Soda” Forest. The land is suitable for industrial and environmentally friendly development.

Industrial development inside the zone

Vlora is a vibrant coastal city with a well-developed and modern housing infrastructure. The city offers a variety of residential areas ranging from the coast and going inland. 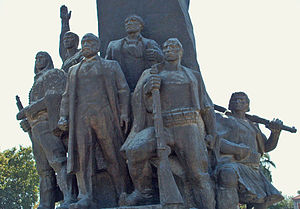 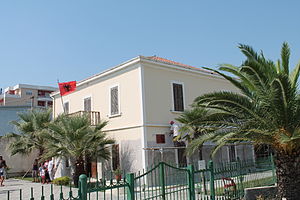 Because of the development of tourism in recent years, pubs, nightclubs, restaurants and bars have sprung up, especially in the area of 'Cold Water' (Uji i Ftohte), around 3 km (2 mi) distant from the center.

The citizens of Vlorë enjoy many kinds of sports. The most popular is football. Vlorë has two professional teams: KS Flamurtari Vlorë and Vlora City FC. Flamurtari currently plays in the Albanian Superliga, while Vlora FC competes in the Albanian First Division. Other sports played in Vlorë include basketball, volleyball, handball, athletics and swimming.

Vlorë is twinned with:

Vlorë appears in the video game Tom Clancy's EndWar as a possible battlefield. In the game, a major oil refinery is located there, which receives oil from the Black Sea.[19]