Voice acting in the United States

Voice acting in the United States.

For live action production, voice acting often involves reading the parts of computer programs (Douglas Rain; Majel Barrett), radio dispatchers (Shaaron Claridge), or characters who never actually appear on screen but who give instructions by telephone (John Forsythe in Charlie's Angels), or mailed recording (Bob Johnson in Mission: Impossible). "Stunt double" voice actors are sometimes employed; if a voice actor or actress loses his or her voice, someone who sounds similar can step in. For example, when Jeremy Irons' vocal cords became strained during the recording of The Lion King song "Be Prepared", Jim Cummings was called in to finish the song.

It is not unusual to find among the ranks of voice actors people who also act in live-action film or television, or on the stage (see e.g., J. Scott Smart, an "old time radio" actor). For those actors, voice acting has the advantage of offering acting work without having to bother with makeup, costuming, lighting, and so on. An occasional advantage is the fact that through voice acting, an actor can reprise a role that he has played in live action but would be otherwise too aged to portray. An example of this is Walter Koenig in Star Trek New Voyages who reprises his role as Lt. Pavel Chekov.

A common practice in animation is to cast a woman to play the role of a young boy. On The Simpsons, for example, Nancy Cartwright plays Bart Simpson and several other juvenile males. Other voice actresses who would fit this criterion are Debi Derryberry who voices Jimmy Neutron on The Adventures of Jimmy Neutron: Boy Genius or Tara Strong, who voices Timmy Turner, Poof, and other young boys on The Fairly OddParents (among other shows), and continues with Regina King as the voice of Huey and Riley Freeman on the Adult Swim show The Boondocks, and Alanna Ubach who voiced Manny Rivera/El Tigre on El Tigre: The Adventures of Manny Rivera. This casting practice goes back to the early 1930s with actresses such as Mae Questel providing the voices of various male babies and children in Fleischer Studios cartoons, and continues to this very day. June Foray, even as a senior citizen, can still faithfully voice Rocket J. Squirrel. Casting adult women for these parts can be especially useful if an ad campaign or a developed series is expected to run for several years, for while the vocal characteristics of a male child actor would change over time, the voice of an adult female will not. Another example where a female actor is used for the voice of a male is the character Miles "Tails" Prower in the Sonic The Hedgehog series.

There are also less common instances in which a production has a predominantly female voice cast, some of the actors portraying male characters. The best known example(s) would be Rugrats and its spinoff, All Grown Up! (both shows had an all-female voice cast).

Notable exceptions to using women to voice young boy characters are the Peanuts animated specials and films, in which boys were actually cast to read the boys' lines (e.g., Charlie Brown, Linus, Schroeder).[1] In South Park, the authors Trey Parker and Matt Stone are also voice actors for most male roles, especially the boys: Parker voices Stan, Cartman and others while Stone is the voice of Kyle, Kenny, Butters and others. South Park kids' voices are pitched up a little in order to seem more "childish". In addition, kindergarten kids on the show are voiced by actual young children for realism. "Little people," adult males of short stature who retained their youthful voices, were also sometimes employed; notably radio actors Dick Beals as Speedy Alka-Seltzer and several child voices for Hanna-Barbera, and Walter Tetley as the last voice of Andy Panda and as Sherman in Peabody's Improbable History.

Rise in use of film actors for voice roles

For much of the history of North American animation, voice actors had a predominantly low profile as performers, with Mel Blanc the major exception. Other early exceptions include Cliff Edwards in Pinocchio, Edward Brophy in Dumbo, Peggy Lee in Lady and the Tramp, and Jim Backus as Mister Magoo in a long running series of short cartoons. Over time, many movie stars began voice acting in movies, with some of the earliest examples being "Gay Purr-ee", starring the voices of Judy Garland, Robert Goulet, Red Buttons, Hermione Gingold, and Morey Amsterdam, and The Jungle Book, which counted among its cast contemporary stars such as Phil Harris, Sebastian Cabot, Louis Prima, George Sanders and Sterling Holloway. On TV, the Rankin-Bass studio employed the voices of such notable performers as Burl Ives, James Cagney, Jimmy Durante, Danny Kaye, Mickey Rooney, and Buddy Hackett in their animated specials; and popular comic actor Paul Lynde voiced several characters in Hanna-Barbera series, but refused to take on-screen credit for his work there. The film which truly brought about this modern perception, however was Aladdin which was marketed with a noted emphasis on Robin Williams' role, against the actor's own wishes. The success of this film eventually spurred the idea of highlighting the voice actors as stars of a film, this becoming the norm in movie marketing, with a greater focus on hiring Hollywood celebrities for name power, rather than performers with most experience in voice acting, particularly the Toy Story (Tom Hanks and Tim Allen) and Shrek (Mike Myers, Cameron Diaz, Eddie Murphy and Antonio Banderas) franchises. British animation also used big names, most notably Chicken Run (Mel Gibson, Timothy Spall, Jane Horrocks and Miranda Richardson) and Wallace and Gromit: The Curse of the Were-Rabbit (Ralph Fiennes, Liz Smith, Peter Kay and Helena Bonham Carter). By contrast, using anime voice actors as a box office draw was developed far earlier in Japan.

Some voice actors, such as Billy West, are highly critical of using movie stars for voices in animated features.[2] A particular point of contention is the practice of bringing in veteran voice actors (who are generally capable of greatly altering their voices and inflections in order to create personalities for characters) to read for a part, and then use the recording of the professional voice actor as a guide for the movie star, even though the actual character creation work is being done by the unpaid voice actor. West struck back at this practice in Comic Book: The Movie, in which the entire main cast comprises voice actors, including Jess Harnell, Lori Alan, Daran Norris, Mark Hamill and Tom Kenny. The practice of hiring singers to "fill in" for voice actors in a singing role has also seen change, as both Jeremy Irons and Mel Gibson have done singing in the respective films The Lion King and Pocahontas, rather than have a singer as substitute (However, the former did most of his own singing, but due to straining his vocal cords, he didn't finish; instead, Jim Cummings did his partial singing voice for the rest of the song). 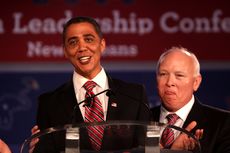 Reggie Brown, a voice actor and Barack Obama impersonator, while being escorted off stage.

Voice actors have a relatively small but dedicated fan base, with appearances at large events like Comic-Con International, various anime conventions, and websites dedicated to profiling their work.

Commercials for television and radio are also cast using voice acting agencies. Ernie Anderson was one of radio's most prominent voices throughout the 1970s and 1980s and was heard on radio stations across the United States. Nationally syndicated disc jockey Casey Kasem of "American Top 40" provided the voice of Shaggy in the Scooby-Doo TV cartoon series. While Don LaFontaine filled the category of "The Voice of God" narrator of thousands of movie preview trailers until his death in 2008, Ashton Smith, Howard Parker and Miguel Ferrer now provide most of the narration for movie trailers. David Mark was heard around the world for various radio stations and across the country for Fox TV, UPN and ABC TV. Kareem Taylor can be heard as the promotional voice for CNN, AT&T, Taco Bell and Comedy Central.