The Vojislavljević (Serbian: (pl.) Војислављевићи, Vojislavljevići) was a medieval dynasty, named after archon Stefan Vojislav, who wrestled the polities of Duklja, Travunia, Zahumlje, Rascia and Bosnia from the Byzantines in the mid-11th century. The main line of the Vojislavljević were ousted by their cadet branch, the Vukanović (which became the Nemanjić dynasty) in the late 12th century.

Stefan Vojislav, the progenitor of the dynasty, was a Serbian nobleman in Byzantine service who had the titles of archon, and toparch of the Dalmatian kastra of Zeta and Ston.[3][4] In 1034 he led an unsuccessful revolt that resulted in his incarceration at Constantinople, he however, managed to escape and return, this time successfully gaining independence of his statelet, which he would rule as Prince of the Serbs,[1] a title signifying supreme leadership among the Serbs. The contemporary writers call him a Serb, but do not mention his geneaology, while a later, dubious source, calls him a cousin to previous ruler Jovan Vladimir (r. 990–1016).[B]

Main article: Mihailo I of Duklja 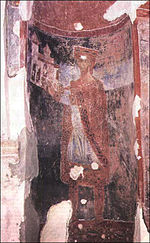 Fresco of Mihailo I in the Church of St. Michael in Ston.

Mihailo I became Grand Prince around 1050/1055. He restored independence and maintained it from the Byzantine Empire. He sought closer relations with other great powers, such as the Pope and the Normans. Mihailo installed his son Petrislav as Prince of Rascia. After the aborted rebellion in Bulgaria, the military governor of Dyrrhachium, Nicephorus Bryennius, restored Byzantine rule to Rascia in 1073. Mihailo reportedly received royal insignia in 1077 from Pope Gregory VII, although this is still a matter of debate. An image of King Mihajlo with his crown is still found in the Church of St. Michael in Ston, a town in the Pelješac peninsula (in present-day Croatia). Mihajlo's rule ended in 1080.

His successor was his son Constantin Bodin, who ruled from 1080 to 1101. Bodin fought Byzantium and Normans further to the south, and took the town of Dyrrachium. He established vassal states in Bosnia (under Stefan) and Raška (under Vukan and Marko), which recognized his supremacy. Vukan and Marko, the new princes of Raška were probably sons of the aforementioned Petrislav. Vukan (1083–1115) was the Grand Župan while Marko headed administration of a part of the land. The Byzantine Emperor Alexios later forced Vukan to acknowledge Byzantine suzerainty in 1094. After Bodin died in 1101, incessant struggles for power among his heirs weakened the state. Bodin had previously exiled Dobroslav, his younger brother, together with their cousin Kočapar. In 1101 they returned, and vied for power together with another grandson of Mihajlo's, Vladimir. Vladimir at one point married the daughter of Vukan of Raška.

One of the sons of Uroš I was Zavida, Prince of Zahumlje. His four sons would eventually bring order to the Rascian lands and found the House of Nemanja.

In these struggles, the pro-Raška rulers eventually managed to rise to power in Duklja, culminating in the rise of Stefan Nemanja, one of Zavida's sons (around 1166). His son Stefan Nemanjić restored the old Doclean crown in 1217 by receiving from the Pope regal insignia as "King of all Serbs and Maritime Lands".

After Constantine Bodin, the Chronicle of the Priest of Duklja claims that the following members of the same family ruled Duklja:

However, none of these are mentioned in contemporary sources.[6]