From Infogalactic: the planetary knowledge core
Jump to: navigation, search
This article is about the Danish metal band. For the fictional creature, see Volbeat (Pokémon).

Volbeat are a Danish metal band which was formed in Copenhagen. They play a fusion of rock and roll, heavy metal and rockabilly. They are inspired by classic rock and roll artists such as Elvis Presley and Johnny Cash, as well as modern hard rock, thrash metal, heavy metal, alternative rock and hardcore groups. Their current line-up consists of vocalist and guitarist Michael Poulsen, guitarist Rob Caggiano (ex-Anthrax), and drummer Jon Larsen. The band is signed to Dutch label Mascot Records and has released five studio albums and one DVD. All of their studio albums have been certified gold in Denmark. Their second album Rock the Rebel/Metal the Devil received platinum status, and their 2010 release Beyond Hell/Above Heaven was subject to widespread international critical acclaim, receiving double platinum in Denmark, platinum in Finland and Germany, and gold in Sweden and Austria. Volbeat's fifth album entitled Outlaw Gentlemen & Shady Ladies was released worldwide on 9 April 2013. 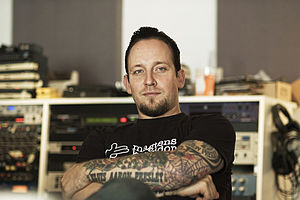 Singer Michael Poulsen's first band was death metal act Dominus. In 2000, Poulsen became fed up with the death metal music scene, causing Dominus to break up. In 2001, Poulsen went on to form a new band with some friends and other former Dominus members. This was the beginning of Volbeat.

The band name "Volbeat" was derived from Dominus's third album name, which was called Vol.Beat (read as: Volume Beat). After selling 1,000 copies of their "Beat the Meat" demo tape, Volbeat was signed to a record deal by Rebel Monster Records, a sub-label of Mascot Records.

Volbeat released their first album, The Strength/The Sound/The Songs in 2005. The lineup for the album consisted of Michael Poulsen (vocals), Jon Larsen (drums), Franz Gottschalk (guitar) and Anders Kjølholm (bass). The album was a huge success in Denmark achieving a spot at No. 18 in the charts.[1] Critics were generally positive towards The Strength / The Sound / The Songs. The German hard rock magazine RockHard gave it 10/10 in a review.[2] The Strength / The Sound / The Songs also received a handful of awards, including Best Album in the Danish Metal Musik Awards in 2005.[3] Volbeat was praised for its live performances. Their concert at Roskilde Festival 2006 received a 6/6 stars review in the Danish newspaper BT.[4] 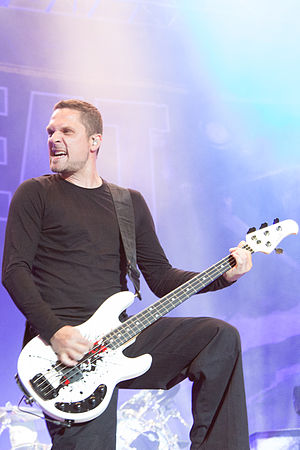 Volbeat opened the Roskilde Festival in 2007. Volbeat also supported Metallica together with Mnemic at their concert in Denmark 13 July of that year. They were to support Megadeth in Finland and in their home town, Copenhagen, and to make a few festival appearances for the summer 2008. Volbeat hired Thomas Bredahl following the recording of Rock the Rebel / Metal the Devil as a replacement for Gottschalk on guitar.

In 2008, Volbeat released their third album, Guitar Gangsters & Cadillac Blood featuring guitarist Thomas Bredahl. Guitar Gangsters & Cadillac Blood topped the Finnish Album Chart straight after its publication.[5] In 2009, Volbeat supported the symphonic metal band Nightwish on their U.S tour in May.[6] On 31 May 2009 they were on the main stage of the Pinkpop Festival. They also supported Metallica on the North American leg of Metallica's World Magnetic Tour from October to December 2009.[7] In 2009 the band played at the biggest open-air festival in Europe (400,000–500,000 rock fans every year), Przystanek Woodstock[8] in Poland. 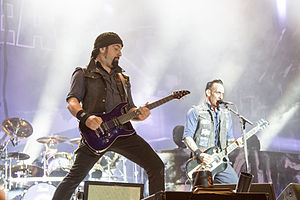 Volbeat had announced they were working on a new album called Beyond Hell/Above Heaven. In regard to the album and its title in particular Poulsen said, “The album title refers to the overall theme of the album, and it continues the storyline from where "Guitar Gangsters & Cadillac Blood" left off…”.[9] On 25 January 2010, it was confirmed that Volbeat would be performing at Download Festival in June 2010. It was also confirmed that Volbeat were to join Metallica, Megadeth, Anthrax, Slayer and others in the "Big Four" show at Sonisphere Switzerland.[10] It was also announced that the new album, Beyond Hell/Above Heaven was to be released on 10 September 2010. The band also announced their "Beyond Hell/Above Heaven Live 2010" tour.[11] In 2011, Volbeat announced their Grand Summer Tour across North America. The tour began in Toronto, Ontario on 24 July at Heavy T.O., and concluded with a two-night stand on 3 & 4 September at the House of Blues in Anaheim, CA. Volbeat co-headlined this tour with rock powerhouse Cold on all U.S. dates, but not in Canada. On 28 November 2011, Volbeat announced the departure of Bredahl via their website.[12] Volbeat committed to playing all 2011-2012 as scheduled either as a trio, or with a replacement guitarist. On 26 January 2012, Volbeat joined Megadeth, Motörhead, and Lacuna Coil on Gigantour. The tour started in Camden, New Jersey and culminated on 28 February 2012 in Denver, CO at The Fillmore Auditorium. On the tour, Hank Shermann (Mercyful Fate) filled in as the guitarist for Volbeat. On their North American Summer tour, which began in June 2012, Iced Earth and Hellyeah were the supporting acts. The tour included dates in Baltimore, Toronto, Detroit, Billings, Boston, Tempe, San Francisco, and Weyburn and Lazerfest in Boone, IA and in June, Orion Music Festival, headlined by Metallica, at Bader Field in Atlantic City, New Jersey.[13]

Volbeat were confirmed to be playing Download festival June 2013. Volbeat announced in December that their new album would be released during 2013. A spring tour with Danko Jones and Spoken was announced in December. In January 2013, Volbeat revealed the name of the new album, Outlaw Gentlemen & Shady Ladies, and that was released in the spring of 2013.

On 4 February 2013, it was announced that Rob Caggiano, formerly of Anthrax, had officially joined the band as second guitarist. He had been producing and recording guest solos on the band's upcoming album, Outlaw Gentlemen and Shady Ladies, which the band also announced will be released on 8 April 2013 (GSA on 5 April and US on 9 April), before being asked to join as a full-time member. Singer and guitarist Michael Poulsen said of the chemistry between Caggiano and the rest of the band "The collaboration with Rob in the studio was so inspiring and in good spirit that we the decided to keep him. Basically we went into the studio as a three piece and came out as a whole band!" [14]

Michael Poulsen confirmed during the band's 2015 tour with Anthrax and Crobot, that a new album was in the works, hinting that it would be released in 2016, and demoed a new song throughout the tour titled "The Devil's Bleeding Crown".[15]

In November 2015 the band announced that Kjølholm would leave Volbeat. They emphasized, that he left in good terms with the band. Poulsen and Larsen said that "Anders has been a loyal friend and bandmate since 2001. [...] We’re very thankful for this and wish Anders all the best in the future." Kjøholm likewise wished all the best for the rest of the band.[16][17][18]