Lenin Volga–Don Shipping Canal (Russian:Волго-Донской судоходный канал имени, В. И. Ленина, Volga-Donskoy soudokhodniy kanal imeni V. I. Lenina, abbreviated ВДСК, VDSK) is a broad ship canal that connects the Volga and the Don at their closest points. Opened in 1952, its length is 101 km (63 mi), 45 km (28 mi) of which is through rivers and reservoirs.

The canal forms a part of the Unified Deep Water System of European Russia. Together with the lower Volga and the lower Don, the canal provides the shortest navigable connection between the Caspian Sea and the world's oceans, if the Mediterranean is counted, via the Sea of Azov and the Black Sea.

There has been a trade and military route between the Volga and Don rivers from early human history.

The existence of fortified settlement Tanais in the Don River delta, present since a time in the Bosporan Kingdom c. 438 BC &ndashl 370 AD, strongly suggests the route may have been notable enough to be fortified for more than two thousand years. The Sarkel fortress, on the near (left bank) of the lower Don, was the main control of this Volga trade route.[4] 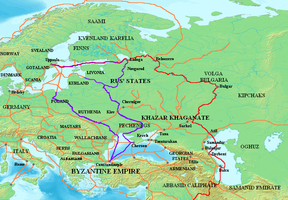 Sarkel and Tanais on the Volga trade route 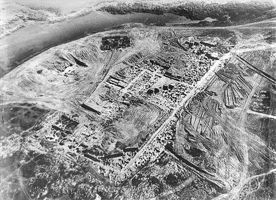 The Don–Volga Portage got its name from its trade importance 1000 years ago.[5]

In 1569, the Ottoman Empire attempted to connect the Volga and Don rivers via a canal. The Ottomans wanted to create a maritime link to Central Asia (especially the cities of Bukhara, Khwarazm and Samarkand) to facilitate trade.[6] Together with a proposed Suez canal, the Volga-Don canal would also allow Central Asian Muslims to perform pilgrimage to Mecca.[6] According to most historians, the Ottomans managed to dig one-third of the canal,[7][8] before work was abandoned due to adverse weather.[9] Other historians argue that the Ottomans merely leveled the ground so they could haul ships between the two rivers.[10] In the end, the Ottomans retreated from the area and Russia promised to respect trade and pilgrimage routes to Central Asia.[6]

The first Russian attempts to connect the Volga and Don rivers were ordered by Peter the Great.[11] After capturing Azov in 1696, he decided to build a canal, but due to a lack of resources and other problems, this attempt was abandoned in 1701. He initiated a second attempt (the so-called Ivanovsky Canal at Yepifan) under the administration of Knyaz Matvey Gagarin, however it was too shallow, as it was on the upper Don and upper Volga and their tributaries; Ilovlya River (a left tributary of the Don) and Kamyshinka river (right tributary of the Volga).[12][13] Compared to the canal it was much shorter, connecting a gap of 4 kilometers (2.5 mi). Between 1702 and 1707, twenty-four locks were constructed, and in 1707, about 300 ships passed through with difficulty. This canal was named Petrov Val, after the city Petrov Val, in honor of Peter the Great.[14] In 1709 due to financial difficulties caused by the Great Northern War, the project was halted.

In 1711, under the terms of the Treaty of the Pruth, Russia left Azov and Peter the Great lost all interest in the canal, which was abandoned and fell into ruin.[15][16] Over time, other projects for connecting the two rivers were proposed, but none were attempted. However, Dubovsko-Kachalinsky railway, which was horse-drawn railway and Volga–Don railway, which is now part of the South Eastern Railway were built in 1846 and 1852 respectively in order link the Volga and the Don at the shortest distance.[17] They were 68km and 73km long respectively.[18][19]

The construction of today's Volga–Don Canal, designed by Sergey Zhuk's Hydroproject Institute, began prior to the Second World War, which interrupted the process. Construction works continued from 1948 to 1952 and the canal was opened on June 1, 1952. The canal and its facilities were built by about 900,000 workers including some 100,000 German POWs and 100,000 gulag prisoners. A day spent at the construction yard was counted as three days in prison, which spurred the prisoners to work. Several convicts were even awarded the Order of the Red Banner of Labour upon their release.

Upon completion, the Volga–Don Canal became an important link in the Unified Deep Water Transportation System of the European part of the USSR. 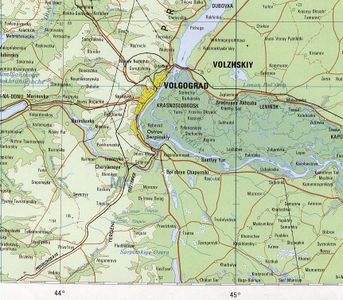 The canal starts at the Sarepta backwater of the Volga, south of Volgograd where Lock No. 1 and the gateway arch are at Lua error in Module:Coordinates at line 668: callParserFunction: function "#coordinates" was not found.. It ends in the Tsimlyansk Reservoir of the Don at the town of Kalach-na-Donu. The canal has nine one-chamber canal locks on the Volga slope to raise/lower ships 88 m (289 ft), and four canal locks of the same kind on the Don slope that raise/lower ships 44 m (144 ft) from river height. The overall dimensions of the locks are smaller than those on the Volga River, however they can bear ships of up to 5,000 tonnes cargo capacity.

The canal is filled from the Don, with three powerful pumping stations that maintain water levels. Water is also taken from the canal and used for irrigation.

Tourist cruisers travel in both directions.

Panorama of the canal in the suburbs of Kalach-na-Donu
File:Krasnoameyskiy district of Volgograd 002.jpg
Volga–Don Canal in Volgograd

The canal and the Tsimlyansky water-engineering system (whose chief architect was Leonid Polyakov), form part of an architectural ensemble dedicated to the battles for Tsaritsyn during the Russian Civil War and for Stalingrad during the German-Soviet War.

The Russian classical composer Sergei Prokofiev wrote the tone poem The Meeting of the Volga and the Don to celebrate its completion.

According to the Maritime Board (Morskaya Kollegiya) of the Russian government, 10.9 million tonnes of cargo were carried over the Volga–Don Canal in 2004.[20]

It was reported in 2007 that in the first 55 years of the canal's operations 450,000 vessels had passed through carrying 336 million tonnes of cargo. Recent cargo volume stood at 12 million tonnes a year.[22]

In 2016, the core of Belarusian nuclear power plant VVER-1200, which weighed 330 tonnes, was 13 meters high, and 4.5 meters in diameter, was transferred to its destination by exploiting Tsimlyansk Reservoir, the Volga-Don Canal, the Volga–Baltic Waterway, and two other connections.[23]

In the 1980s, construction started on a second canal between the rivers. The new canal, dubbed Volga–Don 2 (Russian: Волго-Дон 2; Lua error in Module:Coordinates at line 668: callParserFunction: function "#coordinates" was not found.) would start from the township of Yerzovka on the Volgograd Reservoir, north (upstream) of the Volga Dam, as opposed to the existing Volga–Don Canal that starts south (downstream) of the dam.[24] This would cut the number of locks that ships coming from the Volgograd Reservoir, or from any other Volga or Kama port farther north, would have to traverse on their way to the Don. The project was abruptly cancelled on 1 August 1990 to cut expenditure, by which time more than 40 percent of its funds had already been spent.[24][25][26] Since then most of the stone and metal in the abandoned canal and its locks has been looted.[27]

As of 2007–2008, Russian authorities are considering two options for increasing the throughput of navigable waterways between the Caspian basin and the Black Sea. One option, which reuses the name "Volga–Don 2", is to build a second parallel channel ("second thread") of the Volga–Don Canal, equipped with larger locks 300 metres (980 ft) long. This plan would allow for an increase in the canal's annual cargo throughput from 16.5 million tonnes to 30 million tonnes. The other option, which seems to have more support from Kazakhstan,[28] who would be either canal's major customer, is to build the so-called Eurasia Canal along a more southerly route in the Kuma–Manych Depression, some of which is the much shallower Manych Ship Canal. Needing less digging than the first option and of little use to traffic to/from from the Volga, it would provide a speedier connection between the Caspian and the Sea of Azov. It would also require fewer locks than the Volga–Don, as elevations in the Kuma–Manych Depression are lower.[29]