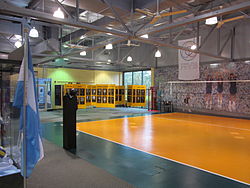 The Volleyball Hall of Fame was founded to honor extraordinary players, coaches, officials, and leaders who have made significant contributions to the game of volleyball. The hall is located in Holyoke, Massachusetts, where volleyball was invented in 1895 by William G. Morgan at the local YMCA.[1]

In 1971 the Greater Holyoke Chamber of Commerce established a committee to campaign for the founding of the Volleyball Hall of Fame in Holyoke, Massachusetts, which is where volleyball was originally founded. In 1895, William G. Morgan, the inventor of volleyball, was posthumously inducted into the hall as its first member. A small exhibit dedicated to the history of volleyball and the hall of fame's inductees opened in a local building on June 6, 1987 with 1,600 square feet (150 m2) of space. In 1997 the exhibit moved to a new temporary location, and is now awaiting movement to a permanent museum. The temporary location is at the Holyoke Heritage Park near the Children's Museum.[1][2]

Prior to 1998 the Hall of Fame only inducted members from the United States.

The following tables enumerate all of the inductees to the Volleyball Hall of Fame through 2015.[3][4]