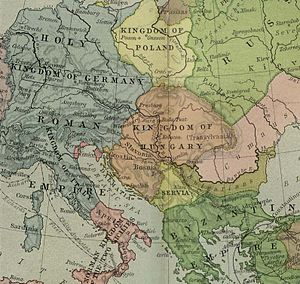 Zvenyhorod depicted on the map (of 1190) as Zvenyhorod in P. of Halicz (light green).

He actively was involved in the Polish internal affairs. Volodar also waged a war against the Grand Prince of Kiev Sviatopolk II of Kiev and his son Yaroslav. In 1121 Volodar was imprisoned in Poland, but was bonded out by his brother Vasylko Rostyslavych.

Together with Vasylko participated at the federal council in Liubech in 1097 (see Council of Liubech).

Today there is confusion between two localities of former Zvenyhorod city, one being located in Pustomyty Raion near Lviv and another in Borshchiv or Buchach Raion (2 in Ternopil Oblast). The map on the left shows one east of Halych (pol. Halicz), which is one in the Ternopil Oblast, while the official Ukrainian historiography claims the one near Lviv, which would be located north of Halych.