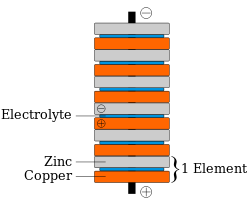 Schematic diagram of a copper–zinc voltaic pile. The copper and zinc discs were separated by cardboard or felt spacers soaked in salt water (the electrolyte). Volta's original piles contained an additional zinc disk at the bottom, and an additional copper disk at the top. These were later shown to be unnecessary.
File:VoltaBattery.JPG
A voltaic pile on display in the Tempio Voltiano (the Volta Temple) near Volta's home in Como.

The voltaic pile was the first electrical battery that could continuously provide an electrical current to a circuit. It was invented by Alessandro Volta, who published his experiments in 1800. The voltaic pile then enabled a rapid series of discoveries including the electrical decomposition (electrolysis) of water into oxygen and hydrogen by William Nicholson and Anthony Carlisle (1800) and the discovery or isolation of the chemical elements sodium (1807), potassium (1807), calcium (1808), boron (1808), barium (1808), strontium (1808), and magnesium (1808) by Humphry Davy.[1][2]

The entire 19th century electrical industry was powered by batteries related to Volta's (e.g. the Daniell cell and Grove cell) until the advent of the dynamo (the electrical generator) in the 1870s.

Volta's invention built on Luigi Galvani's 1780s discovery of how a circuit of two metals and a frog's leg can cause the frog's leg to respond. Volta demonstrated in 1794 that when two metals and brine-soaked cloth or cardboard are arranged in a circuit they produce an electric current. In 1800, Volta stacked several pairs of alternating copper (or silver) and zinc discs (electrodes) separated by cloth or cardboard soaked in brine (electrolyte) to increase the electrolyte conductivity.[3] When the top and bottom contacts were connected by a wire, an electric current flowed through the voltaic pile and the connecting wire.

On 20 March 1800, Volta wrote to the London Royal Society to describe the technique for producing electric current using his device.[4] On learning of the voltaic pile, William Nicholson and Anthony Carlisle used it to discover the electrolysis of water. Humphry Davy showed that the electromotive force, which drives the electric current through a circuit containing a single voltaic cell, was caused by a chemical reaction, not by the voltage difference between the two metals. He also used the voltaic pile to decompose chemicals and to produce new chemicals. William Hyde Wollaston showed that electricity from voltaic piles had identical effects to those of electricity produced by friction. In 1802 Vasily Petrov used voltaic piles in the discovery and research of electric arc effects.

Sir Humphry Davy and Andrew Crosse were among the first to develop large voltaic piles.[5] Davy used a 2000-pair pile made for the Royal Institution in 1808 to demonstrate carbon arc discharge[6] and isolate five new elements: barium, calcium, boron, strontium and magnesium.[7]

Because Volta believed that the electromotive force occurred at the contact between the two metals, Volta's piles had a different design than the modern design illustrated on this page. His piles had one extra disc of copper at the top, in contact with the zinc, and one extra disc of zinc at the bottom, in contact with the copper. Expanding on the work of his mentor Davy, in the early 1830s, Faraday studied voltaic cells in detail. This led to his founding of the area of electrochemistry. The words "electrode" and "electrolyte", used above to describe Volta's work, are due to Faraday.

A number of high-voltage dry piles were invented between the early 19th century and the 1830s in an attempt to determine the source of electricity of the wet voltaic pile, and specifically to support Volta’s hypothesis of contact tension. Indeed, Volta himself experimented with a pile whose cardboard discs had dried out, most likely accidentally.

The first to publish was Johann Wilhelm Ritter in 1802, albeit in an obscure journal, but over the next decade, it was announced repeatedly as a new discovery. One form of dry pile is the Zamboni pile. The dry pile was the ancestor of the modern dry cell.

The strength of the pile is expressed in terms of its electromotive force, or emf, given in volts. Volta's theory of contact tension considered that the emf, which drives the electric current through a circuit containing a voltaic cell, occurs at the contact between the two metals. Volta did not consider the electrolyte, which was typically brine in his experiments, to be significant.

However, chemists soon realized that water in the electrolyte was involved in the pile's chemical reactions, and led to the evolution of hydrogen gas from the copper or silver electrode.[1][8][9][10] The contemporary, atomic understanding of a cell with zinc and copper electrodes separated by an electrolyte is the following. When the cell is providing an electrical current through an external circuit, the metallic zinc at the surface of the zinc electrode is dissolving into the electrolyte as electrically charged ions (Zn2+), leaving 2 negatively charged electrons (e−) behind in the metal:

This reaction is called reduction. The electrons used from the copper to form the molecules of hydrogen are made up by an external wire or circuit that connects it to the zinc. The hydrogen molecules formed on the surface of the copper by the reduction reaction ultimately bubble away as hydrogen gas.

When no current is drawn from the pile, each cell, consisting of zinc/electrolyte/copper, generates 0.76 V with a brine electrolyte. The voltages from the cells in the pile add, so the six cells in the diagram above generate 4.56 V of electromotive force.