A volumetric display device is a graphic display device that forms a visual representation of an object in three physical dimensions, as opposed to the planar image of traditional screens that simulate depth through a number of different visual effects. One definition offered by pioneers in the field is that volumetric displays create 3D imagery via the emission, scattering, or relaying of illumination from well-defined regions in (x,y,z) space. Though there is no consensus among researchers in the field, it may be reasonable to admit holographic and highly multiview displays to the volumetric display family if they do a reasonable job of projecting a three-dimensional light field within a volume.

Most, if not all, volumetric 3D displays are either autostereoscopic or automultiscopic; that is, they create 3D imagery visible to the unaided eye. Note that some display technologists reserve the term “autostereoscopic” for flat-panel spatially multiplexed parallax displays, such as lenticular-sheet displays. However, nearly all 3D displays other than those requiring headwear, e.g. stereo goggles and stereo head-mounted displays, are autostereoscopic. Therefore, a very broad group of display architectures are properly deemed autostereoscopic.

Although first postulated in 1912, and a staple of science fiction, volumetric displays are still under development, and have yet to reach the general population. With a variety of systems proposed and in use in small quantities — mostly in academia and various research labs — volumetric displays remain accessible only to academics, corporations, and the military.

Many different attempts have been made to produce volumetric imaging devices.[1] There is no officially accepted "taxonomy" of the variety of volumetric displays, an issue which is complicated by the many permutations of their characteristics. For example, illumination within a volumetric display can either reach the eye directly from the source or via an intermediate surface such as a mirror or glass; likewise, this surface, which need not be tangible, can undergo motion such as oscillation or rotation. One categorization is as follows:

Swept-surface (or "swept-volume") volumetric 3D displays rely on the human persistence of vision to fuse a series of slices of the 3D object into a single 3D image. A variety of swept-volume displays have been created.

For example, the 3D scene is computationally decomposed into a series of "slices," which can be rectangular, disc-shaped, or helical cross-sectioned, whereupon they are projected onto or from a display surface undergoing motion. The image on the 2D surface (created by projection onto the surface, LEDs embedded in the surface, or other techniques) changes as the surface moves or rotates. Due to the persistence of vision humans perceive a continuous volume of light. The display surface can be reflective, transmissive, or a combination of both.

Another type of 3D display which is a candidate member of the class of swept-volume 3D displays is the varifocal mirror architecture. One of the first references to this type of system is from 1966, in which a vibrating mirrored drumhead reflects a series of patterns from a high frame rate 2D image source, such as a vector display, to a corresponding set of depth surfaces.

So-called "static volume" volumetric 3D displays create imagery without any macroscopic moving parts in the image volume. It is unclear if the rest of the system must remain stationary for membership in this display class to be viable.

This is probably the most 'direct' form of volumetric display. In the simplest case, an addressable volume of space is created out of active elements that are transparent in the off state but are either opaque or luminous in the on state. When the elements (called voxels) are activated, they show a solid pattern within the space of the display.

Several static-volume volumetric 3D displays use laser light to encourage visible radiation in a solid, liquid, or gas. For example, some researchers have relied on two-step upconversion within a rare earth-doped material when illuminated by intersecting infrared laser beams of the appropriate frequencies.[2][3]

Recent advances have focused on non-tangible (free-space) implementations of the static-volume category, which might eventually allow direct interaction with the display. For instance, a fog display using multiple projectors can render a 3D image in a volume of space, resulting in a static-volume volumetric display.[4][5]

A technique presented in 2006 does away with the display medium altogether, using a focused pulsed infrared laser (about 100 pulses per second; each lasting a nanosecond) to create balls of glowing plasma at the focal point in normal air. The focal point is directed by two moving mirrors and a sliding lens, allowing it to draw shapes in the air. Each pulse creates a popping sound, so the device crackles as it runs. Currently it can generate dots anywhere within a cubic metre. It is thought that the device could be scaled up to any size, allowing for 3D images to be generated in the sky.[6][7]

Later modifications such as the use of an neon/argon/xenon/helium gas mix similar to a plasma globe and a rapid gas recycling system employing a hood and vacuum pumps could allow this technology to achieve two colour (R/W) and possibly RGB by changing the pulse width and intensity of each pulse to tune the emission spectra of the luminous plasma body. 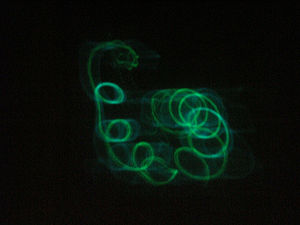 An artform called Hologlyphics has been explored since 1994, combining elements of holography, music, video synthesis, visionary film, sculpture and improvisation. Volumetric movies have been shown to live audiences at film festivals, art galleries and music events. Multiple Volumetric Displays and multi-loudspeaker arrays surround an audience. The movies are shown in conjunction with music, either live or recorded with the volumetric animations.

The original intent was to combine Holography with Music, and finally Volumetric Displays were settled on as an artistic medium. Many traditional film & video special effects have been adapted to Hologlyphic Movies, plus many more special effects unique to Volumetric Displays have been developed. These include volumetric wipe effects, raster bending, morphing, kaleidoscope & mirroring effects, experimental rotations, spatial warping effects and image sequencing.

The Hologlyphic movies can also be performed in real-time, like a video synthesizer, controlled by musical keyboards, motion sensors, control panels, and acoustic instruments. The image generation system is mostly digital, but some of the original image generators and processors were analog and remain in use.

Known volumetric display technologies also have several drawbacks that are exhibited depending on trade-offs chosen by the system designer.

It is often claimed that volumetric displays are incapable of reconstructing scenes with viewer-position-dependent effects, such as occlusion and opacity. This is a misconception; a display whose voxels have non-isotropic radiation profiles are indeed able to depict position-dependent effects. To-date, occlusion-capable volumetric displays require two conditions: (1) the imagery is rendered and projected as a series of "views," rather than "slices," and (2) the time-varying image surface is not a uniform diffuser. For example, researchers have demonstrated spinning-screen volumetric displays with reflective and/or vertically diffuse screens whose imagery exhibits occlusion and opacity. One system[13][14] created HPO 3D imagery with a 360-degree field of view by oblique projection onto a vertical diffuser; another[15] projects 24 views onto a rotating controlled-diffusion surface; and another[16] provides 12-view images utilizing a vertically oriented louver.

So far, the ability to reconstruct scenes with occlusion and other position-dependent effects have been at the expense of vertical parallax, in that the 3D scene appears distorted if viewed from locations other than those the scene was generated for.

One other consideration is the very large amount of bandwidth required to feed imagery to a volumetric display. For example, a standard 24 bits per pixel, 1024×768 resolution, flat/2D display requires about 135 MB/s to be sent to the display hardware to sustain 60 frames per second, whereas a 24 bits per voxel, 1024×768×1024 (1024 "pixel layers" in the Z axis) volumetric display would need to send about three orders of magnitude more (135 GB/s) to the display hardware to sustain 60 volumes per second. As with regular 2D video, one could reduce the bandwidth needed by simply sending fewer volumes per second and letting the display hardware repeat frames in the interim, or by sending only enough data to affect those areas of the display that need to be updated, as is the case in modern lossy-compression video formats such as MPEG. Furthermore, a 3D volumetric display would require two to three orders of magnitude more CPU and/or GPU power beyond that necessary for 2D imagery of equivalent quality, due at least in part to the sheer amount of data that must be created and sent to the display hardware. However, if only the outer surface of the volume is visible, the number of voxels required would be of the same order as the number of pixels on a conventional display. This would only be the case if the voxels do not have "alpha" or transparency values.