Vomiting, also known as puking and throwing up, among other terms, is the involuntary, forceful expulsion of the contents of one's stomach through the mouth and sometimes the nose.[1]

Vomiting can be caused by a wide variety of conditions; it may present as a specific response to ailments like gastritis or poisoning, or as a non-specific sequela of disorders ranging from brain tumors and elevated intracranial pressure to overexposure to ionizing radiation. The feeling that one is about to vomit is called nausea, which often precedes, but does not always lead to, vomiting. Antiemetics are sometimes necessary to suppress nausea and vomiting. In severe cases, where dehydration develops, intravenous fluid may be required.

Vomiting is different from regurgitation, although the two terms are often used interchangeably. Regurgitation is the return of undigested food back up the esophagus to the mouth, without the force and displeasure associated with vomiting. The causes of vomiting and regurgitation are generally different.

Vomiting can be dangerous if the gastric content enters the respiratory tract. Under normal circumstances the gag reflex and coughing prevent this from occurring; however, these protective reflexes are compromised in persons under the influences of certain substances such as alcohol or anesthesia. The individual may choke and asphyxiate or suffer an aspiration pneumonia.[citation needed]

Prolonged and excessive vomiting depletes the body of water (dehydration), and may alter the electrolyte status. Gastric vomiting leads to the loss of acid (protons) and chloride directly. Combined with the resulting alkaline tide, this leads to hypochloremic metabolic alkalosis (low chloride levels together with high HCO−
3 and CO
2 and increased blood pH) and often hypokalemia (potassium depletion). The hypokalemia is an indirect result of the kidney compensating for the loss of acid. With the loss of intake of food the individual may eventually become cachectic. A less frequent occurrence results from a vomiting of intestinal contents, including bile acids and HCO−
3, which can cause metabolic acidosis.[citation needed]

Repeated or profuse vomiting may cause erosions to the esophagus or small tears in the esophageal mucosa (Mallory-Weiss tear). This may become apparent if fresh red blood is mixed with vomit after several episodes.[citation needed]

Recurrent vomiting, such as observed in bulimia nervosa, may lead to destruction of the tooth enamel due to the acidity of the vomit. Digestive enzymes can also have a negative effect on oral health, by degrading the tissue of the gums.[citation needed] 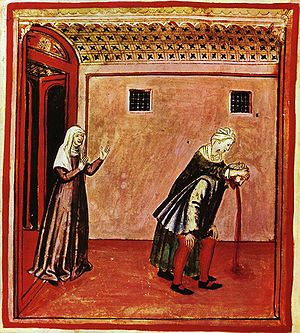 14th-century illustration of vomiting from the Casanatense Tacuinum Sanitatis

Receptors on the floor of the fourth ventricle of the brain represent a chemoreceptor trigger zone, known as the area postrema, stimulation of which can lead to vomiting. The area postrema is a circumventricular organ and as such lies outside the blood–brain barrier; it can therefore be stimulated by blood-borne drugs that can stimulate vomiting or inhibit it.[2]

There are various sources of input to the vomiting center:

The neurotransmitters that regulate vomiting are poorly understood, but inhibitors of dopamine, histamine, and serotonin are all used to suppress vomiting, suggesting that these play a role in the initiation or maintenance of a vomiting cycle. Vasopressin and neurokinin may also participate.[citation needed]

The vomiting act has two phases. In the retching phase, the abdominal muscles undergo a few rounds of coordinated contractions together with the diaphragm and the muscles used in respiratory inspiration. For this reason, an individual may confuse this phase with an episode of violent hiccups. In this retching phase nothing has yet been expelled. In the next phase, also termed the expulsive phase, intense pressure is formed in the stomach brought about by enormous shifts in both the diaphragm and the abdomen. These shifts are, in essence, vigorous contractions of these muscles that last for extended periods of time - much longer than a normal period of muscular contraction. The pressure is then suddenly released when the upper esophageal sphincter relaxes resulting in the expulsion of gastric contents. Individuals who do not regularly exercise their abdominal muscles may experience pain in those muscles for a few days. The relief of pressure and the release of endorphins into the bloodstream after the expulsion causes the vomiter to feel better.[citation needed]

Gastric secretions and likewise vomit are highly acidic. Recent food intake appears in the gastric vomit. Irrespective of the content, vomit tends to be malodorous.[citation needed]

The content of the vomitus (vomit) may be of medical interest. Fresh blood in the vomit is termed hematemesis ("blood vomiting"). Altered blood bears resemblance to coffee grounds (as the iron in the blood is oxidized) and, when this matter is identified, the term coffee-ground vomiting is used. Bile can enter the vomit during subsequent heaves due to duodenal contraction if the vomiting is severe. Fecal vomiting is often a consequence of intestinal obstruction or a gastrocolic fistula and is treated as a warning sign of this potentially serious problem (signum mali ominis).[citation needed]

If the vomiting reflex continues for an extended period with no appreciable vomitus, the condition is known as non-productive emesis or "dry heaves", which can be painful and debilitating.[citation needed]

Vomiting may be due to a large number of causes, and protracted vomiting has a long differential diagnosis.[citation needed]

Causes in the digestive tract

Causes in the sensory system:[citation needed]

Causes in the brain:[citation needed]

Metabolic disturbances (these may irritate both the stomach and the parts of the brain that coordinate vomiting):[citation needed]

Illness (sometimes colloquially known as "stomach flu" — a broad name that refers to gastric inflammation caused by a range of viruses and bacteria):[citation needed]

An emetic, such as syrup of ipecac, is a substance that induces vomiting when administered orally or by injection. An emetic is used medically when a substance has been ingested and must be expelled from the body immediately (for this reason, many toxic and easily digestible products such as rat poison contain an emetic). Inducing vomiting can remove the substance before it is absorbed into the body. Ipecac abuse can cause detrimental health effects.[citation needed]

Salt water and mustard water have been used since ancient times as emetics.[8] Care must be taken with salt, as excessive intake can potentially be harmful.[9][10]

Copper sulfate was also used in the past as an emetic.[11][12] It is now considered too toxic for this use.[13]

Hydrogen peroxide is used as an emetic in veterinary practice.[14][15] 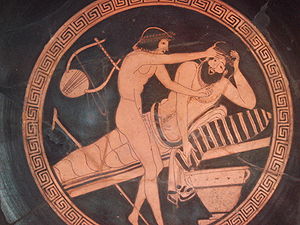 A drunk man vomiting, while a young slave is holding his forehead. Brygos Painter, 500-470 BC

It is quite common that, when one person vomits, others nearby become nauseated, particularly when smelling the vomit of others, often to the point of vomiting themselves. It is believed that this is an evolved trait among primates. Many primates in the wild tend to browse for food in small groups. Should one member of the party react adversely to some ingested food, it may be advantageous (in a survival sense) for other members of the party to also vomit. This tendency in human populations has been observed at drinking parties, where excessive consumption of alcoholic beverages may cause a number of party members to vomit nearly simultaneously, this being triggered by the initial vomiting of a single member of the party. This phenomenon has been touched on in popular culture: Notorious instances appear in the films Monty Python's The Meaning of Life (1983) and Stand By Me (1986).[16]

Intense vomiting in ayahuasca ceremonies is a common phenomenon. However, people who experience "la purga" after drinking ayahuasca, in general, regard the practice as both a physical and spiritual cleanse and often come to welcome it.[17] It has been suggested that the consistent emetic effects of ayahuasca — in addition to its many other therapeutic properties — was of medicinal benefit to indigenous peoples of the Amazon, in helping to clear parasites from the gastrointestinal system.[18]

There have also been documented cases of a single ill and vomiting individual inadvertently causing others to vomit, when they are especially fearful of also becoming ill, through a form of mass hysteria.[citation needed] 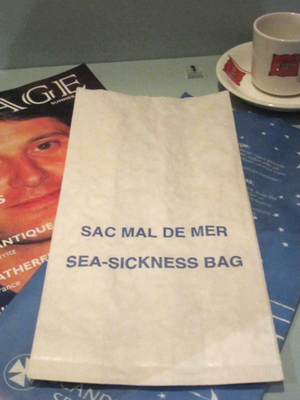 Special bags are often supplied on boats for sick passengers to vomit into.

Most people try to contain their vomit by vomiting into a sink, toilet, or trash can, as vomit is difficult and unpleasant to clean. On airplanes and boats, special bags are supplied for sick passengers to vomit into. A special disposable bag (leakproof, puncture-resistant, odorless) containing absorbent material that solidifies the vomit quickly is also available, making it convenient and safe to store until there is an opportunity to dispose of it conveniently.[citation needed]

People who vomit chronically (e.g., as part of an eating disorder such as bulimia nervosa) may devise various ways to hide this disorder.[citation needed]

An online study of people's responses to "horrible sounds" found vomiting "the most disgusting". Professor Trevor Cox of the University of Salford's Acoustic Research Centre said that "We are pre-programmed to be repulsed by horrible things such as vomiting, as it is fundamental to staying alive to avoid nasty stuff." It is thought that disgust is triggered by the sound of vomiting to protect those nearby from possibly diseased food.[19]

An antiemetic is a drug that is effective against vomiting and nausea. Antiemetics are typically used to treat motion sickness and the side effects of medications such as opioids and chemotherapy.[citation needed]

Evidence to support the use of antiemetics for nausea and vomiting among adults in the emergency department is poor.[23] It is unclear if any medication is better than another or better than no active treatment.[23]

Nausea and/or vomiting are the main complaints in 1.6% of visits to family physicians in Australia.[24]