Vorarlberg (German pronunciation: [ˈfoːɐ̯ʔaʁlbɛʁk]) is the westernmost federal state (Bundesland) of Austria. Although it has the second-smallest area (Vienna is the smallest) and population (Burgenland is less populated), it has the second-highest population density (after Vienna). It borders three countries: Germany (Bavaria and Baden-Württemberg via Lake Constance), Switzerland (Graubünden and St. Gallen) and Liechtenstein. The only Austrian state that shares a border with Vorarlberg is Tyrol to the east.

The capital of Vorarlberg is Bregenz (28,000 inhabitants), although Dornbirn (47,000 inhabitants) and Feldkirch (31,000 inhabitants) have larger populations. Vorarlberg is also distinct in that it is the only state in Austria where the local dialect is not an Austro-Bavarian, but rather an Alemannic dialect; it therefore has much more in common culturally with its Alemannic-speaking neighbours Switzerland, Liechtenstein and Swabia than with Bavaria and the rest of Austria.

The main rivers in Vorarlberg are the Ill (running through the Montafon and Walgau valleys into the Rhine), the Rhine (forming the border with Switzerland), the Bregenzer Ache and the Dornbirner Ach. One of the shortest rivers is the Galina. Important lakes, apart from Lake Constance are Lüner Lake, Silvretta Lake, Vermunt Lake, Spuller Lake, the Kops Basin and Formarin Lake; the first four were created for the production of hydroelectric energy. However, even before the dam for the power plant was built, Lüner Lake was the largest mountain lake in the Alps. Most of this hydroelectric energy is exported to Germany at peak times. At night, energy from power plants in Germany is used to pump water back into some of the lakes. 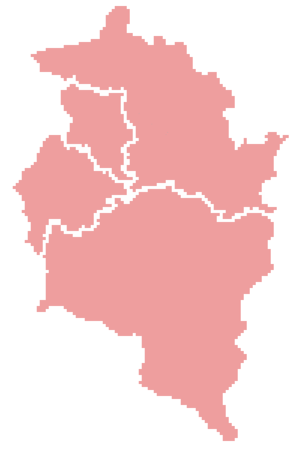 As there are several notable mountain ranges in Vorarlberg, such as the Silvretta, the Rätikon, the Verwall and the Arlberg, there are many well-known skiing regions (Arlberg, Montafon, Bregenzerwald) and ski resorts (Lech, Zürs, Schruns, Warth, Damüls, Brand and many more). Damüls is also recognized as the municipality with the most annual snowfall worldwide (on average 9.30 metres/30.5 feet). The highest mountain is Piz Buin, whose rocky peak of 3,312 metres (10866 ft) is surrounded by glaciers. Vorarlberg is supposed to enjoy the greatest scenic diversity within limited confines in the entire Eastern Alps; it adjoins the Western Alps. The distance from Lake Constance and the plains of the Rhine valley across the medium altitude and high alpine zones to the glaciers of the Silvretta range is a mere 90 km (56 mi).

Vorarlberg is divided into four large districts, from north to south: Bregenz, Dornbirn, Feldkirch and Bludenz. These districts appear on the automobile license plates in form of abbreviations: B, DO, FK and BZ.

For several years, the Vorarlberg economy has been performing well above the Austrian average. While the overall Austrian GDP in 2004 rose by a "mere" 2.0% in real terms, Vorarlberg recorded an increase of 2.9%. This came as a surprise, particularly as the major trading partners in Germany and Italy did not fare well. Owing to this robust economic performance, Vorarlberg was able to boost its gross regional product in 2004 to 11.5 billion EUR according to the Economic Policy Department of the Vorarlberg Chamber of Trade. This translates into a nominal increase of 5.0% (cf Austria as a whole +4.0%). The regional product per inhabitant in Vorarlberg is 31,000 EUR, exceeding the Austrian national average by 8%. Vorarlberg and especially the Rhine Valley is one of the wealthiest areas in the world, with a very high standard of living. In addition to the flourishing textile, clothing, electronics, machinery and packing materials industries of the Rhine Valley, there is also a broad agricultural base, especially in the Bregenz Forest (Bregenzerwald), which is noted for its dairy products (especially due to the "KäseStrasse Bregenzerwald",[1] an association of farmers, restaurateurs, craftspeople and traders promoting the Bregenz Forest agriculture and its local products) and tourism. The tourist industry employs a considerable number of Vorarlbergers. The greatest tourist attractions are the mountains and the numerous ski resorts, the largest (and best-known) of which are:

The population of Vorarlberg is 378,490 (2015). The majority (86%) of residents are of Austrian-Germanic stock with a cultural connection with Switzerland and Liechtenstein to the west and Germany to the north. A sizable proportion of the population's ancestors came from the Swiss canton of Valais in migrations of "Walsers", including the Swiss French in the 19th century by invitation during the days of the Austro-Hungarian Empire.[citation needed]. There has been a sizable minority of Turkish descent since the 1960s.

78% of the population are Roman Catholic, which puts Vorarlberg in line with the national Austrian average of 73.6%. The second-largest denomination, with a share of 8.4%, is Islam. 7,817 (or 2.2%) of Vorarlberg's inhabitants are Protestants.

Owing to their location isolated from the rest of Austria, most people in Vorarlberg speak a very distinct German dialect that other Austrians might have difficulty understanding, since the dialects in the rest of Austria form part of the Bavarian-Austrian language group, whereas the Vorarlberg dialect is part of the Alemannic dialect continuum. Alemannic dialects are also spoken in Liechtenstein, Switzerland (as Swiss German), Baden-Württemberg, the south west of Bavaria and the Alsace region of France. The Vorarlberg dialect is further divided into a number of regional sub-dialects (e.g. that of the Montafon, the Bregenz Forest and Lustenau are some of the most distinct) which tend to differ considerably from each other. In fact even within these regions the dialects may vary from one town or village to the next. 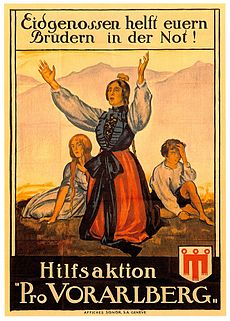 "Confederates, help your brothers in peril!" Swiss poster of the Pro Vorarlberg movement advocating for an accession of Vorarlberg, 1919.

Before the Romans conquered Vorarlberg, there were two Celtic tribes settled in this area: the Raeti in the highlands, and the Vindelici in the lowlands, i.e. the Lake Constance region and the Rhine Valley. One of the important settlements of the Vindelici was Brigantion (modern Bregenz), founded around 500 BC. The first settlements in and around Bregenz date from 1500 BC. A Celtic tribe named "Brigantii" is mentioned by Strabo as a sub-tribe in these region of the Alps.[3] The area of Vorarlberg was conquered by the Romans in 15 BC and it became part of the Roman province of Raetia. It was later conquered by Allemanic tribes in c. 450 AD.

The historically-Germanic province, which was a gathering-together of former bishoprics, was still ruled in part by a few semi-autonomous counts and surviving prince-bishops until the start of World War I. Vorarlberg was a part of Further Austria, and parts of the area were ruled by the Counts Montfort of Vorarlberg.

Following World War I there was a desire by many in Vorarlberg to join Switzerland.[4] In a referendum held in Vorarlberg on 11 May 1919, over 80% of those voting supported a proposal for the state to join the Swiss Confederation. However this was prevented by the opposition of the Austrian government, the Allies, Swiss liberals, the Swiss-Italians and the Swiss-French.[2][5]

Following the Second World War Vorarlberg found itself occupied by French troops from 1945 to 1955, along with most of the federal state of Tyrol.