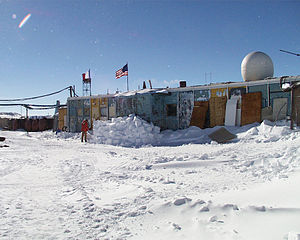 Vostok Research Station is about 1,300 km (≈800 mi) from the Geographic South Pole, at the center of the East Antarctic Ice Sheet and within the Australian Antarctic Territory. As a signatory to the Antarctic Treaty System, Australia does not exercise sovereignty over the territory.

Vostok is located near the Southern Pole of Inaccessibility and the South Geomagnetic Pole, making it one of the optimal places to observe changes in the Earth's magnetosphere. Other studies include actinometry, geophysics, medicine and climatology.

The only permanent research station located farther south is the Amundsen–Scott South Pole Station, operated by the United States at the geographic South Pole.

Some of the challenges faced by those living on the station were described in Vladimir Sanin's books such as Newbie in the Antarctic (1973), 72 Degrees Below Zero (1975), and others. 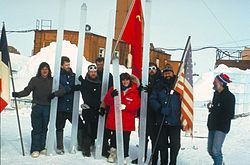 Ice cores drilled at Vostok, with a portion of the station behind

Vostok Station was established on 16 December 1957 (during the International Geophysical Year) by the 2nd Soviet Antarctic Expedition and was operated year-round for more than 37 years.[5] The station was temporarily closed from February to November 1994.[5]

In 1974, when British scientists in Antarctica performed an airborne ice-penetrating radar survey and detected strange radar readings at the site, the presence of a liquid, freshwater lake below the ice did not instantly spring to mind.[6] In 1991, Jeff Ridley, a remote-sensing specialist with the Mullard Space Science Laboratory at University College London, directed a European satellite called ERS-1 to turn its high-frequency array toward the center of the Antarctic ice cap. It confirmed the 1974 discovery,[7] but it was not until 1993 that the discovery was published in the Journal of Glaciology. Space-based radar revealed that the sub-glacial body of fresh water was one of the largest lakes in the world – and one of some 140 subglacial lakes in Antarctica. Russian and British scientists delineated the lake in 1996 by integrating a variety of data, including airborne ice-penetrating radar imaging observations and spaceborne radar altimetry. Lake Vostok lies some 4,000 meters (13,000 ft) below the surface of the central Antarctic ice sheet and covers an area of 14,000 km² (5,400 sq mi).[8]

Vostok Station Tractor: Heavy tractor АТТ 11 which participated in the first traverse to the South Geomagnetic Pole, along with a plaque to commemorate the opening of the station in 1957, has been designated a Historic Site or Monument (HSM 11) following a proposal by Russia to the Antarctic Treaty Consultative Meeting.[9]

Professor Kudryashov’s Drilling Complex Building: The drilling complex building stands close to Vostok Station at an elevation of 3488 m. It was constructed in the summer season of 1983–1984. Under the leadership of Professor Boris Kudryashov, ancient ice core samples were obtained. The building has been designated a Historic Site or Monument (HSM 88), following a proposal by Russia to the Antarctic Treaty Consultative Meeting.[10]

Vostok Station has an ice cap climate (EF), with subzero cold year round. The station sees an average of only 22 millimeters of precipitation per year (precipitation is very hard to measure; total snow accumulation is easier[11]). On average, Vostok station receives 26 days of snow per year.[11] It is by far the coldest spot on earth, with the lowest recorded temperature being −89.2 °C (−128.6 °F). The average summer temperature is −31.9 °C (−25.4 °F). Meanwhile, the average winter temperature is −68 °C (−90 °F), and the highest recorded temperature was −14.0 °C (6.8 °F). Vostok has the highest sunshine total for any calendar month, at an average of 708.8 hours of sunshine in December, or 23 hours daily. It also has the lowest sunshine for any calendar month, with a theoretical maximum of 0 hours of sunshine per month during polar night.[12] 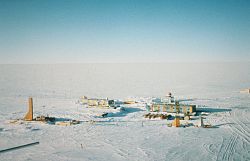 Panoramic photo of Vostok Station showing the layout of the camp. The striped building on the left is the power station while the striped building on the right is where researchers sleep and take meals. The building in the background with the red- and white-striped ball on top is the meteorology building. Caves were dug into the ice sheet for storage, keeping cores at an ideal −55 °C (−67 °F) year-round. (Credit: Todd Sowers LDEO, Columbia University, Palisades, New York.)

In addition to the extremely cold temperatures, other factors make Vostok one of the most difficult places on Earth for human habitation: In the 1970s the Soviet Union drilled a set of cores 500–952 m deep. These have been used to study the oxygen isotope composition of the ice, which showed that ice of the last glacial period was present below about 400 m depth. Then three more holes were drilled: in 1984, Hole 3G reached a final depth of 2202 m; in 1990, Hole 4G reached a final depth of 2546 m; and in 1993 Hole 5G reached a depth of 2755 m; after a brief closure, drilling continued during the winter of 1995. In 1996 it was stopped at depth 3623 m, by the request of the Scientific Committee on Antarctic Research that expressed worries about possible contamination of Lake Vostok. This ice core, drilled collaboratively with the French, produced a record of past environmental conditions stretching back 420,000 years and covering four previous glacial periods. For a long time it was the only core to cover several glacial cycles; but in 2004 it was exceeded by the EPICA core, which whilst shallower, covers a longer time span. In 2003 drilling was permitted to continue, but was halted at the estimated distance to the lake of only 130 m.

The ancient lake was finally breached on 5 February 2012 when scientists stopped drilling at the depth of 3770 meters and reached the surface of the sub-glacial lake.

The brittle zone is approximately between 250 and 750 m and corresponds to the Last Glacial Maximum,[20] with the end of the Holocene climatic optimum at or near the 250 m depth.

Although the Vostok core reached a depth of 3623 m the usable climatic information does not extend down this far. The very bottom of the core is ice refrozen from the waters of Lake Vostok and contains no climate information. The usual data sources give proxy information down to a depth of 3310 m or 414,000 years.[21] Below this there is evidence of ice deformation. It has been suggested that the Vostok record may be extended down to 3345 m or 436,000 years, to include more of the interesting MIS11 period, by inverting a section of the record.[22] This then produces a record in agreement with the newer, longer EPICA record, although it provides no new information.