Voting machines are the total combination of mechanical, electromechanical, or electronic equipment (including software, firmware, and documentation required to program control, and support equipment), that is used to define ballots; to cast and count votes; to report or display election results; and to maintain and produce any audit trail information. The first voting machines were mechanical but it is increasingly more common to use electronic voting machines.

A voting system includes the practices and associated documentation used to identify system components and versions of such components; to test the system during its development and maintenance; to maintain records of system errors or defects; to determine specific changes made after initial certification; and to make available any materials to the voter (such as notices, instructions, forms, or paper ballots).

Traditionally, a voting machine has been defined by the mechanism the system uses to cast votes and further categorized by the location where the system tabulates the votes.

Voting machines have different levels of usability, security, efficiency and accuracy. Certain systems may be more or less accessible to all voters, or not accessible to those voters with certain types of disabilities. They can also have an effect on the public's ability to oversee elections.

The first major proposal for the use of voting machines came from the Chartists in 1838.[1] Among the radical reforms called for in The People's Charter were universal suffrage and voting by secret ballot. This required major changes in the conduct of elections, and as responsible reformers, the Chartists not only demanded reforms but described how to accomplish them, publishing Schedule A, a description of how to run a polling place, and Schedule B, a description of a voting machine to be used in such a polling place.[2][3]

The Chartist voting machine, attributed to Benjamin Jolly of 19 York Street in Bath, allowed each voter to cast one vote in a single race. This matched the requirements of a British parliamentary election. Each voter was to cast his vote by dropping a brass ball into the appropriate hole in the top of the machine by the candidate's name. Each voter could only vote once because each voter was given just one brass ball. The ball advanced a clockwork counter for the corresponding candidate as it passed through the machine, and then fell out the front where it could be given to the next voter.

In 1875, Henry Spratt of Kent received a U.S. patent for a voting machine that presented the ballot as an array of push buttons, one per candidate.[4] Spratt's machine was typically British, allowing each voter to cast a fixed number of votes in a single race. In 1881, Anthony Beranek of Chicago patented the first voting machine appropriate for use in a general election in the United States.[5] Beranek's machine presented an array of push buttons to the voter, with one row per office on the ballot, and one column per party. Interlocks behind each row prevented voting for more than one candidate per race, and an interlock with the door of the voting booth reset the machine for the next voter as each voter left the booth. 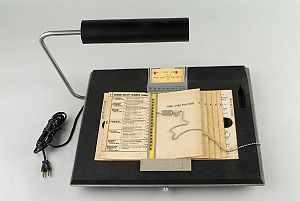 Punched card systems employ a card (or cards) and a small clipboard-sized device for recording votes. Voters punch holes in the cards (with a supplied punch device) opposite their candidate or ballot issue choice. After voting, the voter may place the ballot in a ballot box, or the ballot may be fed into a computer vote tabulating device at the precinct.

The idea of voting by punching holes on paper or cards originated in the 1890s[7] and inventors continued to explore this in the years that followed.[8] The first major success for punched-card voting came in 1965, with Joseph P. Harris' development of the Votomatic punched-card system.[9][10][11] This was based on IBM's Port-A-Punch technology. Harris licensed the Votomatic to IBM[12] William Rouverol built the prototype system.

The Votomatic system[13] was very successful. By the 1996 Presidential election, some variation of the punched card system was used by 37.3% of registered voters in the United States.[14]

Votomatic style systems and punched cards received considerable notoriety in 2000 when their uneven use in Florida was alleged to have affected the outcome of the U.S. presidential election.

An optical scan, or marksense, voting system allows a voter to record votes by making marks directly on the ballot, usually in voting response locations.

A paper-based system may allow for the voter's selections to be indicated by marks made on a paper ballot by an electronic input device.

Some traditionally non-document ballot voting systems may print a voter-verified paper audit trail (VVPAT) to serve as a document (ballot) for each vote.

The electronic ballot marker (EBM) is categorized as any such input device that does not independently record, store, or tabulate the voter selections. 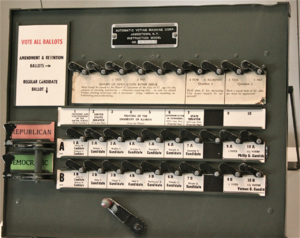 Commonly used in the United States until the 1990s (and commonly known as lever machines), direct recording voting systems are mechanical systems to tabulate votes. This was the first voting technology commercialized in the United States. In 1889, Jacob Myers of Rochester, New York received a patent for a voting machine that was based on Beranek's 1881 machine.[15] This machine saw its first use in Lockport, New York, in 1892.[16] In 1894, Sylvanus Davis added a straight-party lever and significantly simplified the interlocking mechanism used to enforce the vote-for-one rule in each race.[17] By 1899, Alfred Gillespie introduced several refinements. It was Gillespie who replaced the heavy metal voting booth with a curtain that was linked to the cast-vote lever, and Gillespie introduced the lever by each candidate name that was turned to point to that name in order to cast a vote for that candidate. Inside the machine, Gillespie worked out how to make the machine programmable so that it could support races in which voters were allowed to vote for, for example, 3 out of 5 candidates.[18]

On Dec. 14, 1900, the U.S. Standard Voting Machine Company was formed, with Alfred Gillespie as one of its directors, to combine the companies that held the Myers, Davis, and Gillespie patents.[19] By the 1920s, this company (under various names) had a monopoly on voting machines, until, in 1936, Samuel and Ransom Shoup obtained a patent for a competing voting machine.[20] By 1934, about 1/6 of all presidential ballots were being cast on mechanical voting machines, essentially all made by the same manufacturer.[21]

Commonly, a voter enters the machine and pulls a lever to close the curtain, thus unlocking the voting levers. The voter then makes his or her selection from a list of switches denoting the appropriate candidates or measures. The machine is configured to prevent overvotes by locking out other candidates when one candidate's switch is flipped. When the voter is finished, a lever is pulled which opens the curtain and increments the appropriate counters for each candidate and measure. The results are then hand written by the precinct officer at the conclusion of voting. New York is the last state to stop using these machines.[22][23]

The successor to direct recording voting machines, a direct-recording electronic (DRE) voting system records votes by means of an electronic display provided with mechanical or electro-optical components that can be activated by the voter; that processes voter selections by means of a computer program; and that records that processed voting data in memory components. It produces a tabulation of the voting data that is stored in a removable memory component and may also provide printed renditions of the data. The system may further provide a means for transmitting the processed vote data to a central location in individual or accumulated forms for consolidating and reporting results from precincts at a central location. DRE systems additionally can produce a paper ballot printout that can be verified by the voter before they cast their ballot.

A public network DRE voting system is an election system that uses electronic ballots and transmits vote data from the polling place to another location over a public network. Vote data may be transmitted as individual ballots as they are cast, periodically as batches of ballots throughout the election day, or as one batch at the close of voting.

A precinct-count voting system is a voting system that tabulates ballots at the polling place. Generally, systems that hand count the ballots will tabulate the ballots only after the close of polling. Other voting systems typically tabulate the ballots as they are cast. In all systems, the vote totals are made public only after the close of polling. For DREs and some paper-based systems these systems provide electronic storage of the vote count and may transmit results to a central location over public telecommunication networks. This system allows for voters to be notified of voting errors such as over voting and can prevent residual votes.

A central count voting system is a voting system that tabulates ballots from multiple precincts at a central location. Voted ballots are typically placed into secure storage at the polling place. Stored ballots and/or Precinct Counts are transported or transmitted to a central counting location. The system produces a printed report of the vote count, and may produce a report stored on electronic media suitable for broadcasting, even over the Internet.